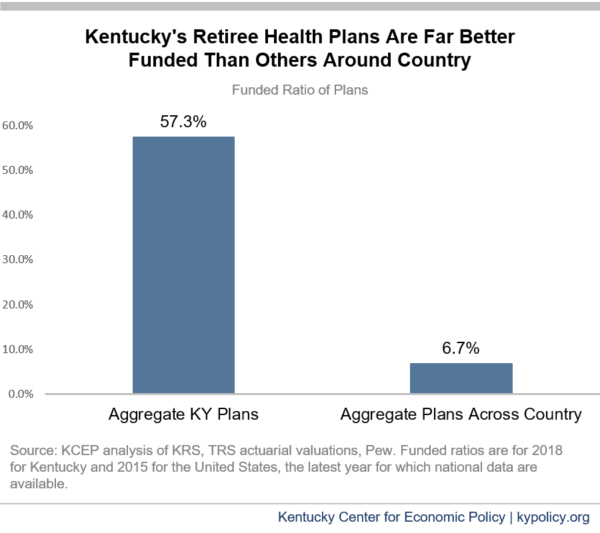 The Kentucky Supreme Court threw out the 2018 pension bill on procedural grounds today, ruling that it violated the constitutional requirement that a bill receive three readings on three different days in each chamber. Since the court didn’t rule on the legality of the benefit changes in the bill, the General Assembly could try to reenact it.

But doing so would cause harm to teachers and public employees and make it harder to attract and keep qualified workers for vital public services. At the same time, the bill will not materially improve the financial condition of Kentucky’s pension plans, which just need proper funding over time.

Here’s what the bill would do:

The bill would eliminate the defined benefit pension plan for new teachers and enroll them in a less secure hybrid cash balance plan where benefits depend on market returns. Because Kentucky teachers do not participate in Social Security, which is a defined benefit plan, a shift to a cash balance approach would make their entire retirement income dependent on market returns over their working lives.

In addition, by ending the inviolable contract for new teachers, the bill would allow the legislature to cut benefits further at any point in a teacher’s career (protecting only what they have already earned). Current teachers, in contrast, have a legally protected benefit established when they are hired, providing the security of knowing what income they will receive once their service is completed.

Because hybrid plans are individual accounts with a final balance, the new plan would also include no cost of living adjustment (COLA) as exists in the teachers’ current pension plan (annuities could be structured under the cash balance plan so retirees receive higher incomes later in life, but only by sacrificing benefits in earlier years). The 1.5 percent annual COLA is part of the current defined benefit plan because the plan is a replacement for Social Security, which has a COLA that has averaged 2.1 percent over the last 20 years.

The bill also caps the use of sick leave current teachers can use in calculating retirement benefits, limiting it to the amount of sick leave accrued as of December 31, 2018. And the bill raises the age of retirement eligibility for new teachers.

The pension bill shifts about 1/3 of the employer cost of the hybrid cash balance plan to school districts, which must contribute 2 percent of new teachers’ pay for the benefit. This change would continue the trend of state government backing away from its responsibility to fund K-12 education and asking local school districts to bear a larger share of costs. That pattern is creating a growing gap between rich and poor school systems, a gap that is returning to levels that were declared unconstitutional in the 1980s.

State and local workers would get another pension benefit cut

The bill would require employees in the Kentucky Retirement Systems (KRS) hired between 2003 and 2008 to pay an additional 1 percent of pay for retiree health care. This extra contribution is unnecessary, as Kentucky’s retiree health plans are already in strong shape and far better funded than most such plans across the country. Retiree health does not have to be pre-funded at all, and many states make the practical decision to fund them on a pay-as-you-go basis. Because Kentucky currently pre-funds, our plans are 57.3 percent funded in the aggregate while retiree health plans across the country were only 6.7 percent funded as of 2015, as shown in the graph below.

Despite false claims that the plans will “collapse” if the bill does not become law, analysis from the systems’ actuaries show the pension bill would not materially change the condition of the plans. And as shown below, the systems will improve over time through steady, consistent funding. 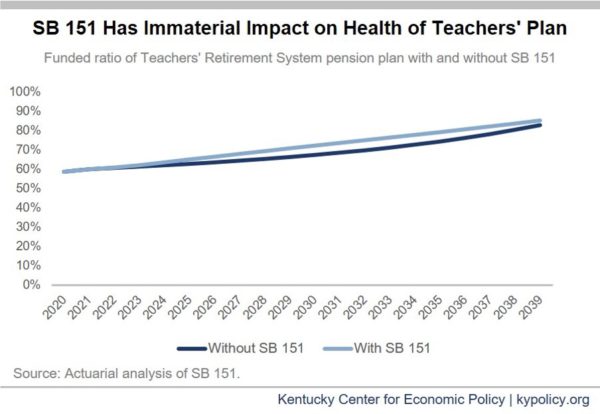 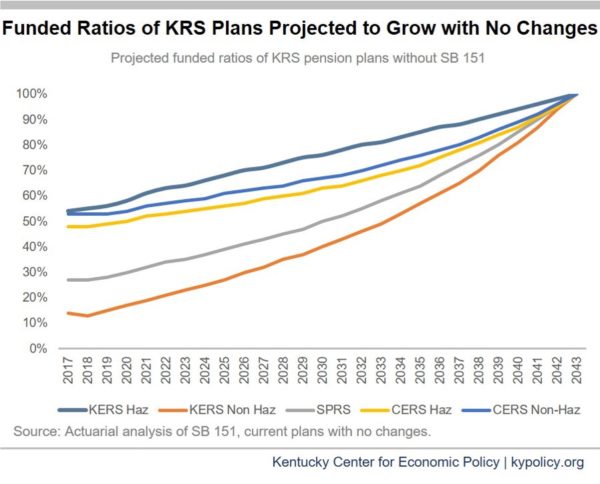 The gains from improved funding in recent years are already evident in the results from 2017, 2018 and the first quarter of 2019. The legislature resumed responsible funding for the KERS and SPRS plans in 2015 and the Teachers Retirement System (TRS) in 2017. Public pension plans do not have to have 100 percent funded ratios to be healthy: As research by the Haas Institute at the University of California, Berkeley shows, plans can exist in perpetuity at lower funding levels. Straining to achieve a 100 percent funded ratio can result in damaging trade-offs while creating new risks.

The severely underfunded KERS non-hazardous plan is in need of carefully adequate contributions to ensure it continues on the growth path identified above, and to a lesser extent the small State Police Retirement System as well, but the other Kentucky plans are not facing a crisis situation.

The bill introduces a 401a defined contribution (DC) option for state and local non-hazardous employees that will divert funds from the pension plans, worsening existing problems.

Although DC plans are riskier for employees and will earn lower investment returns over time, the KRS actuary projects 25 percent of employees could end up in the DC plan. Workers who choose the DC plan would not participate in the hybrid cash balance plan, and could not later switch back. The more employees who take part in the DC plan instead of paying into the defined benefit/cash balance plan pool, the worse the cash flow problems for the existing plans. A drop in contributions from active employees could require plans to keep more of their assets liquid in order to pay current benefits, resulting in lower investment returns. This is especially a concern for the KERS non-hazardous plan.

TRS is already on a positive growth path, especially since state funding was restored in 2017, and the system holds a substantial $20 billion in assets. Nonetheless, Senate Bill 151 would require the state to front-load costs of reducing TRS unfunded liabilities through what is called a “level dollar” method. This method makes the pessimistic assumption that the cost of paying teachers will not increase over the next few decades — meaning that in 30 years, Kentucky will have no more teachers than it has today, and will pay them no higher salaries than they are being paid now. Level dollar funding harms the state budget in the short-term, unnecessarily shifting costs from future years — when the economy will be bigger and state revenue higher — to the present, as shown in the graph below. 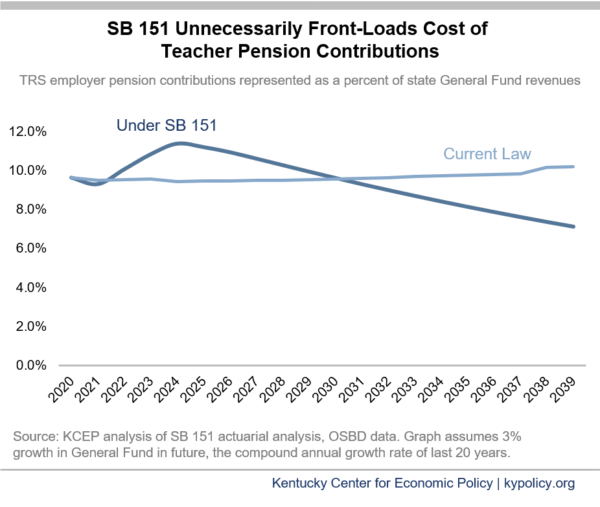 The net result of that change, which would be phased in over four years, is that the state will have to find an additional $250 million in 2024 to contribute to TRS than would otherwise be the case. That is three times more money than what the state of Kentucky appropriates for preschool.

Reenacting Senate Bill 151 would cause unnecessary harm. Instead, Kentucky could create a reasonable, commonsense funding schedule that eases the pressure to fund pensions even while improving the systems’ health and fully assuring benefits will be there for teachers and public employees. And we can generate new revenue by cleaning up the tax code. The legislature should open up the conversation and gather the public input and expert opinion needed to create a funding plan that truly works for Kentucky.