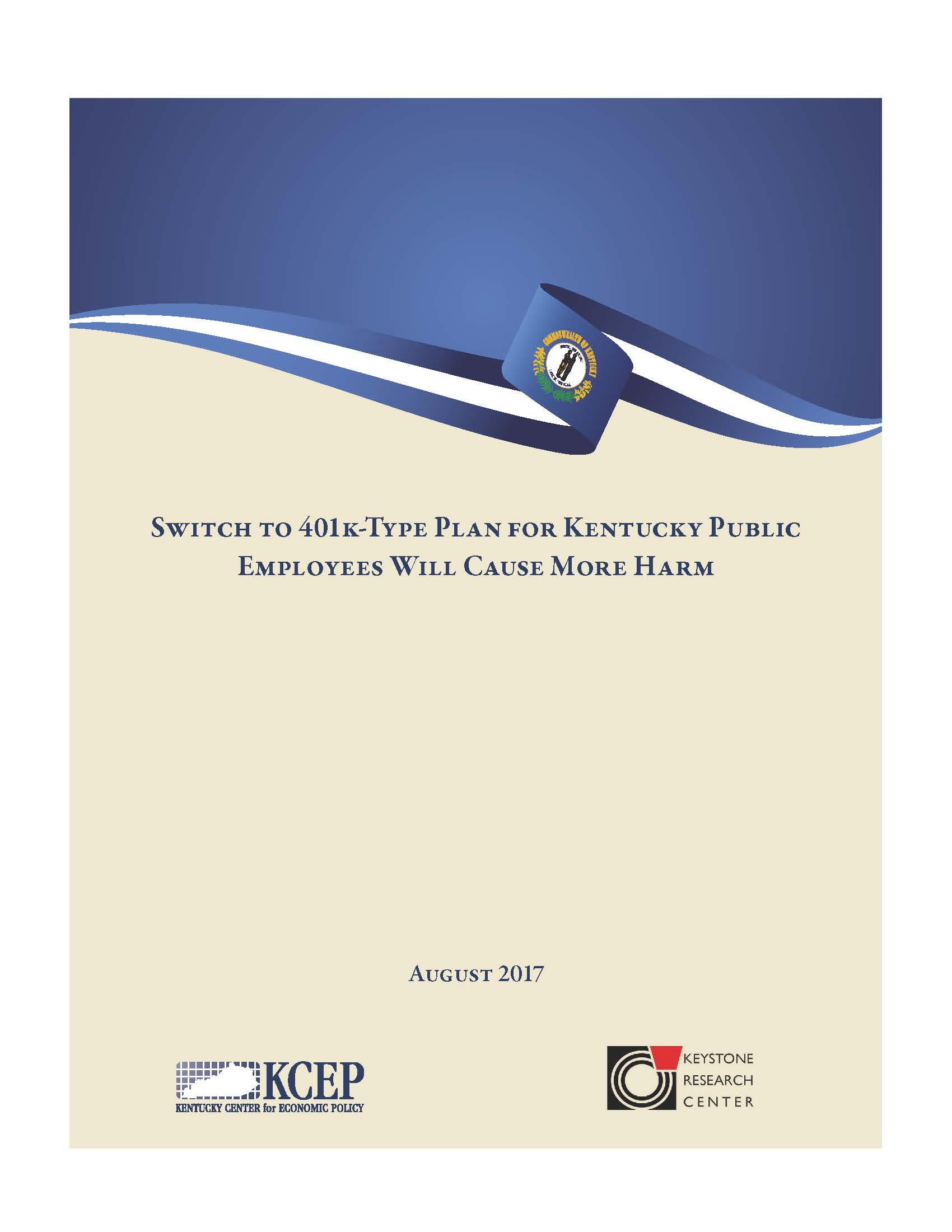 Kentucky needs solutions that work to pay down its unfunded pension liabilities. A new report from the Kentucky Center for Economic Policy and the Keystone Research Center shows shifting state employees to inefficient 401k-type defined contribution plans won’t reduce the liabilities but will make the funding challenge worse while harming the workforce and economy. Highlights from the report are below.

Defined Contribution Plan Will Fail to Save Money Compared to Inexpensive Existing Plan While Introducing New Costs
Regular costs of state pension plans are already low, and plans have been through multiple rounds of cuts.

New Kentucky employees contribute more toward their pensions than does the state, and the low state contribution is comparable to what private sector employers contribute for 401k plans and Social Security. The legislature already cut benefits and required more years of service for retirement eligibility in 2008, ended cost of living adjustments for state worker retirees in 2012 and moved new state and local employees into a hybrid cash balance plan that shifts risk to those workers in 2013.

Past actuarial analyses of moving Kentucky workers to a defined contribution plan and creating a hybrid plan showed they would be no cheaper for new workers than the existing defined benefit plan.

Switch would make it more expensive to pay down unfunded liabilities.

A switch to defined contribution plans would close the existing pension plans to new members, which would lower investment returns on the existing plans’ assets over time, adding large costs to pay down unfunded liabilities. Studies in 14 states that have considered a switch to defined contribution plans projected that closing a defined benefit plan lowers investment returns and increases the costs of paying down legacy debts.

Switch would raise costs by making it harder to attract and retain a skilled workforce.

Kentucky public employees already make less in total compensation than comparable workers do in the private sector, research shows. Especially since governments are large, permanent employers, it makes sense for them to use defined benefit pensions as a tool to compete for qualified workers in lower paying public sector jobs. Workers in positions that provide defined benefit pensions tend to have lower turnover and longer average tenure, meaning lower recruitment, hiring and training costs for employers.

A less secure retirement from inferior 401k-type plans would also harm local economies where pension benefit checks play a major role, and raise public benefit costs as more workers retire into poverty. Pension benefits inject $3.4 billion into the Kentucky economy each year. As those monies are spent at local businesses, they have a multiplier effect that results in the creation of jobs.