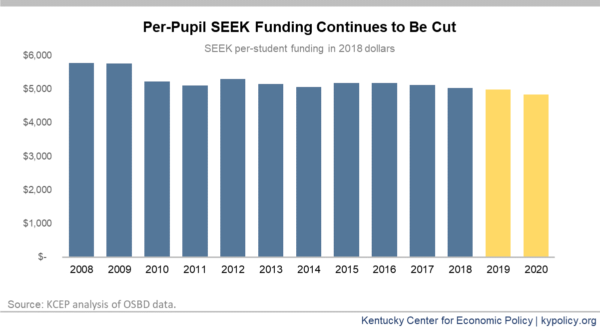 This year as kids head back to school, Kentucky school districts face challenges due to cuts in state funds, ranging from no funding for textbooks and professional development to cuts to preschool. More than a decade of cuts, including those in 2019, threaten the quality of P-12 education and will contribute to the widening per-pupil funding gap between the state’s poorest and wealthiest school districts.

Funding Makes a Difference to Kids and Classrooms

Research shows adequate school funding makes a big difference in student success in school and beyond, and can help address achievement gaps between wealthy and poorer students and communities. Our previous report based on a survey of school districts shows that Kentucky’s underfunding of P-12 education is hurting classrooms and students. Between 2008 and 2018 many districts had to reduce course offerings, school-based services, the number of staff, the number of instructional days and more. Some districts have pushed more costs onto parents through instructional and extracurricular fees – a form of school funding which disadvantages poorer districts and families.

Last year Kentucky ranked 3rd worst in the nation for per-student cuts to core school funding — which in the commonwealth is the SEEK formula — since the Great Recession (and even before then, by many measures school funding was inadequate). The new state budget did not meaningfully increase SEEK funding in 2019, a funding stream that includes the guaranteed base amount, transportation, Tier I, teachers’ retirement system employer match and other costs. This continues more than a decade of damaging cuts to state funding for education in Kentucky, making it a 14 percent cut in total SEEK funding per student between 2008 and 2019 once inflation is taken into account.

Part of this decline in total SEEK funding per student has to do with the state’s underfunding of school transportation since the mid-2000s. As shown in the graph below, the state has only been paying a portion of the statutorily required amount over the past 15 years. In 2019, it’s estimated that the state will be contributing just 60 percent of these costs, and it will fall on school districts to come up with the rest of what it takes to get students to and from school. And when it comes to making up for state funding cuts, wealthier school districts are in a much better position to do so than poorer districts. This can impact the state’s ability to address achievement gaps as districts facing greater economic challenges may have to cut critical programs and services more deeply than other districts. 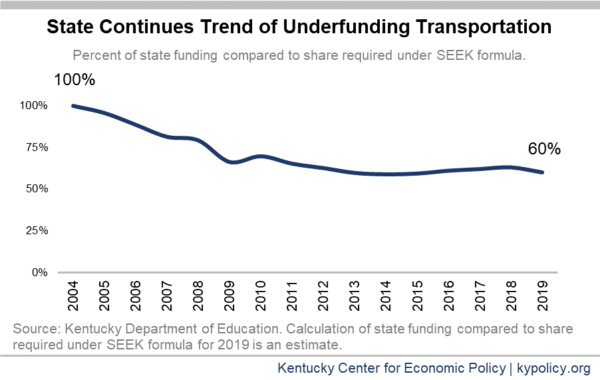 SEEK, our core funding for schools, isn’t the only funding stream that has been cut repeatedly in the past and in the new budget. As shown in the table below, the additional round of cuts in the current school year results in significant cuts to important student support programs. In our survey of school districts, respondents consistently expressed their concern about the impact on students and classrooms from a lack of funding for textbooks, professional development and after-school programs (Extended School Services).

Zero state funding for the basics of classroom learning such as instructional materials/textbooks and professional development for teachers will inevitably take a toll. A 2014 study of education funding adequacy in Kentucky recommended, as a best practice, funding textbooks and other instructional materials at a rate of $120 to $150 per student each year. Citing research, the report notes, “the need for up-to-date instructional materials is paramount. Newer materials contain more accurate information and incorporate the most contemporary pedagogical approaches.” The study also recommended significant additional investments in professional development, which can play an important role in promoting effective classroom instruction – key to improving learning and reducing achievement gaps.

After-school programs, which are a critical support for students, were also cut by 6.25 percent in 2019 — for a cumulative cut of 39 percent (in inflation-adjusted terms) since 2008. Extended school services have been shown to produce positive academic outcomes and help close achievement gaps.

Districts Have Even Less Funding for Preschool

Already-inadequate state funding for preschool was also cut by 6.25 percent in 2019. Last year it was reported that just 40 percent of school districts had full-day preschool — which has been shown to be more effective than half-day programs at promoting academic success. The state only provides funding for half-day preschool and does not fund preschool transportation, placing greater pressure on struggling local school districts to cover additional costs.

Funding Gap Between Poorest and Wealthiest Districts Continues to Grow

As described, inadequate funding for education from the state means local districts have to make up the difference. As a result, the gap is growing between what we spend in state and local dollars, per-pupil, in the state’s wealthiest and poorest school districts. An equal education for every child across the commonwealth was one of the central mandates of the Rose Decision in 1989, the court case that led to the Kentucky Education Reform Act (KERA). But the graph below, which updates our 2017 report, shows that Kentucky is continuing to creep back towards pre-KERA levels of inequity. 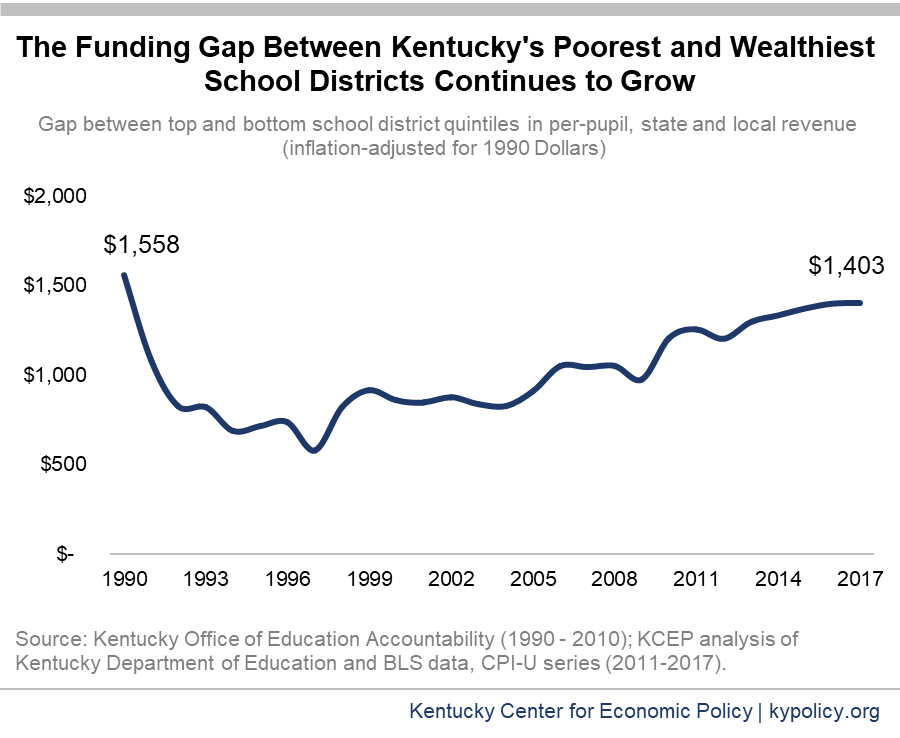 Despite increasing fiscal strain due to inadequate state funding, our districts are figuring out a way to open the doors on the first day of school and keep them open this year. The specific decisions they make to balance increasingly tight budgets remain to be seen. Will they schedule even fewer instructional days? Provide students with no new textbooks? Increase class sizes? Be less likely to offer full-day preschool? Eliminate more courses, programs and student supports? Further increase fees for parents?

In the long run, if we want to provide a high-quality education to all Kentucky students — address achievement gaps and set our kids, and the commonwealth’s economy, up for a bright future — we need to fund education more adequately.