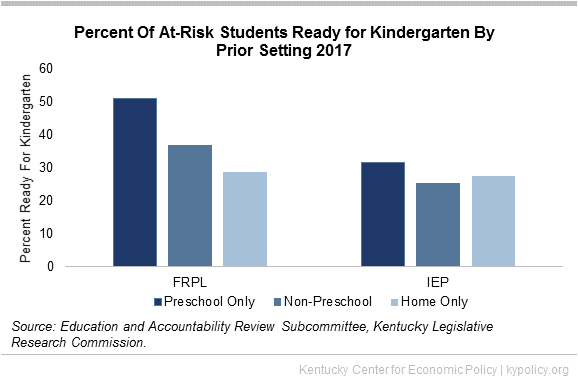 High quality early childhood education has long been understood to be an important investment with a significant return. While our state has done more in recent years to expand access to preschool and full-day kindergarten, a new report from the state Legislative Research Commission shows there is real need for additional investments.

The report describes how effective our state’s preschool program is at preparing children for kindergarten — especially those from low-income households or who have disabilities. However, while full-day preschool is shown to be most effective just 40 percent of Kentucky school districts offer more than a half-day preschool program, largely due to funding constraints.

Kentucky’s public school districts are required to provide free preschool for three-year-olds and four-year-olds with disabilities and four-year-olds with household incomes up to 160 percent of poverty. For all other four-year-olds interested in enrolling, school districts can enroll students as space permits and may charge tuition, which 61 did in 2017. Tuition rate range from $900 to $5,550 a year, and 4 schools tie tuition rates to parental income. Two districts, Lee County and Wolfe County, do not currently provide preschool services but instead serve preschool students by contracting with their local Head Start providers. 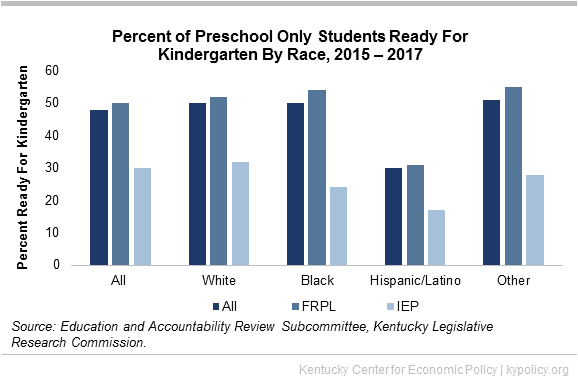 However, it is important to note that for Hispanic/Latino students even preschool attendance unfortunately doesn’t mitigate the achievement gap for kindergarten readiness — an important area for further investigation. It is also notable that less than half of all Limited English Proficiency (LEP) students participate in state-funded preschool despite more than 80 percent qualifying for FRPL. The report recommends school districts, with support and guidance from KDE, complete a needs assessment analysis to determine whether the educational needs of preschool-aged LEP students are being met and to explore possible resources to assist in meeting their needs.

Preschool programs in Kentucky can be either half-day (a minimum of 2.5 hours of classroom time each day) or full-day. Half-day preschool can be five days a week or four days with the fifth day used to provide children and families with services such as home visits or special experiences for children. However, another option is for districts to have a locally designed option approved by the commissioner of education.

Preschool has a particularly positive impact on students who attend for more than 16 hours a week. The average rate of kindergarten readiness in districts with more than 16 hours of scheduled preschool time per week is 13 percentage points higher than in districts with less than 12 hours of preschool per week (54.9 percent compared to 41.9 percent). However, just 40 percent are providing full-day preschool 4 or 5 days a week (districts are only required to offer a half-day program four days per week). 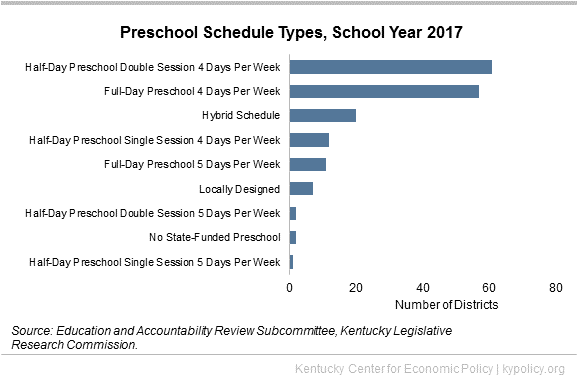 For cost reasons, seven districts currently have only a preschool program consisting of two full days (six hours each day). Most of these districts specifically said they would be able to reduce transportation costs and salaries as a result — with 1 district reportedly saving $198,000 per year and the other, which served fewer students, claiming they would save $52,000 a year. The report notes there may be new cost pressures in the near future due to changes in the federal Head Start program that will result in more students instead attending state-funded preschool. New performance standards set by the Federal Department of Health and Human Services require that if a Head Start program operates in a service area with high quality publicly funded full-day preschool, the Head Start program must prioritize serving young children; this means many Head Start programs will have to shift their funding slots from four-year-olds to three-year-old Early Head Start children. In addition, Head Start will not be allowed to offer double sessions. As result, public preschool programs should expect to serve more four-year-old students.

It is also important to note districts that are able to offer daycare to preschoolers have better enrollment. Some school districts have had challenges recruiting preschool students despite increased access due to changes in the income requirements (most recently by increasing eligibility from 150 percent of poverty to 160 percent); overall preschool enrollment has actually declined. Just 41 districts out of 167 that responded to a survey question reported they offer some form of preschool combined with daycare services in at least some of the schools in their district.

However, some districts aren’t able to afford full-day kindergarten as the state only requires and provides funding for half-day, and funding cuts for K-12 education have been putting further pressure on local districts, making it difficult to maintain existing levels of services let alone do more. The report notes Kentucky has the lowest per-student kindergarten funding of all its bordering states.

“It is expensive to cover the cost of full day Kindergarten because it is only covered at 50 percent. These students need services quickly and they are funded the least. Earlier intervention is key for [kindergarten] students.”

A Western Kentucky district, with a little over half of their students living in poverty, stated:

“The half day of state unfunded kindergarten costs and the 40 percent of unfunded transportation costs seriously and negatively impacts our district. If the district did not have to bear the impact of the unfunded half day and the 40 percent loss of transportation we would be able to provide more mental and behavior[al] support for schools, more Response To Intervention (RTI) interventionists for our struggling students, lower teacher to student ratios, college and career coaches, and other very needed supports for our schools.”

Additional state funding for districts to provide full-day preschool and kindergarten, as well as supports such as child care, is critical to improving education in Kentucky. And we don’t want to go even further backward, by continuing to cut education more.