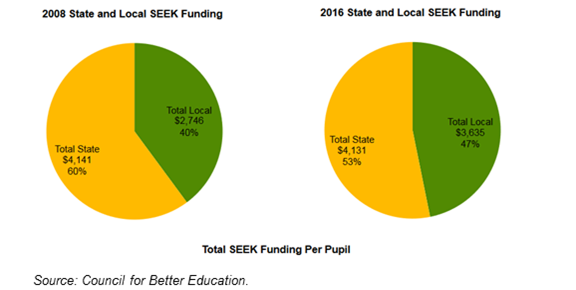 The beginning of a new school year is often a time of excitement for kids, parents and educators. But it’s also a time state funding cuts and freezes to K-12 education may create difficulties for some school districts as they make decisions about what they can and cannot afford.

In last year’s report on K-12 funding by the Center on Budget and Policy Priorities, Kentucky continued its decline in national education funding rankings, sliding to third worst in the nation based on cuts in per-student core formula funding for local schools, which in Kentucky is known as SEEK. Kentucky ranked sixth worst in the previous year’s report. SEEK funding declined 13.1 percent between 2008 and 2016 once inflation was taken into account. Our state also received an “F” in Education Week’s 2017 Quality Counts report for education spending — ranking us 37th in the nation.

A recent report by Moody’s indicates these funding problems will worsen when Kentucky’s first charter schools open, likely next year.

Research shows school funding makes a real difference in children’s lives, with adequate school funding being important to student success. One study found when school spending increased by 10 percent, over the 12 years a low-income child was in attendance, that child was less likely to be poor as an adult, more likely to graduate from high school and had a nearly 10 percent increase in earnings as an adult. Another study found the achievement gap between rich and poor students shrank by around 20 percent in school districts located in states where funding reforms took place to address wealth inequities among districts — while the gap grew in states where there was no funding reform.

Kentucky is a state that benefitted from such reforms. The Kentucky Education Reform Act (KERA), enacted in 1990, established a funding system that provides more financial assistance to low wealth school districts. The funding formula relies on state resources to equalize funding among rich and poor districts, with more state funds going to low-wealth districts in recognition of their diminished capacity to raise funds. Immediately after the passage of KERA, funding disparities between wealthy and poor districts were reduced, and overall school funding in Kentucky was more equitable. Unfortunately, funding inequalities among school districts have been on the rise in recent years due to state budget cuts and funding freezes — and the gains we made through KERA are at risk.

A funding formula is only as good as its funding level, and reductions in state contributions for education have increased the pressure on local school districts to make up for reductions with additional local levies. But districts with low property values have substantially less capacity to generate additional funds than districts with high property values. According to the 2017 Quality Counts report, the difference in per-pupil spending between the highest- and lowest-spending districts in Kentucky is $2,343.

As shown in the graph below from an analysis by the Council for Better Education, 40 percent of SEEK funding per pupil was from local sources in 2008. This amount grew to 47 percent in 2016.

You can see how individual districts have fared here.

A particular area of current concern in school district funding in Kentucky is the transportation component of the SEEK formula. The statutes establish a formula for determining the amount of transportation funding each school district should receive based on the characteristics of that district. Beginning in the late 2000s as part of the budgeting process, the General Assembly elected to only partially fund this part of the formula, resulting in a transportation amount in the SEEK formula substantially less than the total cost determined under the formula. This means local districts must use their own resources to make up the difference. The graph below shows the shift in funding for student transportation to local school districts as a result of this reduction. 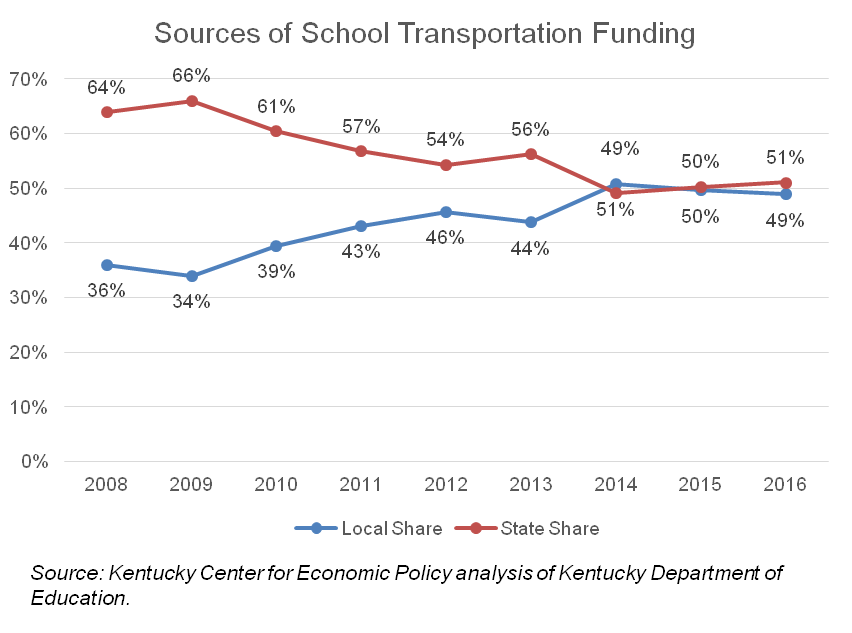 The growing reliance on local sources to fund school districts has widened funding inequities among districts. Poorer school districts have a harder time raising the revenue needed to make up for declining state funding. The same local property tax increase yields 10 times more funding per student in the richest Kentucky school districts than the poorest ones. Between 2000 and 2010, the gap in per-pupil state and local spending between the richest 20 percent of Kentucky school districts and the poorest grew by 40 percent, and it has continued to widen. If additional state resources are not devoted to education funding in the upcoming budget, the already wide gap between wealthy and poor districts will continue to increase, placing further strain on schools, especially the poorer districts that simply lack the capacity to contribute more. These inequities make it less likely that Kentucky will achieve the goal of providing equal educational opportunity for all children.