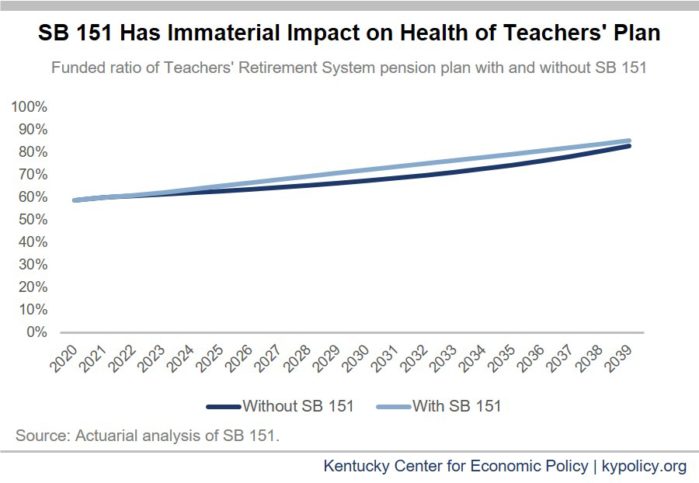 As the pension bill that passed in the 2018 session awaits a ruling from the state Supreme Court, we’re hearing false claims the systems will collapse if the bill is struck down. Those warnings are not based on analysis done by the systems’ actuaries or plausible scenarios of the future.

In a recent interview with The Hill, the governor stated that striking down the bill “would destroy the pension system in Kentucky. There’s a 100 percent chance the system fails.” Likewise, he told reporters “whether or not the systems survive” is at stake in the ruling. And the governor’s Twitter account tweeted that “Kentucky’s pension systems will COLLAPSE” without the bill, with the Kentucky Employees Retirement System (KERS) “likely insolvent by 2022” and the Teachers Retirement System (TRS) “likely insolvent by 2036.”

The actuarial analysis to the bill itself takes issue with these claims. Changes in the bill have little to no effect on existing unfunded liabilities, which exist primarily for already retired employees and secondarily for current workers, most all of whom have their benefits covered by the inviolable contract. SB 151 makes little-to-no difference in the funded ratios of the plans, which are projected to improve without the changes the bill makes, as shown in the graphs below. 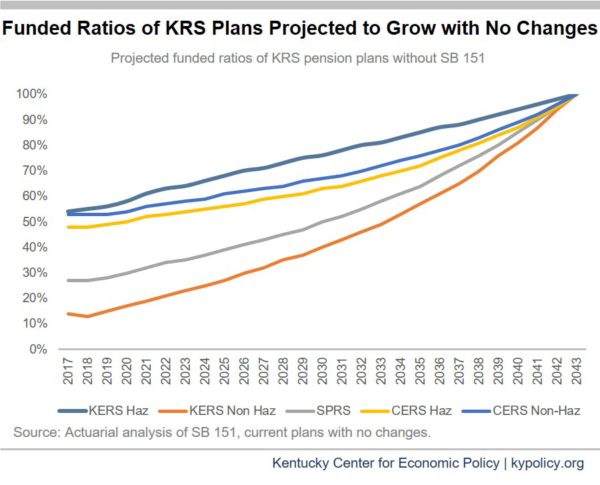 The specific claims that the plans will run out of money by dates in the near future are not based on realistic scenarios. The assertion the KERS non-hazardous system will be insolvent by 2022 and TRS in 2036 are among a number of alternatives in the PFM report, but would happen only if we revert to underfunding the plans — which no one is proposing — and if the plans earn low rates of return. The 2036 insolvency date for TRS assumes the state underfunds contributions and the plan earns only 3.87 percent investment returns (a corporate bond index rate) between now and then. Actual TRS investment returns range from 6.1 percent over the last 20 years to 9.2 percent over the last 5 years.

We need a careful, responsible and commonsense plan for funding pensions moving forward. The first step to getting there is for all to engage in good faith discussion based on actual facts.