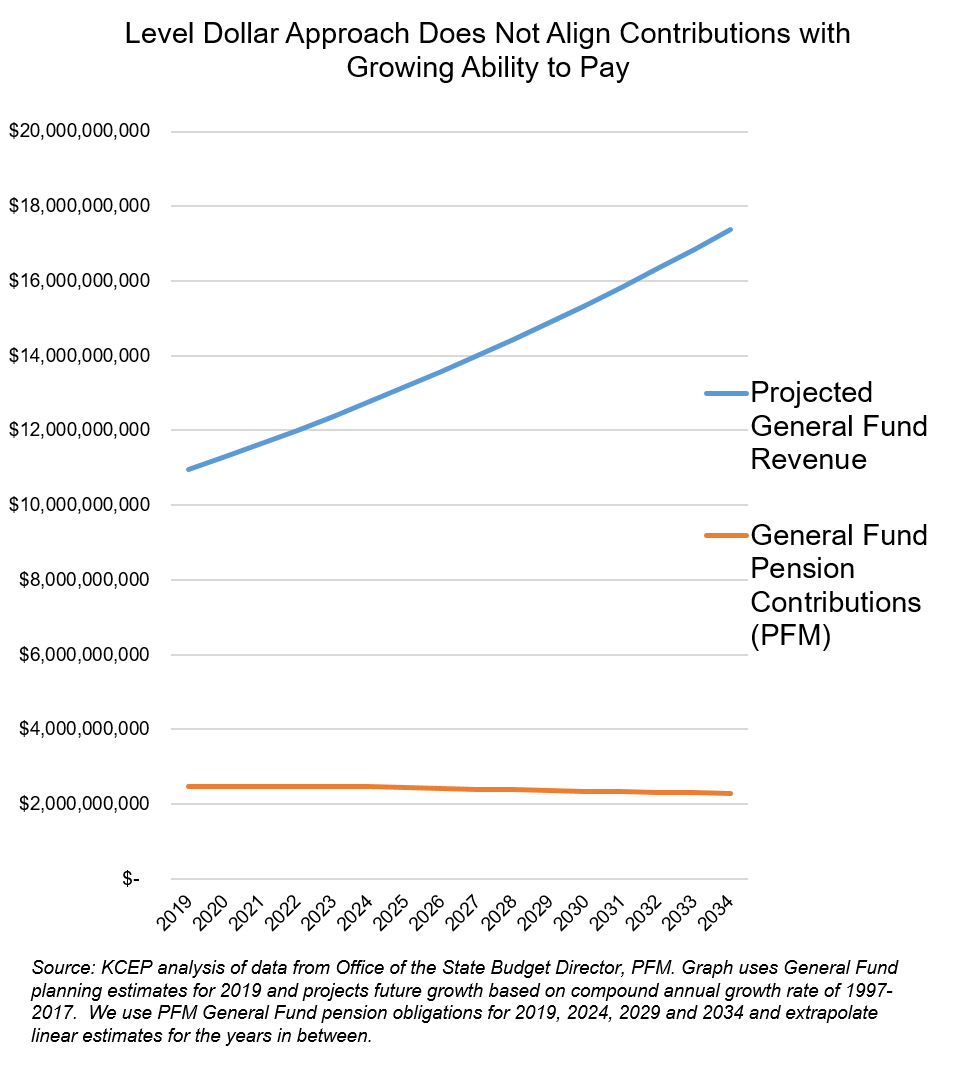 The proposed level dollar approach to funding Kentucky’s pension liabilities would shift a large burden to our upcoming state budget and ask comparatively little from budgets a couple of decades from now. Especially without any new revenue, the method creates pressure for harsh and unacceptable benefit cuts to retirees and workers along with unnecessarily damaging budget cuts that will further undermine key services.

This proposal to pay down all plans’ liabilities under a level dollar method comes from state consultant PFM. Under the approach, payments would be about the same dollar amount each year until liabilities are paid off. Level dollar is in contrast to the much more common level percent of pay approach Kentucky currently uses, which distributes payments over time as an equal percentage of what employers spend on workers’ salaries.

That change, combined with much lower investment return assumptions, would add a hefty $1 billion in General Fund costs to the state budget in 2019, according to PFM’s report. In total, General Fund obligations for pensions would equal $2.47 billion in 2019 or a massive 23 percent of Kentucky’s General Fund budget.

With a level dollar approach, 15 years later the General Fund contribution for pensions will be roughly the same as in 2019, at $2.29 billion. But the commonwealth’s ability to pay will be higher later due to inflation and growth in the economy in the intervening years.

To illustrate this difference: Over the last 20 years, General Fund revenue has grown by an average of 3.1 percent per year. If that modest trend continues in the future, the state will have 59 percent more revenue in 2034 than it will have in 2019, as the graph below shows. Yet, as mentioned, under the level dollar method the state would be paying no more toward pensions in 2034 than it is in 2019. The level dollar approach heavily front loads costs as a share of spending, squeezing everything else in the budget during the early years. The level percent of pay method, in contrast, aligns contributions with the state’s ability to pay.

In an ideal world, it would be great to pay off debts as soon as possible with much bigger payments up front. But there are trade-offs to doing so — especially when new resources are not available to make those contributions. And as we describe here, there is no strong argument within the systems for using level dollar for Kentucky’s better-funded pension plans like those for teachers and local employees.

Moving to a level dollar approach for all plans would place a major hardship on the budget in 2019 and the years immediately thereafter, even as the General Assembly has not yet put any new revenue on the table to pay for it. These increased contributions will require deeply damaging cuts to investments in education, health and human services, infrastructure and more. Already, Kentucky faces budget gaps ranging from a crisis in social worker caseloads to rising inequity between rich and poor school districts, soaring college tuition and a lack of employee raises.

Kentucky also cannot fund these dramatically higher payments by breaking promises to retirees and workers, such as through PFM proposals to roll back cost of living adjustments and raise the retirement age for current workers. And shifting to 401ks won’t help.

Instead, Kentucky needs a responsible and reasonable plan for paying down its liabilities over the coming decades — one that protects our critical public investments and steps up to meet our obligations to workers and retirees. Simply shifting to the level dollar method for all plans and putting no new revenues forward to pay for it would not meet that test.