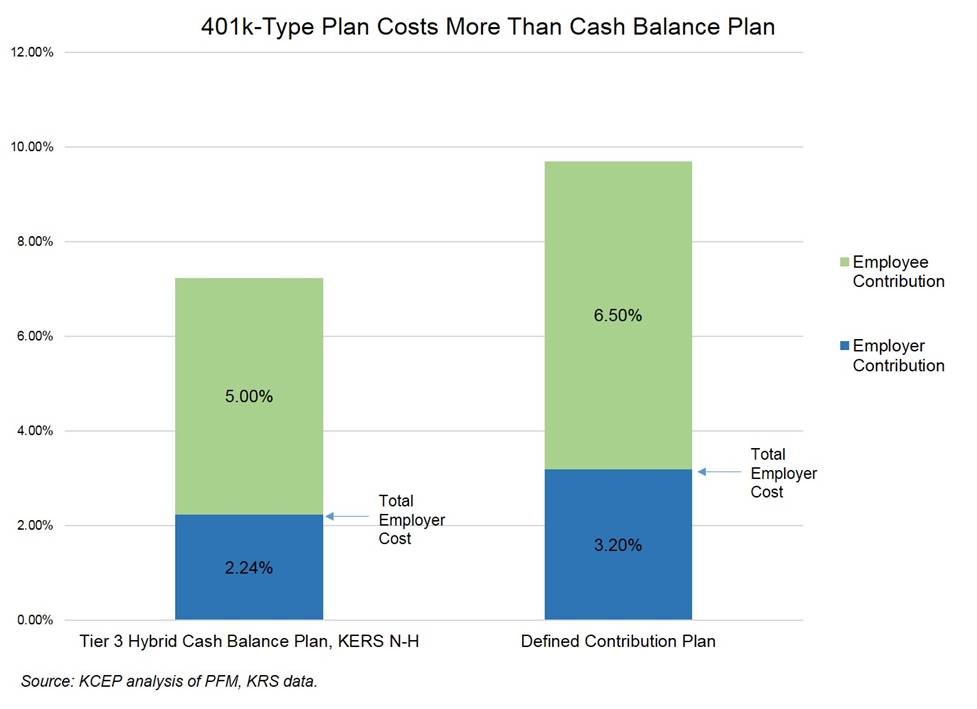 The 401k-type defined contribution (DC) plans proposed by PFM in their final report would cost more than Kentucky’s existing defined benefit (DB) plans, according to data from PFM itself and the systems’ actuaries. Under a switch, the state would be making bigger contributions for a plan that reduces the retirement security of its workers. That hardly makes it a solution to the state’s pension funding challenges.

The cost of the DC plan is higher in part because the existing pension plan for new employees is already inexpensive if funded on time.

PFM’s proposed DC plan would require employees to make a minimum three percent contribution to their accounts and employers to make a minimum two percent contribution. The employer would then be required to match 50 percent of employee contributions up to an additional 6 percent, and there would be vesting requirements for employees to access what employers contribute. For workers in the Kentucky Employees Retirement System (KERS) and County Employees Retirement System (CERS) non-hazardous plans (along with the judicial and legislative systems), PFM projects the average employee will put in 6.5 percent of salary in total with a net employer contribution of 3.2 percent.

The DC plan would replace the existing hybrid cash balance plan for new employees in those systems, which the state put in place in 2013 (and is known as Tier 3). However, the cost for employers of the cash balance plan is very low already. The price tag for a pension plan is known as the normal cost, which is what actuaries say must be contributed each year so enough money is in the systems to pay workers’ benefits when they reach retirement (the other part of pension costs are catch-up payments when past contributions are not made and/or assumptions not met).

For workers in the KERS non-hazardous plan, the employers’ normal cost is only 2.24 percent of a worker’s pay, according to Kentucky Retirement Systems (KRS), with employees contributing 5 percent (employers’ normal cost is 1.27 percent of pay for CERS non-hazardous). That number is lower than the 3.2 percent employer contribution described above for the proposed DC plan, as shown in the graph below.

PFM’s plan would also put new teachers in a DC plan, which would necessitate moving them into Social Security (that’s because their DB plan is a Social Security replacement plan but a 401k-type plan is not). The employee and employer cost for the DC plan is similar to the cost for other state employees, but both employers and employees would also each need to make the required 6.2 percent contribution to Social Security. However, Social Security in itself is more expensive than the employer normal cost of the existing DB plan for teachers, which is estimated at 5.84 percent of pay, and the total cost of the new plan is much higher, as shown in the graph below. PFM admits to this additional cost in their report, but says already-strapped school districts rather than the state could pick up the cost of Social Security contributions. 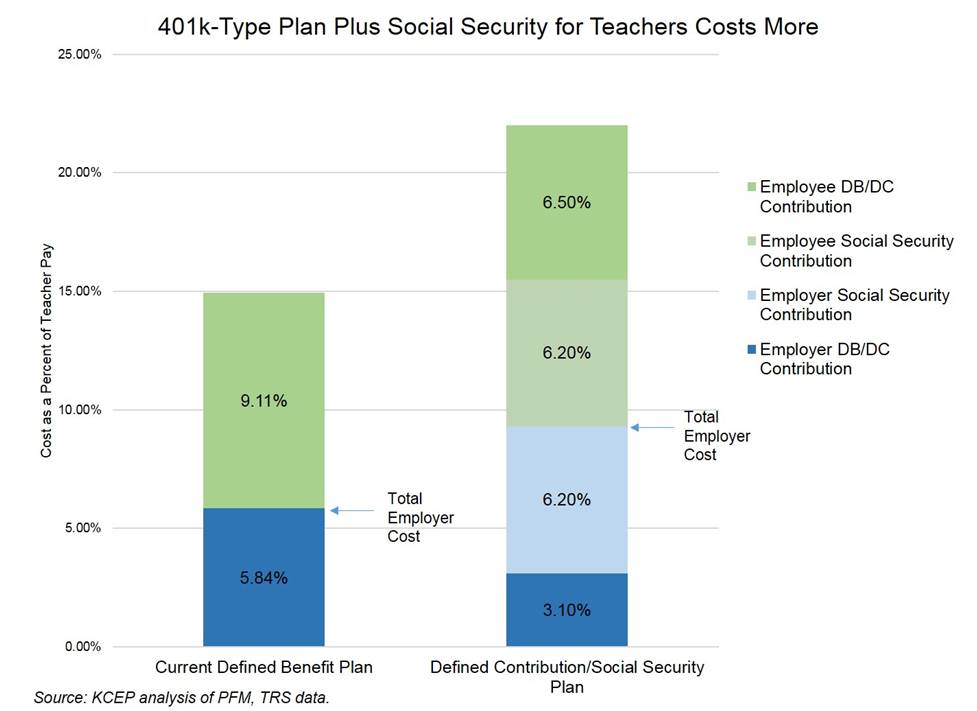 In both cases, then, moving to a 401k plan would increase costs to fund retirement benefits for new employees rather than reducing them. And of course any change for new employees does nothing to reduce Kentucky’s substantial unfunded liability from the past, which is the major challenge the state faces.

But the added cost of switching to 401ks is even higher than that, because a switch involves closing the existing defined benefit plans to new entrants. As we note in our recent report, that will make it more expensive to pay off the closed plan’s liabilities over the coming decades. The added cost comes from the closed plan no longer being balanced by workers of different ages, which means it must take on a more conservative investment portfolio that will earn lower returns. Studies from 14 states have shown that closing a plan makes it more expensive to pay off legacy debts.

What’s more, these added costs would result in substantially lower retirement benefits for employees. As the graph below shows and as we describe here, it costs 42 to 93 percent more to provide the same benefit through a DC plan that an employee receives through a DB plan. DC plans are inefficient, earning lower investment returns and, unlike DB plans, not allowing workers the protection of insuring against each other about how long they will live. 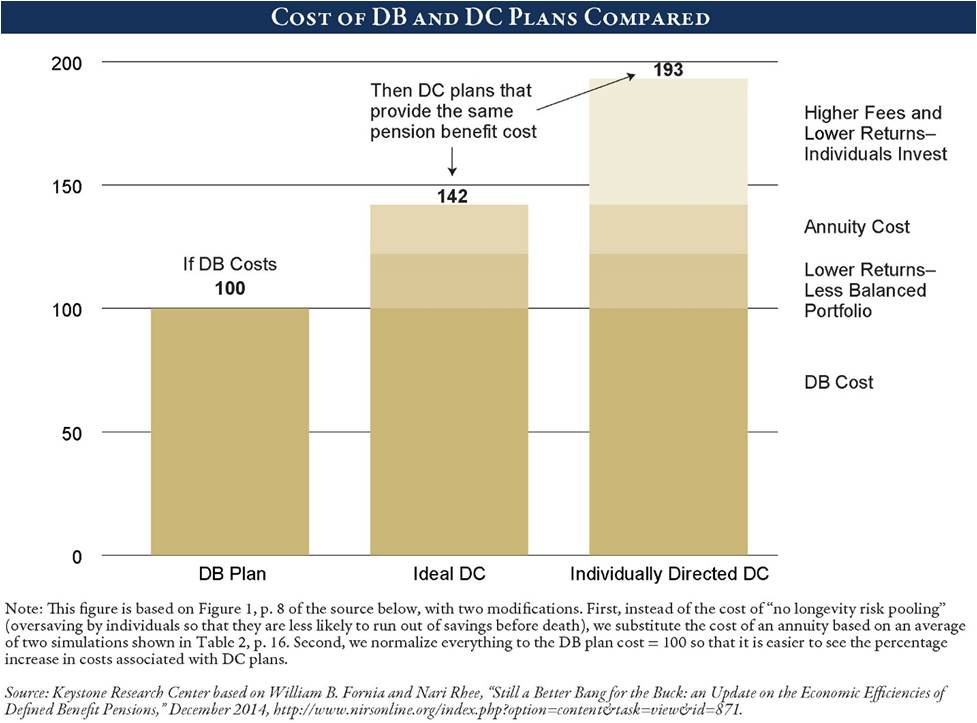 Kentucky needs ideas that work to reduce its unfunded pension liabilities. Moving employees into 401k-type DC plans is actually more expensive, increases the cost of paying off existing liabilities and harms retirees while making it much more difficult to attract and retain a skilled workforce.