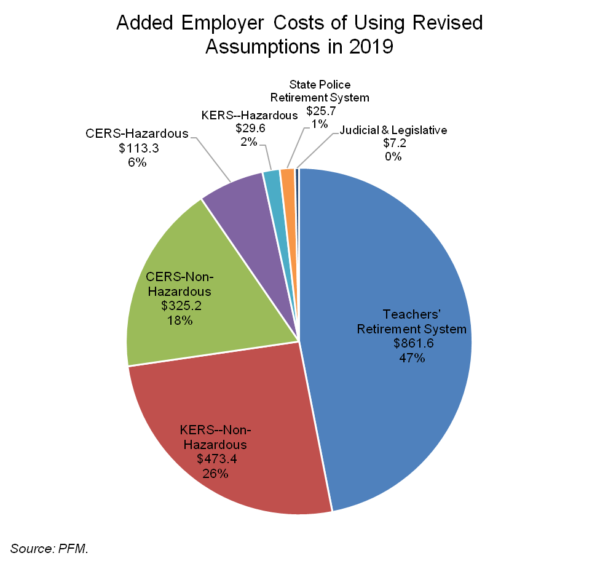 PFM bases its recommendations on claims that existing actuarial assumptions must be altered immediately and dramatically for all of the state’s pension plans. Those changes add $1.8 billion to employer contributions in 2019 above what they would otherwise be.  But while the depleted state of the Kentucky Employees Retirement System (KERS) non-hazardous plan merits additional contributions beyond what its prior assumptions required, PFM applies very conservative assumptions to all of the state’s plans to get to that number — even those plans that are in much better condition.

For example, PFM recommends lower investment return assumptions and a so-called “level dollar” approach to paying down liabilities for the Teachers’ Retirement System (TRS), even though unlike KERS non-hazardous, TRS is 55 percent funded with $17 billion in assets and a payroll that is growing. That change to TRS makes up 47 percent, or $862 million, of the $1.8 billion in added cost PFM claims is necessary, as the graph below shows.

The level dollar approach says the state should be contributing the same dollar amount to TRS now that it will 30 years from now, even though inflation, the economy and population will continue growing between now and then (the latter is why most all pension systems use a level percent of pay method, which allocates costs more evenly as a share of expenses, rather than a level dollar approach that requires sharply higher up-front payments).

Overstated claims from PFM about what must be contributed set the stage for major benefit reductions. Here are some of the ways PFM’s proposals would harm different groups of workers.

PFM recommends clawing back cost of living adjustments (COLAs) given to retirees in all of the plans (including state and local workers, teachers and police) between the years 1996 and 2012. The consultant states that members “who retired in 2001 or prior could have their benefit rolled back 25 percent or more if past COLAs were completely eliminated from prospective benefit payments for retirees.” This cut is one of the report’s biggest, and would severely reduce the quality of life for many retirees — especially those who are older.

Also, PFM would end future pension benefit COLAs for retired teachers (including current teachers after they retire) until the plan is 90 percent funded (which would be far in the future — PFM projects the TRS plan will be 84 percent funded in 2034.) Teachers currently receive a COLA of just 1.5 percent, in part because they do not participate in Social Security, which has COLAs. Kentucky retired teachers would be among the few Americans without a defined benefit plan that adjusts for the cost of living.

The report calls for freezing current workers’ pension benefits and moving them to inferior 401k-type defined contribution (DC) plans for the remainder of their careers. PFM also proposes a buyout to encourage moving workers fully to DC plans. Employees in the KRS cash balance plan created in 2013 would have their credits in this hybrid plan transferred to DC account balances.

PFM would move the goalposts for current workers to receive what remains of their defined benefit plans by raising the retirement age for unreduced benefits to age 65 for non-hazardous workers and teachers and to 60 for hazardous duty employees like firefighters and police officers. The state’s consultant would also eliminate provisions for current teachers including use of sick time towards service credit, a higher factor to calculate benefits for those with over 30 years of service and a method of using the highest 3 years of salary for those over age 55 with 27 years of service.

Cuts to current workers raise serious questions about legality, as they do for retirees, and big problems with how current workers will respond, including the threat that many will choose to retire before changes go into effect — causing a drain on the retirement systems and a workforce crisis for the state and school systems.

For new employees, PFM would move everyone into inefficient 401k-type DC plans. As we show in our recent report, such a move will dramatically reduce the benefits new workers receive for a cost that is comparable to the existing defined benefit plans. Workers in DC plans receive benefits 30 to 48 percent smaller for the same upfront cost.

PFM even recommends moving new teachers into DC plans and Social Security. That will increase costs for employers, as PFM itself admits on page 16 of its report. The current employer cost of the pension plan for teachers is 5.84 percent of pay. Social Security will cost 6.2 percent of pay, on top of which employers will make a match to a DC account of up to 5 percent of pay under PFM’s proposal. So for more employer cost, teachers will get a much smaller benefit. PFM justifies this in part by saying school boards should pick up the cost of Social Security, not the state, continuing the trend of shifting the cost of education from the state to the local level.

In making these changes, PFM ignores the added costs associated with closing the existing plans and moving to 401ks. Closed plans are no longer balanced by workers of different ages, forcing plans to take on more conservative investment portfolios. That will lower rates of return, making it more expensive to pay down existing liabilities over the coming decades. As we review here, 14 states have considered such a switch and found that closing plans and moving to 401k-type DC plans increase the costs of paying down legacy debts.

As a whole, PFM’s recommendations are a drastic and one-sided approach to addressing the state’s pension liabilities. They put the blame and responsibility entirely on retirees, current employees and future workers. Nowhere in the report does PFM look at revenue options that would help Kentucky pay down its liabilities over time while protecting the remainder of our budget and safeguarding our ability to attract a skilled workforce.