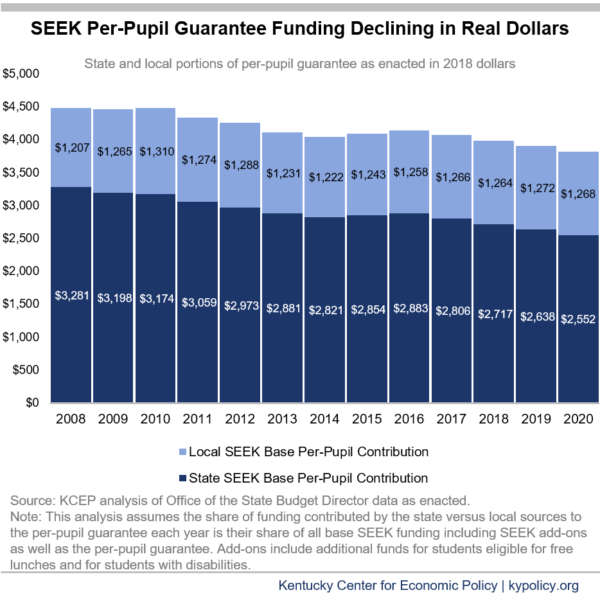 Back to school is an exciting time for Kentucky kids and families. It’s also a time to be aware of how cuts to state funding for P-12 education are holding back kids and classrooms. Whether we begin to reverse a decade of cuts or worsen the trends will be a focus of the legislative session starting in January 2020, when decision makers will create the state budget for the next two years.

P-12 funding has been cut at historic levels

We have heard some legislators describe Kentucky’s current education funding levels as historically high. But what is actually historic is the depth of state funding cuts.

Some point to a portion of core school funding called the SEEK per-pupil “base guarantee” as being higher than ever at $4,000 in the current budget (up from $3,822 in 2008). However, the base guarantee is made up of both state and local funds. The state portion actually decreases each year of the current budget and has declined by $122 between 2008 and 2020, while the local portion grew by $300. The reality is even worse, because these numbers don’t account for inflation – for the fact that $4,000 buys less today than it did in 2008. When inflation is factored in, as shown in the graph below, the per-pupil guarantee is lower in 2020 than it was in 2008 by $667 per student, a decline of 22 percent.

At the same time, key non-SEEK programs such as textbooks/instructional materials, staff professional development and Extended School Services (i.e., after school programs) have also been cut significantly, as shown in the table below. And while some additional funding was provided in the 2018-2020 budget for Family Resources and Youth Services Centers (FRYSCs) — which work to minimize the impacts of hunger and poverty on student learning — once inflation is taken into account, FRYSC funding has been reduced as well.

Preschool was also cut by 6.25% in the 2018-2020 budget. And with the state paying for just half-day preschool programs, only 40% of districts have been able to stretch their local dollars to provide full-day programs, despite it being shown to be more effective for learning.

The 2018-2020 state budget also continued its underfunding of school transportation. Based on estimates of transportation costs and the number of students, the budget funded transportation at 60% of costs — even though statute requires the state to fund it at 100%. With fewer students than expected, an additional $31 million of per-student SEEK funds were shifted to transportation resulting in a 66% funding level in 2019, as shown in the graph below. 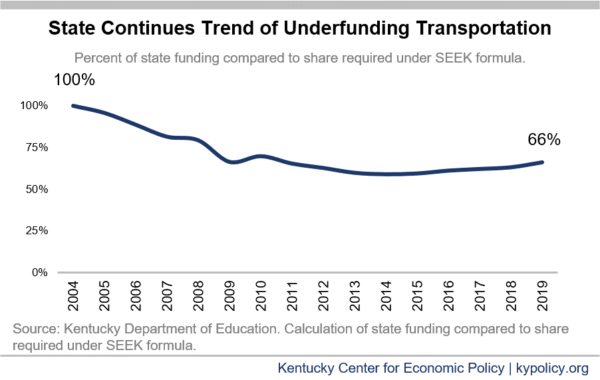 Kentucky’s education cuts are some of the worst in the nation. According to a recent report by the Center on Budget and Policy Priorities, in 2019 school “formula funding” in Kentucky (the SEEK formula or “Support Education Excellence in Kentucky”) ranked 4th worst among states for per-student funding cuts — a 13 percent drop since 2008 in inflation-adjusted terms.

Funding cuts are harmful to kids and classrooms

School funding matters — making a difference today to kids and their classrooms and in the long term for health and economic wellbeing in our state. Research utilizing up-to-date methodologies shows that school funding adequacy impacts student academic and economic success down the road — and greater investments in education can lead to a healthier state.

But when state funding for P-12 education is cut and transportation is underfunded, school districts must make up the difference and/or cut critical programs and services. KCEP’s survey of the impact of funding cuts between 2008 and 2017 on school districts showed that many districts had to reduce course offerings, school-based services, the number of staff, the number of instructional days and more. Some districts have pushed more costs onto parents through instructional and extracurricular fees – a form of school funding that disadvantages poorer districts and families. You can read what districts described as the greatest impact of cuts here.

Wealthier school districts are more able to make up for state education funding cuts than poorer districts, which leads to growing funding inequities between parts of the state. In fact, this year on the 30th anniversary of the Kentucky Education Reform Act (KERA), we are close to pre-KERA levels of inequity. 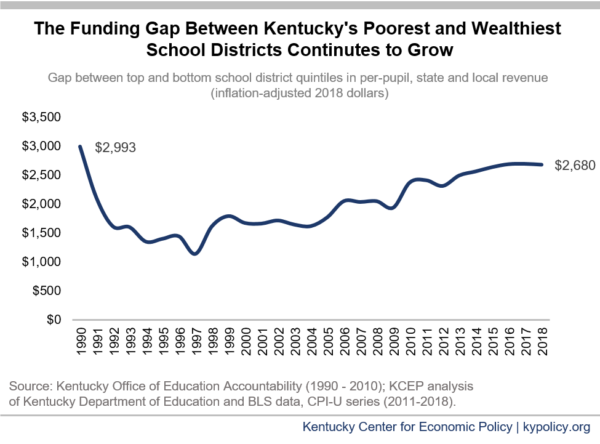 Crafting a better state budget in 2020 – or even one that simply maintains the current levels of underfunding – will be difficult. Despite closing out fiscal year 2019 with a surplus, revenue expectations moving forward are not strong. Legislators made the situation worse in the 2019 General Assembly by passing significant tax cuts, including a $56 million break for banks.