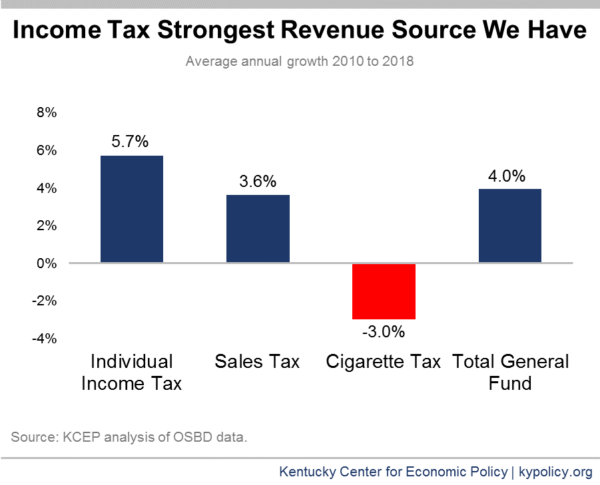 Kentucky ended the 2019 fiscal year with $194.5 million more in the General Fund than was expected based on the revenue estimate – a 1.7% increase compared to the official projection. Receipts above anticipated amounts included one-time monies, increased revenue from a 2018 cigarette tax increase and extra funds from a Supreme Court case that boosted sales tax revenues. Results also point to the worrisome shift away from our strongest source of revenue growth due to income tax changes in the 2018 session.

Total General Fund receipts were $11.4 billion, a 5.1% increase from fiscal year 2018. The two largest sources of unanticipated receipts were the “other” revenue category, which generated $68.4 million more than the revenue estimate, and the cigarette tax, which generated $36.8 million more. According to the State Budget Director, revenue in this latter category came primarily from the sale of abandoned securities – the proceeds from which are held in trust by the Commonwealth in the event the rightful owner claims the property.

A few of the smaller taxes showed year over year growth in receipts. The coal severance tax, rather than declining as predicted, was slightly higher than in 2018. Pari-mutuel taxes, although a small source of General Fund revenues, were up almost 85% year over year, due primarily to additional instant racing machines coming on-line.

Although it is always good to end the year with more revenues than expected, it is important to keep in mind that the largest contributor was the one-time sale of abandoned securities. Furthermore, having cigarette tax receipts come in higher than expected means that the 50 cent cigarette tax increase in the 2018 session didn’t reduce consumption as much as expected, running counter to the health goals of many advocates. Still, cigarette tax receipts are expected to diminish over time, and will not provide the kind of revenue growth Kentucky can rely on for its budget.

Cigarette and “other” receipts together comprised 54% of the total unanticipated revenue – concerning from a revenue sustainability standpoint.

Meanwhile, due in part to the federal “Wayfair” decision allowing states to collect taxes on out-of-state retailers, the sales tax came in 0.8% over the official estimate. Combined with the addition of services to the sales tax in 2018, the tax contributed $3.9 billion to the General Fund in FY 2019, and grew from 34% of General Fund tax receipts to 36% between 2018 and 2019.

This significant shift from relying on the individual income tax to relying on consumption taxes like the sales tax and cigarette tax does not bode well for the future of our General Fund, as the income tax has been our strongest revenue source based on growth, as illustrated below.

What to expect going forward

Over the next few weeks, the state will close the books on 2019 and we will have a better idea of where we stand financially once additional expenditures are subtracted from the $194.5 million in unanticipated revenues. The surplus expenditure plan included in the 2018 budget requires that necessary government expenses (NGEs) like funding for disaster cleanup and jail costs be paid first, then up to $70 million be applied to the medical insurance fund in the Teacher’s Retirement System, with the remainder applied to the unfunded pension liability of the Kentucky Employees Retirement System nonhazardous pension fund. It is anticipated that NGEs will be less than they have been in the past because appropriations were made for some expenses that have been handled historically as NGEs.

As we head into the 2020 budget session, tax changes from the past couple years will come into play again. Following the 2018 legislative session, the Office of State Budget Director informed the Consensus Forecasting Group, which certifies the revenue estimates for the state, that revenue estimating will be difficult for the next several years because of the significant changes to Kentucky’s tax base, especially the sales and use tax. Additional tax changes were made during the 2019 session, making this issue potentially worse for the next few years. We do know that a large tax reduction for banks enacted during the 2019 session is expected to reduce General Fund revenues by another $50 million in 2020.

And if the General Assembly in 2020 enacts a further shift from income to consumption taxes, revenue growth going forward will be even dimmer. A large body of research fails to find any link between economic growth and moving away from income taxes paid more by the wealthy and corporations. Rather, such a shift means slower revenue growth that will hurt our ability to invest in schools, health and other building blocks of thriving communities.