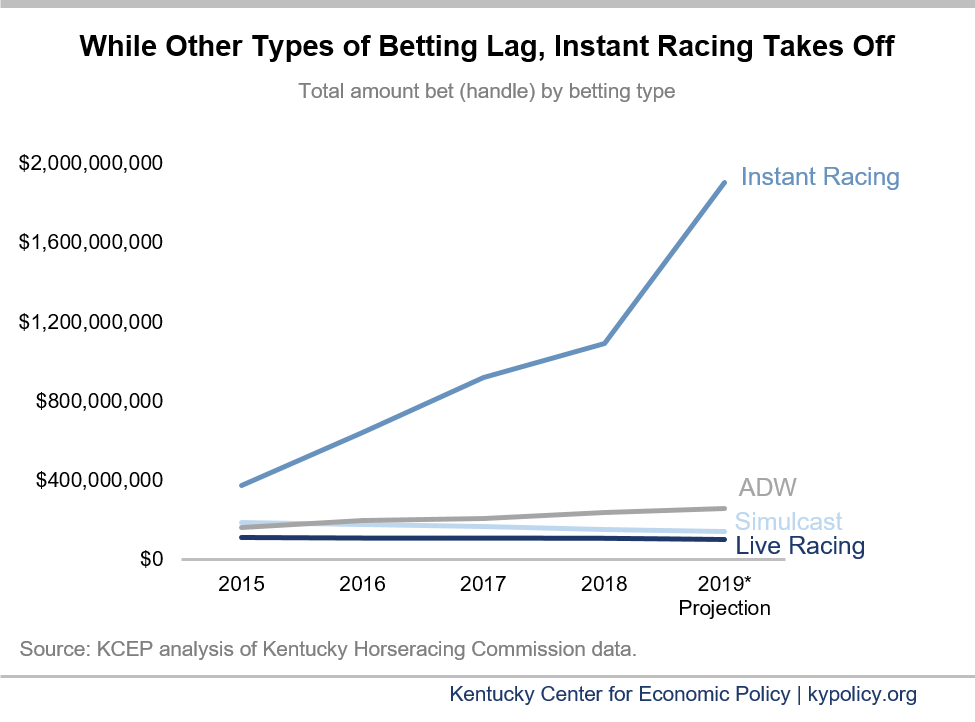 The 145th running of the Kentucky Derby was over quickly, but the revenue losses from Kentucky’s failure to uniformly tax betting already happening in the state — and to dedicate this money to meeting our General Fund needs — continues to be felt. Bringing these taxes into uniformity could generate in excess of $40 million for public investments in the commonwealth, and the amount is expected to grow.

Undertaxed forms of wagering comprise a growing share of bets

In recent years, there has been a dramatic shift in betting and wagering in Kentucky. Where betting on live races at the track or at simulcast facilities were previously the primary ways of wagering, now by far the largest growth in betting is from instant wagering machines, which are more like slot machines. All growth in betting on live racing in Kentucky is through advanced deposit wagering (ADW), where bets are made on races anywhere in the world.

Despite this growth, instant racing is taxed at just 1.5% of the average daily handle (the amount bet) compared to a rate of 3.5% imposed against betting at larger tracks; wagers made through ADW are taxed at just 0.5% of average daily handle, while comparable telephone account wagers or wagers at simulcast facilities are taxed at 3%. In other words, lower rates on forms of betting that are increasing in popularity create a growing missed opportunity to generate revenue for investments in education, infrastructure and other areas of the state budget.

Unlike most taxes collected by the commonwealth that flow to our General Fund, just a third of the revenues raised through wagering taxes are deposited in the General Fund. As the graph below shows, the remaining two thirds are distributed back to the horse industry through different funds and programs, including development funds for the various breeds, a backside improvement fund that tracks can access, and support for horse industry-related higher education. In fact, a full 85% of the taxes collected from ADW goes back to the industry, while only 15% goes to the General Fund. As new forms of betting continue to grow in Kentucky, the amount of resources the General Fund is missing out on is rising.

Growth in instant racing and ADW will likely continue

Instant racing machines can only be located at horse tracks or at facilities owned by horse tracks. The system that determines when bettors win is loosely based on previously run horse races, but otherwise has nothing to do with live betting or horse racing. The number of instant-racing machines operating in Kentucky has exploded in recent years: they were first installed at Kentucky Downs in 2011, at Ellis Park in 2012 and at the Red Mile at facility jointly operated by The Red Mile and Keeneland in 2015. Then in fall of 2018, Derby City, owned by Churchill Downs, opened in Louisville with 900 instant racing machines; and Derby City has been approved to add 100 more machines. Also in the fall of 2018, Churchill Downs and Keeneland received approval to build an instant racing facility – Oak Grove Racing & Gaming in Christian County – that will include a standardbred track, hotel, equestrian center and up to 1,500 instant racing machines.

As more machines have been added, the amount bet using them has increased substantially; with continued expansion, these revenues will only increase more in the future. The amount bet through instant racing machines has grown from $373 million in 2015 to over $1 billion in 2018.  At the end of March 2019, the total amount bet in the first 8 months of the current fiscal year exceeded $1.3 billion, reflecting growth of 74% year over year for the same period.

Even though the industry is moving ahead aggressively with the construction of new facilities and the installation of more machines, legal controversy remains over whether the instant racing machines are in fact pari-mutuel wagering, where bettors bet against each other rather than betting against the house. This question matters because pari-mutuel wagering is the only form of wagering that is legal in Kentucky. In the most recent court decision issued in March of 2019, the court found that the machines are based on pari-mutuel wagering and are therefore legal. The decision has been appealed.

When it comes to live races, betting at the track and through simulcast facilities has declined slightly over the past five years, while betting using advanced deposit wagering (ADW) has grown. ADW allows bettors to establish accounts that they can use to bet on horse races anywhere in the world, from any electronic device. With special perks and incentives, bettors are encouraged to use ADW even when they’re at the track and could place a bet at the window. This shift away from traditional betting to ADW is expected to continue in the future.

Based on the latest information available, the amount bet through ADW has increased by 9.5% and the amount bet through instant wagering machines has increased by 74% compared to the same period last year. Increasing the rates as proposed, with new revenues going to the General Fund, would have meant an estimated $42 million for the full fiscal year. The amount will grow as more instant wagering machines are installed and as bettors continue to shift from live betting at the track and simulcast wagering to using ADW.

Under the proposal described above, the horse industry will continue to benefit from the base increases caused by the growth in instant racing in the future. At the same time, all forms of betting will be taxed at comparable rates, and the people of the commonwealth will benefit from increased revenues for the General Fund.