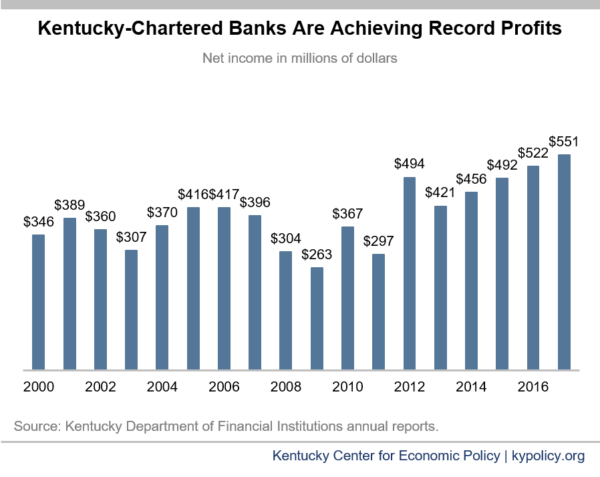 One of the surprise provisions included in HB 354 – the tax clean-up bill that morphed into a tax giveaway bill – is a $56 million tax cut for banks. These new tax breaks accelerate a race to the bottom – a slow death by a thousand cuts over the last two decades that has reduced Kentucky’s General Fund resources to the point that we can no longer make the investments needed for our communities to thrive.

Contrary to claims made by lobbyists, this tax cut was not targeted solely to community banks. All banks doing business in Kentucky regardless of size or where the bank is chartered pay the bank franchise tax, which means that all banks stand to receive a windfall from the tax cut. Approximately half of bank deposits in Kentucky are held by out-of-state or federally chartered banks, according to FDIC data, and the five banks with the greatest share of deposits in the state are not Kentucky-chartered. For multi-state banks, the franchise tax applies based on their property, payroll and sales in Kentucky, and out-of-state banks have over 800 branches across Kentucky.

These new tax breaks were first introduced during a free conference committee, with no public hearings or discussions about the potential impacts of the legislation, and therefore no opportunities for anyone other than the bankers and their lobbyists to be heard. Because of the significant fiscal impact, the effective date for the tax cut has been pushed out until 2020. Revenues in the current biennium, which are already expected to be lower than projected, will not be impacted. However, the cost of these new tax cuts will have to be accounted for during the next budget cycle, further compromising our ability to make needed investments in education, human resources, and public safety and making the difficult budget situation even worse.

These tax cuts come at a time when banks are doing very well financially. Contrary to the picture painted by the banks and their lobbyists, the sky is not falling. In fact, banks doing business in Kentucky are healthy, are achieving record profits (as shown in the graph below) and expect a good year in 2019. New banking offices are being established, and banks chartered out of state are locating new branches in state regardless of our current tax structure. The Department of Financial Institutions (DFI) Annual Report for 2017 notes that “capital levels of state-chartered banks continue to exceed the national average … and remained the highest of surrounding states.”

Banks are also among the biggest beneficiaries of federal tax cuts in late 2017. The FDIC reported last month that community banks reported net income of $6.8 billion in the fourth quarter, up $2.7 billion (65.1 percent) from a year ago. Without the benefits of the tax cut, estimated fourth quarter net income would have increased by 11.2 percent from a year ago – illustrating the significant impact of the huge federal tax break on community bank profits.

One of the primary justifications offered by banks and their lobbyists in support of the tax cut is that tax relief is needed to prevent the loss of additional state-chartered banks through mergers and acquisitions with out-of-state banks. In reality, the acceleration of mergers and acquisitions in Kentucky has been occurring all across the country for decades and relates to the passage of the Riegle-Neal Act of 1994, which allowed banks to set up new branches across state borders without having to acquire a subsidiary bank. And the trend is expected to grow over the next few years, in part because of significant changes to federal laws in 2018 that substantially reduced the compliance costs for community banks and allowed greater use of debt to finance acquisitions.

Banks argued for the tax cut in part by noting that the Kentucky corporate income tax rate of five percent is in effect lower than their bank franchise tax. However, it is lower in comparison only because the General Assembly has cut it; when the state bank franchise tax was enacted in the 1990s, the top rate on the corporate income tax was 8.25 percent, and it had been raised in 1990 to help pay for improvements in schools through the Kentucky Education Reform Act (KERA). The downward trend of corporate tax cuts, now extended to banks, is directly related to our failure to invest adequately since KERA in our schools.

Tax cuts that increase special interests’ profit margins often fail to stimulate new economic activity, even as they cost us resources that would otherwise go to the most important investments we can make in our state like education and infrastructure. Given the overall financial health of the banking industry – including the significant breaks the industry received from the federal tax cuts as well as the benefits that smaller banks received from changes in the Dodd Frank Act in 2018 – there is no reason for the Kentucky General Assembly to have provided such huge tax breaks for banks this session. Kentucky’s lack of resources has forced round after round of budget cuts to the point that there isn’t enough money to pay for textbooks for kids or professional development for teachers. Prioritizing cuts for banks makes it even harder, now and going forward, to invest in the building blocks of a thriving economy.