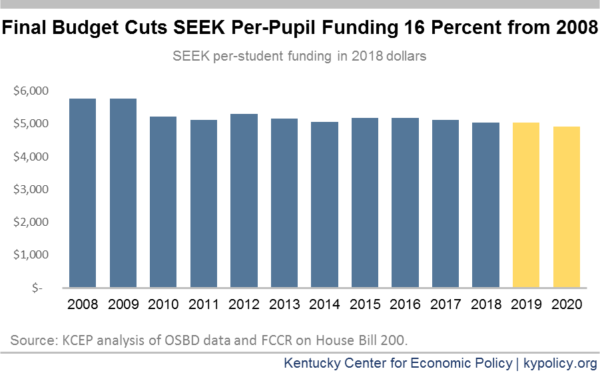 House Bill 205 proposes an expensive new tax break for private schools even though the current budget makes yet another round of cuts to K-12 public schools. The proposed subsidy will take additional resources from an already strained budget and worsen funding problems related to adequacy and equity in our public school system.

The 2018-2020 budget enacted last spring included more cuts to school funding. State money for Support Education Excellence in Kentucky (SEEK) base funding, the core dollars for schools and the biggest education expenditure, increase only 0.1 percent in 2019 and decline by 0.6 percent in 2020. On top of past cuts, total per pupil SEEK funding adjusted for inflation will be 16 percent below where it was in 2008.

Among the inadequacies in the SEEK budget is funding for student transportation, which by law is a state responsibility. A rising share of transportation costs have actually been paid by local school districts over the last decade. Currently the state only provides 59 percent of the cost of transporting Kentucky kids to and from school.

The budget added extra funding in a few areas, like Family Resource and Youth Service Centers and the Safe Schools program. But it completely eliminated funding for textbooks, teacher professional development and other areas like the Kentucky Teacher Internship Program. It cut funding for preschool and Extended School Services like afterschool programs by 6.25 percent. Those cuts put Extended School Services funding at 39 percent less than 2008 levels after accounting for inflation.

K-12 cuts are among the worst in the country

Kentucky’s public school cuts stand out, with the commonwealth ranking 3rd-worst among all states in cuts to core funding over the last decade, according to a report by the Center on Budget and Policy Priorities. Most states are now reinvesting in K-12 education, but Kentucky is one of just seven states continuing to make cuts to core funding. 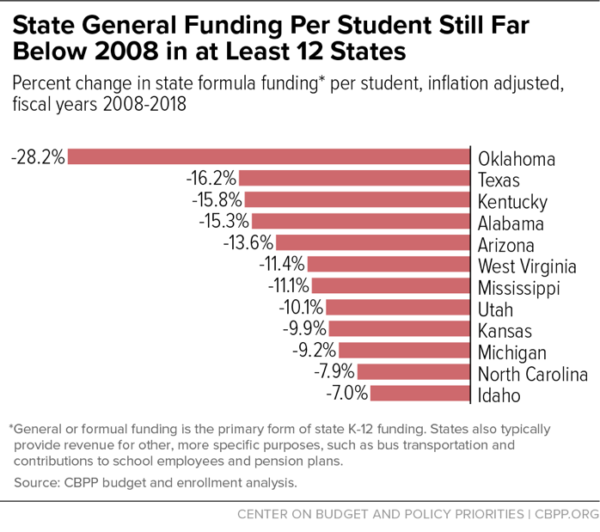 The state’s school funding reductions are compromising the ability of the General Assembly to meet its constitutional obligation of providing an adequate and equitable education to every student. One way that underfunding plays out is in the growing gap in funding per student between rich and poor school districts, which the SEEK formula was created to address — if properly funded. Beginning in 1990 with the Kentucky Education Reform Act (KERA), substantial additional funds were invested in education, reducing the gap between rich and poor districts. Since then, state cuts have resulted in the inequities between districts rising again, to the point of almost returning to pre-KERA levels of inequity by 2017. 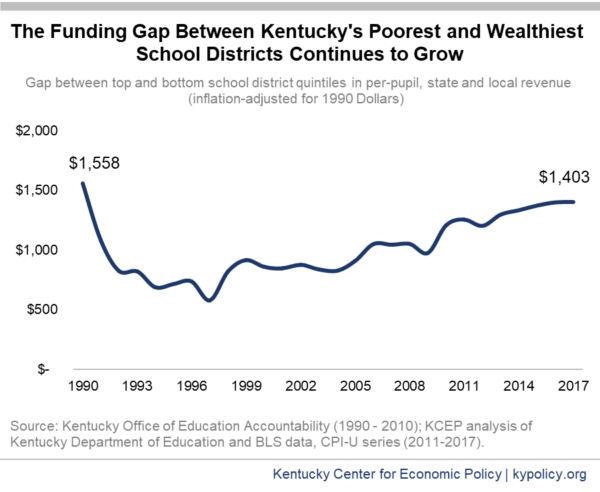 Cuts can also result in districts being unable to provide services shown to make a real difference for students facing barriers to success, including low-income students, students of color and children with special needs. In KCEP’s survey, local school leaders identified the need for extra supports for kids with adverse childhood experiences like poverty, homelessness and violence. But 42 percent of districts reported having to cut back on related supports like after school, summer school and intervention/enrichment services. A quarter of districts also reported spending less on health services, and 14 percent spent less on special education under the pressure of reduced state funding.

The proposed new tax breaks for private schools are not free; in fact, they are set up so that the costs will escalate, becoming even more expensive in future years. In addition to less state General Fund revenue because of the tax expenditure, schools that lose students will receive less state education dollars, which are allocated to districts on a per pupil basis. Because fixed and other costs cannot be reduced on a student-by-student basis, schools will not be able to save money proportionate to the students who leave for private schools.

Kentucky should redouble its commitment to the existing public system, not create another hole in the school funding bucket and a new tax expenditure reducing general fund revenues for the benefit of a separate and unaccountable private school system.