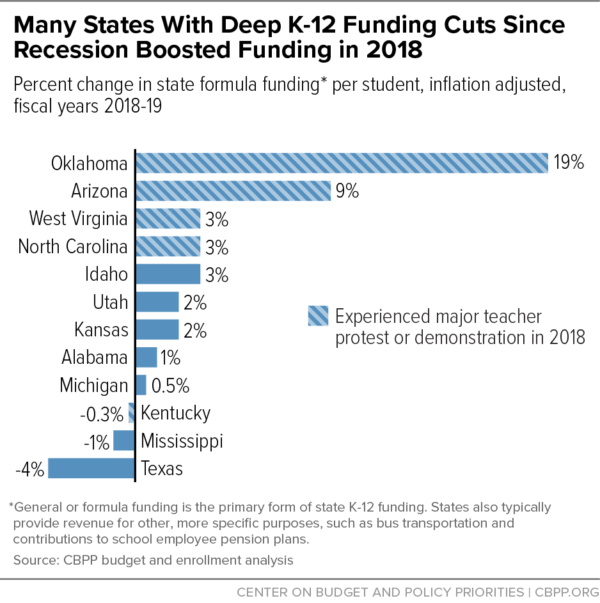 School “formula” funding in Kentucky continues to fall far below its pre-recession level, according to a new report from the Center on Budget and Policy Priorities (CBPP). This funding, which in Kentucky is the SEEK (Support Education Excellence in Kentucky) formula, is now 13 percent less per student in 2019 than in 2008, after adjusting for inflation. Kentucky ranks 4th worst in the nation for these cuts.

The report shows that while many states with deep K-12 funding cuts since the recession boosted funding last year, Kentucky did not. Kentucky is the only state among the five that had teacher protests last year that saw a decrease in inflation-adjusted formula funding.

“The formula works well to promote equity in allocations when it is itself adequately funded at the outset,” said Kerri Schelling, Executive Director of the Kentucky School Boards Association. “We know that when the total amount of funding allocated through the formula is held steady or reduced, we lose purchasing power due to inflation and we also exacerbate inequities among communities. That’s always a fundamental concern for parents and local school leaders.”

According to Superintendent Kathy Burkhardt, Erlanger-Elsmere Schools, “With such cuts, districts are continually forced to rely more on local tax payers and to find ways to cover the 2019 rising operational costs while the funding levels are far below those of 2008. This raises questions of our state’s constitutional obligation to provide adequate and equitable funding to public schools.”

“These cuts are hurting classrooms and kids across the state,” said Ashley Spalding, Senior Policy Analyst at the Kentucky Center for Economic Policy. “Schools have had to cut back on art and music, course offerings, student supports and sometimes even special education services. And they’ve reduced staff and have been unable to provide needed raises.”

Making needed investments in education in Kentucky would increase opportunities for low-income students and students of color, who face the greatest barriers to education, and strengthen the economy for everyone.

“Kentucky can make these critical investments by raising new revenues such as by clawing back some of the tax giveaways to the very wealthy and corporations that went into effect last year,” said Spalding of KCEP. “At the same time, the state must not go further in the hole by enacting any of the expensive new special interest tax breaks that are currently in front of the General Assembly.” 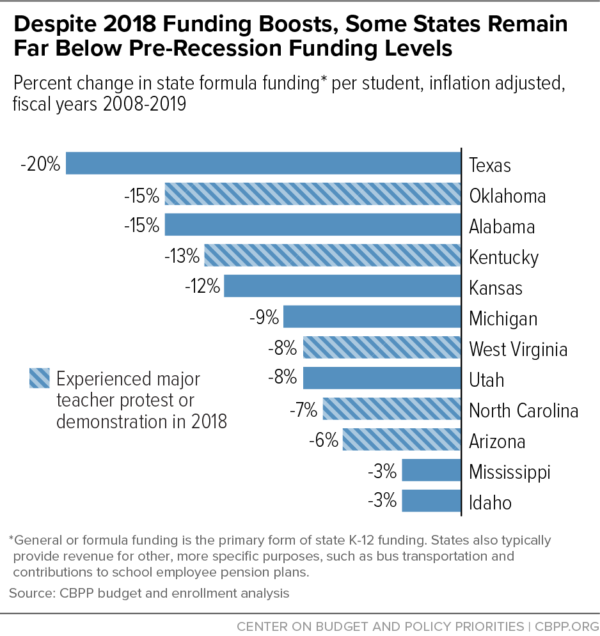