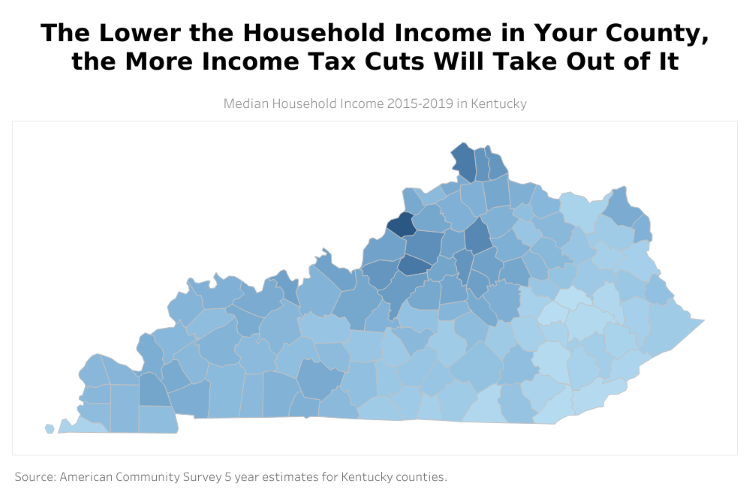 To pay at least in part for income tax cuts for the wealthy, the House budget proposal shorts investments in schools, health, human services and infrastructure. Given historic revenue levels, much more is possible to provide Kentuckians of all races and zip codes with reliable child care, a good education and safe and healthy communities. But cutting income taxes is even worse than a missed opportunity to advance equity and shared prosperity in the current budget; It will actively increase socioeconomic, racial, gender and location-based inequality in Kentucky, taking resources out of communities to concentrate them further among those already at the top, and making life harder for everyone else – especially low-income, rural and Kentuckians of color.

Income tax cuts benefit the wealthy at the expense of others

Income tax cuts deliver the biggest giveaways to high-income people and wealthy communities. Analysis from the Institute on Taxation and Economic Policy (ITEP) shows that an income tax rate cut from 5% to 4% would give a tax cut of $11,056 annually to the top 1% of Kentuckians, who have an average annual income of $1.4 million. The bottom 20% of Kentuckians, whose income is $13,000 on average, would get a tax cut of just $20 dollars a year. At the middle, that cut would amount to just $23 a month.

Raising the sales tax has not been proposed so far, but proposals like HB 8 leave a massive hole in the budget that must be made up somehow, and states without income taxes must regularly increase regressive taxes. Because items subject to the sales tax comprise a larger share of lower-income households’ budgets, this swap is a “regressive” shift in taxation that gives tax cuts to the wealthy and increases taxes on working class families. For instance, to make up for an income tax cut from 5% to 4%, Kentucky would need to raise the sales tax rate to 7.4% – the highest state sales tax in the country. Under this shift, the bottom 60% of Kentuckians get a tax increase, while the top 20%, especially the top 1%, get a tax cut.

Of course, because of existing structures that shape where, and among whom, resources are already concentrated in Kentucky, a tax shift will not only increase inequality between households, but between demographic groups and communities as well. For Black Kentuckians, a history of barriers to economic security stemming from slavery, Jim Crow, incarceration and discrimination have resulted in lower average incomes compared to white Kentuckians. Analysis from ITEP shows that while Black Kentuckians comprise 8% of tax filers, they comprise 12% of filers in the bottom 20% of incomes. Racialized barriers to economic security for Hispanic Kentuckians mean they comprise 3% of all filers, but 5% of filers in the bottom 20%. White Kentuckians, on the other hand, who have historically benefitted from policies with disparate racial impacts, are 86% of all filers but 92% of filers in the top 20%. By increasing taxes for proportionally more people of color, and cutting them for proportionally more white people, a tax shift further widens racial inequity.

Income tax cuts also increase disparities based on where in the state Kentuckians live. The map below shows where median household income is already high and low in Kentucky, and where the impacts of tax giveaways versus regressive tax increases will be felt. For instance, under the tax shift described above, the typical resident of Oldham County, where median household income is $99,128, will see a tax cut. The typical resident of Wolfe County, where the median household income is $24,623, will see their taxes go up substantially as a share of income. Further, 16.5% of Oldham county residents make $200,000 or more annually – meaning they are in the top 5% of Kentucky households by income who will receive the greatest tax cuts under the shift. Meanwhile, a statistically insignificant 0.2% of Wolfe County residents make that much. Unlike wealthy communities where the spoils of income tax cuts would be concentrated, lower-income, often rural communities will pay more.

“Shift and shaft” tax policy increases regressive taxes on low-income households. But it doesn’t stop there. Because income tax cuts are extremely expensive (an income tax cut from 5% to 4% would cost Kentucky $1.1 billion), and because sales taxes don’t grow as well as income taxes over time, income tax cutting and sales tax shifting take resources out of the foundations of economic success like education, health and infrastructure.

As other states’ income tax cutting experiments have shown, the concentrated benefits for millionaires and wealthy communities do not trickle down to people and communities with less resources. In fact, income tax cuts weaken state economies. Kansas, Arizona, North Carolina, Ohio, Maine and Wisconsin have all cut income taxes in recent years, forcing substantial budget cuts that have harmed schools, led to higher college tuition and stifled teacher salaries, and their state economies have grown more slowly than the national average.

Critically, income tax cuts leave less revenue for P-12 education, the largest single expenditure in Kentucky’s budget. State budget cuts have already put more funding responsibility on local districts, but even when they raise taxes year after year, poorer districts can’t keep up with wealthy districts. That’s why, in 2020, we spent nearly $3,000 less per student in poor districts. More income tax cuts will further widen the gap between resources for students in poorer and wealthier parts of the state.

For instance, a KyPolicy analysis of data from the Kentucky Department of Education shows that, on average across the state in 2020, 61% of total state and local education revenue came from the state. In the top 20% of school districts by property wealth, 44% of total state and local funding comes from the state, while the share is a much higher 79% in the poorest 20% of school districts. Taking state income taxes out of the budget and decreasing state funding for education will harm funding less in wealthy districts that don’t rely as heavily on the state and can make up for funding losses with higher local taxes. Income tax cuts will make it that much harder for districts already struggling to give students an equal education.

The disparity-widening impact of income tax cuts becomes even more glaring when looking at the poorest and wealthiest Kentucky communities. Anchorage Independent School District relies on the state for just 31.4% of total state and local funding for education, while Wolfe County School District relies on the state for 88.4%. Yet per-pupil state and local funding in Anchorage is about $9,000 more than in Wolfe County. While delivering huge tax cuts to a disproportionate share of Anchorage residents, shift and shaft tax policy will increase taxation on Wolfe County residents and harm their main, already inadequate source of education funding.

Income tax cuts also leave less revenue to pay teachers, public defenders, social workers and other public employees. According to Census data, women comprise 49.5% of total employment in Kentucky, but 61.5% of public employment. That means tax cuts lead to wage erosion for the public sector and are helping to drive the gender pay gap. Already, the state has allowed state worker pay to decline by 4% on average since 2008, while private sector wages have risen by 13%. For Kentucky teachers, 82% of whom are women, average pay has fallen 8.1% since 2008, with even deeper cuts in some communities.

In addition to widening gender-based pay disparities, that decline in public sector pay has a bigger negative impact in rural communities where the public sector makes up a larger share of the local economy. On average across the state, wages from state employment make up 1.6% of total wages, but in Wolfe County, for instance, wages from the public sector account for 4.8% of total wages. Depriving state workers of raises year after year deprives some local economies of a relatively more critical source of economic activity.

Rising college tuition, child care deserts, and a lack of services and resources for people with disabilities and for seniors are just a few more of the harmful impacts of income tax cuts on Kentucky communities – especially communities that can’t afford private services when the state prioritizes tax cuts for the wealthy over public investments.

Income tax cuts are often framed in terms of makers and takers. Those who would give the ultra-wealthy huge tax cuts label them as the makers in order to justify redistributing even more wealth upwards. But income tax cuts take resources from people and communities working every day in undervalued jobs in the context of deeply entrenched barriers to equality, and give those resources to people for whom the rigged economy is already delivering big dividends.