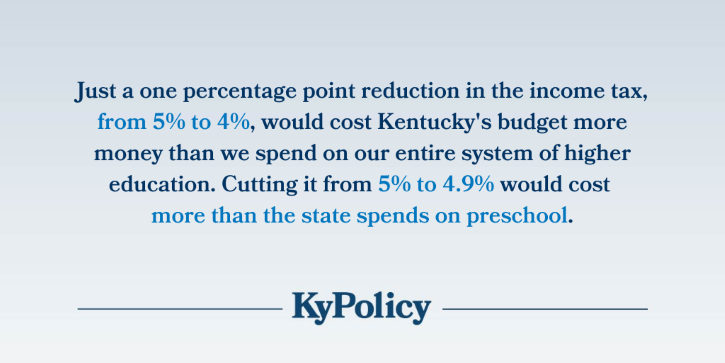 Indications are the 2022 Kentucky General Assembly will consider major changes to the state’s tax system. While big proposals are often labeled as “tax reform,” change itself will not necessarily make things better — and can easily make them much worse.

Around the country, states are taking two distinct paths when it comes to taxes that have profoundly different implications for the well-being of people and communities.

One path makes state economies stronger and quality of life better by strengthening schools, health care and other core public investments. Those states fund improvements by requiring the wealthy to pay their fair share of taxes. States on the other path increase hardship for working families while further enriching the powerful and corporations. Those states cut taxes at the top and shift the losses over to everyone else as investments in education, health care and other core services wane.

Kentucky would be wise to take the first path. While the top 1% are raking in massive wealth and corporate profits are reaching record highs, a dozen states in recent years have enacted higher taxes on millionaires. States like Colorado, Maryland, Washington, Oregon and more are also limiting deductions for high-income households, increasing taxes on capital gains and closing corporate tax loopholes.

Residents of states that took this approach are reaping the benefits: The 9 states with the highest top income tax rates have had faster economic growth over the last decade than the states with no income taxes at all. States that enacted millionaires’ taxes after 2000 had growth that equaled or exceeded nearby states who did not. And one comparison showed that Minnesota outperformed next-door neighbor Wisconsin after the former increased taxes on those at the top while the latter cut them.

When states close loopholes and eliminate tax breaks for the wealthy and well-connected, they are able to put that money into early childhood education, infrastructure, clean air and water and more. That spurs state growth by improving quality of life, fostering innovation, supporting business formation and circulating dollars in local communities.

While the first option is the path to prosperity, there is a real risk the General Assembly may head in the wrong direction.

In the early 2010s, Maine, Ohio, Wisconsin, Kansas and North Carolina made big cuts to individual income taxes with claims their economies would take off. But all 5 states saw slower growth in gross domestic product than the United States as a whole in the years after, and 4 of the 5 states had weaker job growth.

Income tax cuts in Kansas were such a failure that the state famously had to repeal them after 5 years to save its budget-starved schools. Kentucky would likely end up in the same boat if policymakers further cut our income tax. Just a one percentage point reduction, from 5% to 4%, would cost Kentucky’s budget more money than we spend on our entire system of higher education: 8 universities and 16 community colleges. Cutting it from 5% to 4.9% would cost more than the state spends on preschool.

We know we can’t get something for nothing. Schools, roads and other necessities cost money, and if the income tax is cut, that money will have to come from somewhere. That’s why states that cut income and corporate taxes end up raising sales and other consumption taxes. Doing so turns the tax system on its head. Sales taxes take a much bigger share of the incomes of the poor and working class — disproportionately people of color — who must spend all of their incomes on necessities. And it weakens revenue in the long run by relying on people whose incomes are stagnant, while cutting taxes for wealthy people, whose incomes are rigged to grow.

If Kentucky were to cut its income tax rate to 4%, it would have to raise the sales tax rate from 6% to 7.4% to make up the lost revenue, according to the Institute on Taxation and Economic Policy. That would give our state the highest state sales tax in the country. The bottom 60% of Kentuckians would pay more in taxes as a result while the richest 1% — who make $1.4 million a year on average — would be the big winners with a typical annual tax cut of $8,731.

Shift and shaft tax policy works as well as the “trickle-down economics” that underlie it — which is to say, not at all. Kentucky shouldn’t squander its once-in-a-generation surplus and hinder its economy in the future with tax policies that give more of our precious resources to the powerful few.