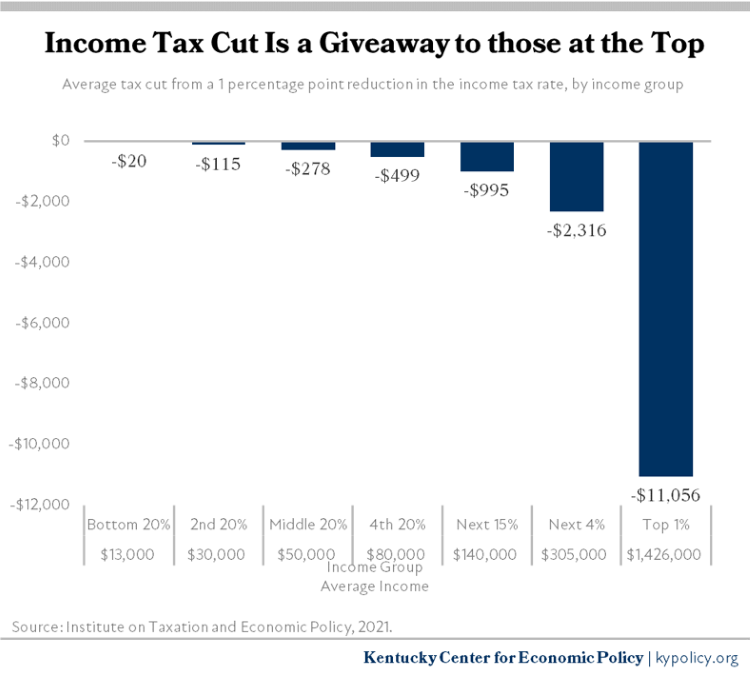 Wealthy interests and corporate lobbyists are ramping up efforts to pass major tax cuts this legislative session that could leave a massive and permanent hole in Kentucky’s budget. The focus is on reductions to Kentucky’s 5% income tax rate.

Proponents are telling an old, discredited story that additional tax cuts will grow the state’s economy. In reality, cuts will be just another giveaway to the wealthy at the expense of everyone else.

Evidence from other states shows that income tax cuts fail to attract people or businesses as promised. They instead weaken economies in two ways. First, they reduce revenues available for foundational investments in schools, health, infrastructure and more that are key to state prosperity. Second, by redistributing wealth upward they take dollars out of the economy that would otherwise flow through local communities.

We can learn valuable lessons from failed tax-cutting experiments in other states. In 2012 Governor Sam Brownback of Kansas promised that income tax cuts would be a “shot of adrenaline into the heart of the Kansas’ economy.” Just five years later, the Kansas legislature had to roll those tax cuts back because economic growth had lagged the national average and tax revenue had plummeted.

And Kansas is far from alone: Other states that made income tax cuts around the same time faced similar woes, including Arizona, North Carolina, Ohio, Maine, and Wisconsin. All have been forced to make substantial budget cuts after they passed income tax reductions — resulting in problems ranging from poorer-funded schools to higher college tuition to low teacher salaries — and have economies that grew slower than the national average after the tax cuts went into effect.

One version of the false narrative about income tax cuts says that individuals will move to Kentucky if we simply lower our income tax rate. Proponents point to higher migration to states like Texas, Florida and Tennessee that lack income taxes, but conveniently ignore other states that also have high rates of in-migration and high income taxes. According to the Census data, 7 of the 10 states with the highest rate of net domestic migration over the last decade have income taxes, most with higher top rates than Kentucky (net migration rank with top income tax rate noted in parentheses):

A cut in the state income tax rate is not enough money to cause individuals to move to Kentucky, as simple math makes clear. Under an income tax rate cut, all but the wealthiest would receive tax cuts that are worth far less than the cost of renting a moving truck, much less all the costs associated with relocating between states. Kentuckians in the bottom 80% of income would receive an average tax cut of $228 for a reduction in the state’s income tax rate to 4%, according to the Institute on Taxation and Economic Policy. The average interstate move, in contrast, costs approximately $4,890, or 21 times that amount. And this comparison doesn’t take into account how costs will go up due to fewer public services or the impact of eventual increases in sales and other taxes to make up for the lost revenue.

Proponents also claim that people are moving to Tennessee rather than Kentucky because the former lacks an income tax. If that were true, we would especially expect to see Kentuckians moving to Tennessee because the two states share a long border and are similar in many other ways. But each year only about 0.2% to 0.4% of the Kentucky population moves to Tennessee and approximately the same share of people move from Tennessee to Kentucky, as shown in the graph below. The numbers of people actually migrating between Kentucky and Tennessee are tiny and nearly offset each other between the two states. So contrary to what proponents are saying, there is no evidence of an exodus to Tennessee.

The reason proponents of income tax cuts have to cherry pick states and make unsubstantiated assertions is there is no evidence to support their claims — but plenty of evidence to refute them. The reality is that migration between states is very small and has actually been declining for decades now, in part because of the aging of the population, higher housing costs in fast-growing metro areas, and changes in work and family structure. The majority of the small share of people who move between states do so because of a new job, job transfer or family reason, or relocate because of housing costs or warmer weather. Careful academic studies have found that state and local taxes do not play a major role in interstate migration.

It’s the same story with businesses. Nearly 90% of states’ job creation comes from start-ups that typically don’t have a profit yet that would be subject to the income tax, and from existing businesses already comfortable operating under a state’s existing tax structure. A U. S. Small Business Administration study found “no evidence of an economically significant effect of state tax [policy] portfolios on entrepreneurial activity.” Surveys find taxes are not a major factor in location decisions, while tax cuts take resources away from investments in education, infrastructure, public health and other essentials for business growth.

Kentucky’s rate of in-migration is about average among states, while our much bigger population concern should be the state’s death rate, for which Kentucky ranks among the worst (as does Tennessee). Kentuckians live 5-6 fewer years on average than the states that top the list of life expectancy (Hawaii, California, New York, Minnesota and Connecticut — all high-income tax states). Along with high rates of cancer, diabetes, heart disease and other killers, Kentucky is among the leading states for “deaths of despair” or fatalities from drugs, alcohol and suicide. To improve Kentuckians’ life in quality and quantity, we should prioritize improving health through greater preventative measures, a stronger focus on public health and expanded access to affordable health care — all of which require tax dollars.

Income tax cuts do not pay off in economic growth in part because they reduce revenue for foundational investments in schools, health, infrastructure and other areas critical to shared prosperity. In Kentucky, 40% of General Fund revenue comes from the income tax. That makes cutting the tax very expensive. Even small cuts in the income tax rate are extraordinarily costly:

In addition to creating a major hole in the budget, cutting the income tax will make public investments harder to afford in the future because the income tax is the state’s most robust long-term revenue source. The income tax is especially productive because it asks more of people at the top whose incomes are growing rapidly while the sales tax (the state’s second-largest source of revenue) relies disproportionately on middle- and low-income people whose incomes are stagnant. The highest-earning 1% of Kentuckians captured 39% of the state’s income growth from 1973 to 2007 and 34.4% from 2009 to 2015.

If you look at the years between 2007 and 2018, a good timeframe to make an apples-to-apples comparison between the individual income tax and the sales tax because no major policy changes were made to either tax, state individual income tax revenue in Kentucky grew by 51% while sales tax revenue grew by only 28%. Shifting away from the income tax will further weaken the pace of revenue growth and hinder our ability to make investments in schools and other areas in the future.

Giving away the $1.1 billion the House budget has set aside in an income tax cut will hand the money disproportionately to the wealthy and corporations who will not reinvest it back into the Kentucky economy. Approximately 65% of the dollars from an income tax cut would go to the richest 20% of Kentuckians, who make over $105,000 a year, according to the Institute on Taxation and Economic Policy. A total of 37% of the dollars would flow to just the richest 5%, who make more than $210,000 a year. And the richest 1% would be the big winners with an average tax cut of $11,056 from a 1 percentage point reduction in the income tax rate, as shown in the graph below.

The wealthy are able to save a much bigger share of their incomes than ordinary people whose budgets are tight. That means much of an income tax cut is likely to leave Kentucky for good and end up parked in the wealthy’s Wall Street accounts. Corporations are already seeing record profits, so giving them an income tax cut will likely end up funding stock buybacks and shareholder dividends (and 40% of shares are owned by foreign investors).