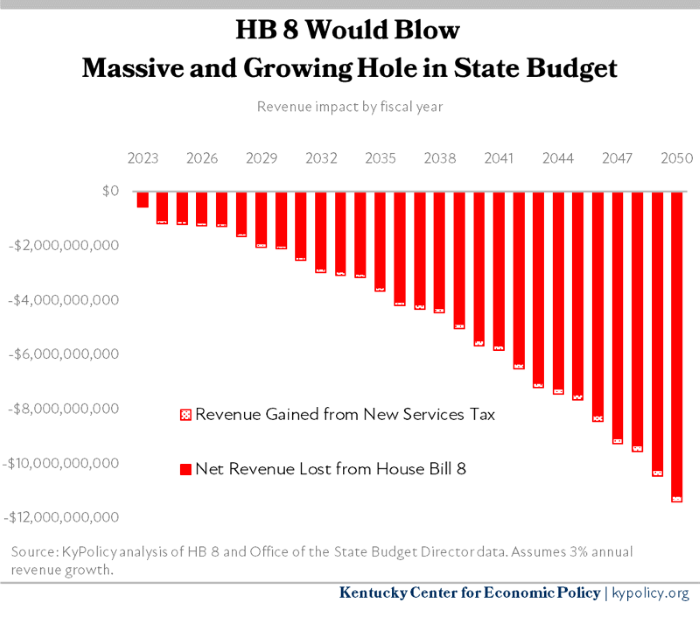 HB 8 would begin aggressively cutting Kentucky’s income tax rate next year and eventually completely eliminate it, devastating funding for Kentucky’s schools, health, human services, infrastructure and other needs. The resulting tax cut is skewed heavily to the rich. HB 8 includes a few modest revenue raisers that will come nowhere close to offsetting the lost revenue from the eliminated income tax, which funds 40% of Kentucky’s budget.

HB 8 is a reckless bill that would doom Kentucky’s schools and other public services and create a future of wider inequality, deeper poverty and stagnant economic growth.

Starting in 2023, the bill would cut Kentucky’s income tax rate from 5% to 4% at a cost of $1.1 billion to the state’s General Fund, or more than Kentucky spends on all of its universities and community colleges combined. That would immediately give an average tax cut of $11,056 to Kentucky’s millionaires, as shown in the graph below.

Additional income tax cuts will trigger automatically in the future because the dollar amount of revenues rises naturally due to inflation. But that can be happening while the state budget still shrinks dramatically in real terms. For example, state revenues are double what they were twenty years ago but government isn’t twice as big — in fact we have 6,800 fewer state employees today than back then due to 20 rounds of budget cuts after the Great Recession.

Currently, the income tax is 40% of revenue and is our most robust revenue source over time. Its contribution to the General Fund is about what we invest in public P-12 education. If HB 8 passes, Kentucky would be forced to make massive cuts in the services listed below.

At full elimination of the income tax, the giveaway to the top 1% grows to an average of $55,259, as shown below.

The new taxes in the bill raise only a tiny fraction of the money that is lost from cutting the income tax rate. HB 8 adds taxes on some obscure services including security systems, event planning, travel agencies and bodyguards. The bill also establishes two new taxes on electric and hybrid vehicles, peer-to-peer car sharing and similar services that generate a limited amount of money.

Under HB 8, the state would have an estimated $3.7 billion less by 2035 than would otherwise be the case and the new services sales tax would offset only 4% of the revenue that is lost.

That means 17% of General Fund revenue will be eliminated by 2035, forcing the state to make cuts equal to the size of what Kentucky spends on the entire Medicaid program, which provides health care to 1.5 million kids, seniors, low-income people and Kentuckians with disabilities. The hole just gets bigger from there.

Given how little revenue HB 8 raises compared to what is lost, lawmakers will have to look at raising the 6% sales tax rate in the future and applying it to items like groceries, prescription drugs and utilities. But that will just trigger additional income tax rate cuts, constituting a tax shift in which low- and middle-income people will pay more in taxes while the rich get even bigger tax breaks.

Cutting and eventually eliminating the income tax is deeply inequitable, and there is no way for Kentucky to replace the lost revenue. Contrary to false claims, income tax cuts are not an effective tool for attracting people or businesses. The few states without income taxes struggle to fund public services and are able to generate revenue from much bigger tourism and natural resource extraction economies than Kentucky has. States like Kansas that have cut income taxes in the last decade have seen revenues weaken and economic growth fail to keep up with the national average.

If anything in the direction of HB 8 becomes law, Kentucky will be forced to ravage funding for its schools and other public institutions and will face a bleak future where the wealthy are even wealthier and the rest of Kentuckians have scant access to education, health care and other critical needs.

Updated on March 4, 2022 to reflect the changes in the House Committee Substitute.