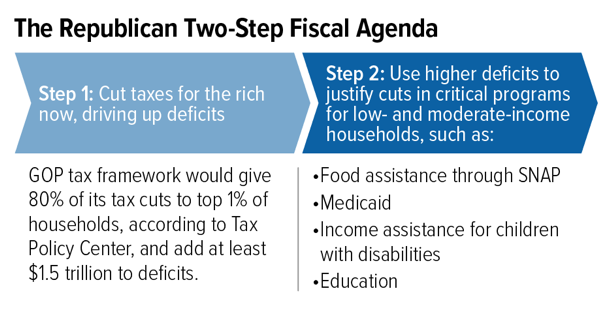 Now that the Senate and House have both passed budget plans that include a fast-track process for tax cuts, Congress is poised to launch the first step of a likely two-step tax and budget agenda. Step one is enacting tax cuts heavily skewed toward wealthy households and profitable corporations. Step two is paying for them later through program cuts that will deeply harm low- and middle-income Kentuckians.

Instead of trying to pass a single bill with both tax cuts and offsetting program cuts, the two-step strategy is an effort to distance the windfall for those at the top from the harm to low- and middle-income Americans. The tax cuts being discussed could increase the deficit by $1.5 trillion over the next decade, with a true cost that is likely even higher including because tax cuts do not pay for themselves. Eventually, the very same authors of expensive tax giveaways to the wealthy likely will point to investments in the safety net and middle class as the cause for the growing deficit and submit plans for deep entitlement and other spending cuts.

Blueprints for these cuts already exist in budget proposals laid out by the House, Senate and Trump Administration. Most Kentuckians would lose more from cuts to programs that support economic security and promote economic opportunity than they would gain from tax cuts slated toward millionaires. Here are some of the expected impacts of program cuts.

Rental assistance for vulnerable families is a likely target for cuts. The Senate and House plans both proposed cuts to Non-Defense Discretionary (NDD) funding and while neither specifies where the cuts would come from, the President’s budget hits housing assistance hard. In Kentucky, 153,584 people (76,039 households) receive assistance through Housing and Urban Development (HUD) rental assistance programs.

The budget proposals from President Trump and the House and Senate would cut health care and basic assistance for millions of low- and moderate-income seniors. All three budget plans call for cutting Medicaid – a primary source of funding for nursing home care for Kentuckians among other needs – and subsidies to purchase coverage through a health care exchange; and the House and Senate propose cutting Medicare by nearly $500 billion over 10 years. At-risk NDD funds for programs like housing assistance are an important support for elderly Kentuckians, as is federal food assistance which is also at risk (discussed below); 25 percent of Kentuckians receiving food assistance are elderly or disabled.

Programs that provide critical support for Kentuckians with disabilities are also likely targets for cuts, with the administration and congressional leaders already pointing to existing projected deficits to justify cuts. These programs include: NDD spending including housing assistance, Medicaid, Social Security Disability Insurance (SSDI), Medicare, food assistance, and Social Security Income (SSI provides income support for very poor individuals who are disabled or elderly). Representing just a portion of Kentuckians with disabilities who rely on these programs, there were 180,613 Kentuckians receiving SSI benefits and 203,471 receiving SSDI in December 2016.

Shrinking Investments in Students and Schools

Once a tax bill is passed and deficits grow, it will likely be argued that cuts to education are needed — especially since the House and Trump budget specifically propose NDD funding cuts to K-12 education. NDD funds in Kentucky support the two main federal grant programs for local schools (Individuals with Disabilities Education Act and Title I), Head Start, School Improvement Grants and adult education. In addition, financial aid for college students such as Pell Grants (part of Pell funding is NDD) is a potential target for cuts; 102,360 student in Kentucky received a Pell Grant last year.

The Supplemental Nutrition Assistance Program (SNAP) is also at risk for cuts. The House and Trump budget plans include at least $140 billion in cuts to SNAP over 10 years — and while the Senate doesn’t lay out specific programs cuts, the parameters it does outline could necessitate SNAP cuts similar to the other two budget proposals. In February 2017, 651,889 Kentuckians (308,453 households) were receiving SNAP with an average benefit per person, per meal of $1.36.

Most Kentucky Children Would Be Worse Off

When the bill on tax cuts comes due, many programs that provide support to Kentucky children could be cut. These include Medicaid, SSI, SNAP, tax credits for working families and other key investments such as education funding and housing, as discussed above; 41 percent of Kentucky’s SNAP recipients are under the age of 18.

Click here for fact sheets on how some of these critical investments help Kentuckians and here for how NDD funding is important to our state.