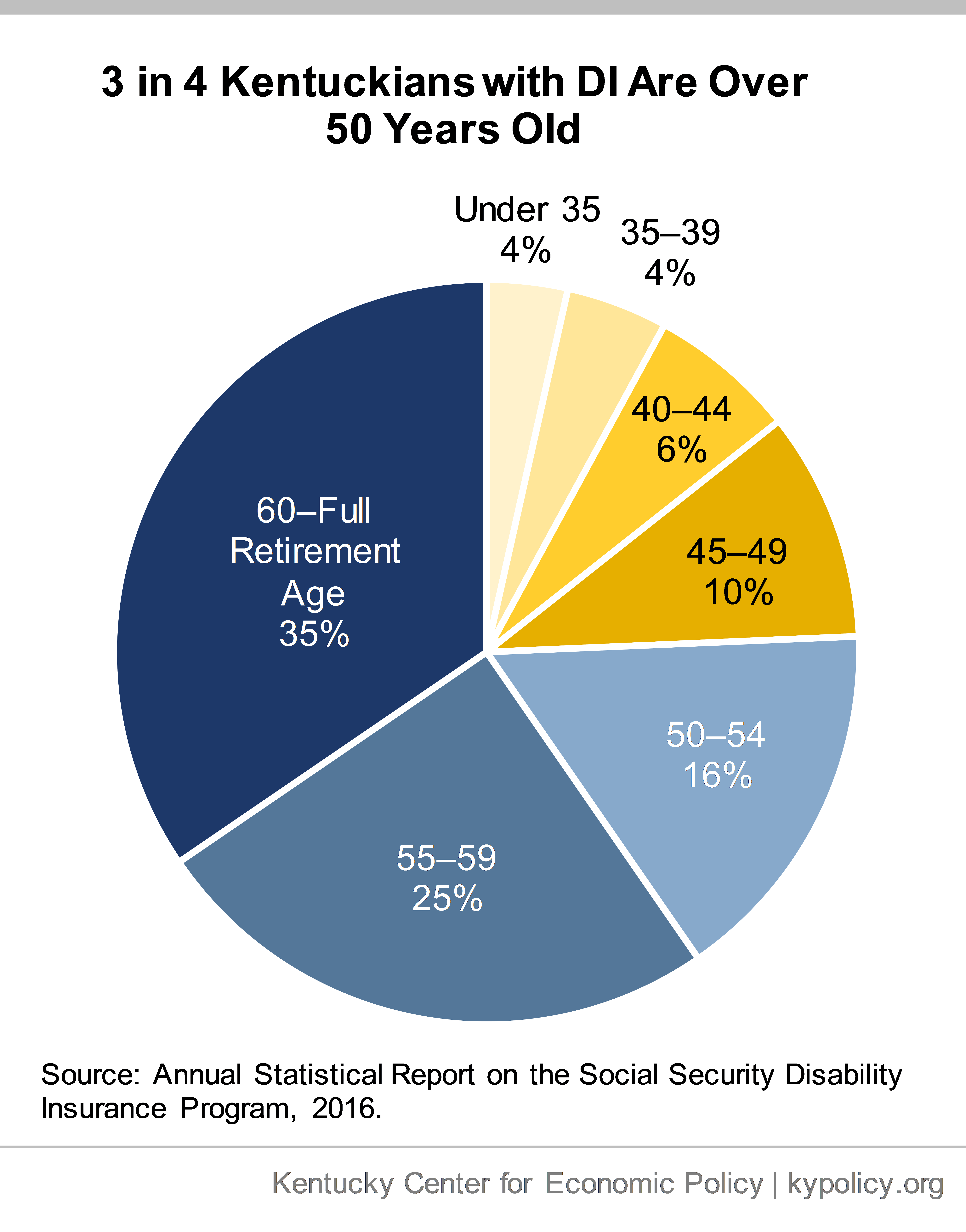 There are many misconceptions about Social Security Disability Insurance (DI). Despite recent arguments that DI is a hindrance to people’s wellbeing and the commonwealth’s economy, it is instead a vital lifeline for Kentuckians who, after working most of their lives, have their careers cut short due to a severe disability.

While some argue the considerable increase in DI beneficiaries in Kentucky is the result of a deficient culture that doesn’t value work, the data does not support this.  The rise in DI beneficiaries in Kentucky — from 125,832 in 2000 to 203,471 in 2016 — might seem alarming, but it is actually closely related to demographic factors, including the aging of the large baby boomer population and the increase in the number of women in the workforce who have the paid work history to qualify for DI.

Older workers are simply more likely to become disabled, and there has been growth in the number of older workers as the baby boomers aged. The likelihood that a worker will collect DI doubles between ages 30 and 40, 40 and 50, and ages 50 and 60. In Kentucky, 76 percent of DI beneficiaries are between 50 and 64 years old.

Kentucky, like the nation as a whole, has been undergoing a swell of population in that age group as the youngest baby boomers began to turn 50 in the late 1990s. 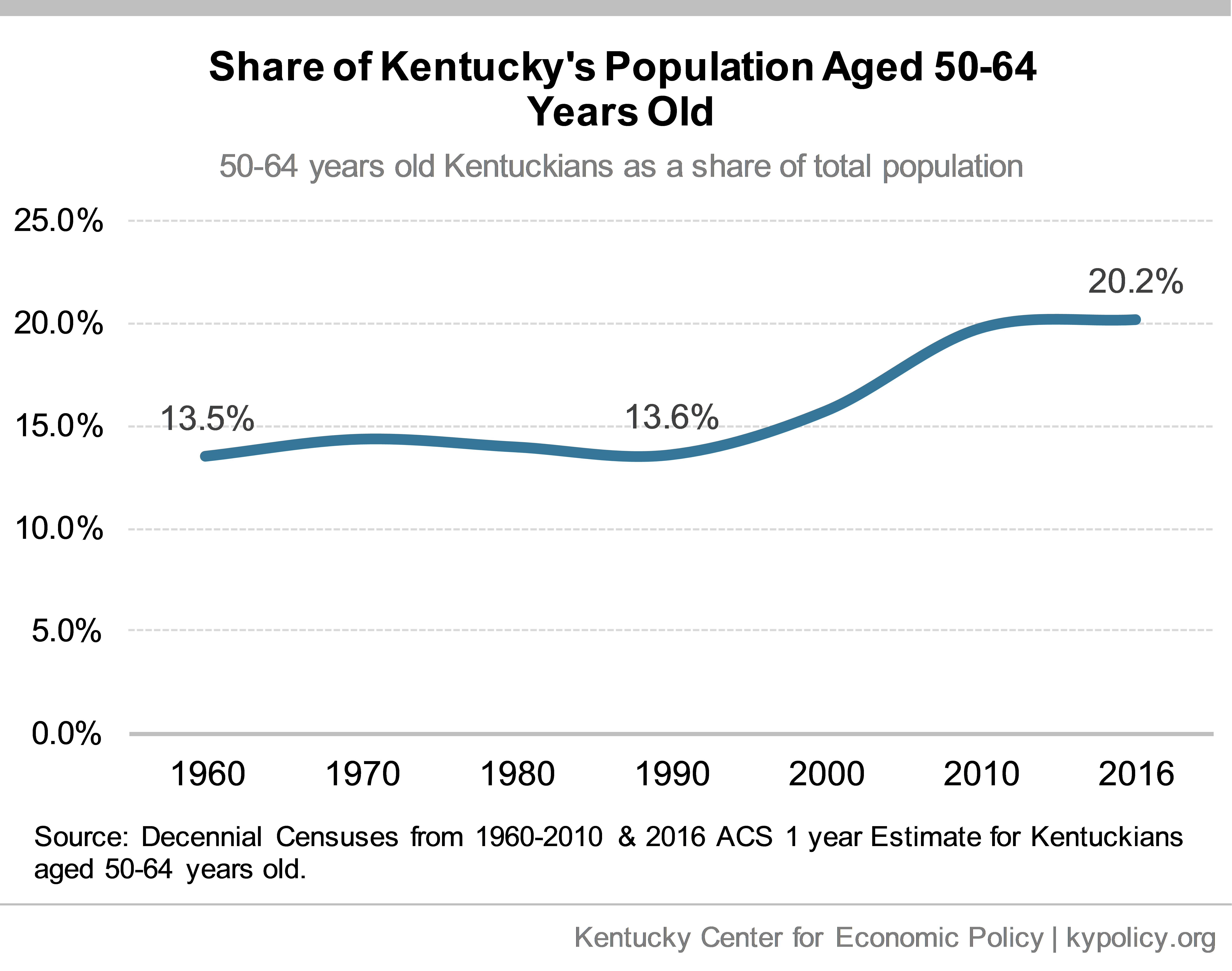 This also means, however, that we should expect the number of DI beneficiaries to decline as more boomers reach full retirement age – and out of eligibility for DI. And that is exactly what has been happening.

After rising for a number of years, DI enrollment in Kentucky has dropped every year since 2013.

More women have joined the paid workforce in recent decades, which has also added to the growth of the program. As an increasing number of women began paying into Social Security, they became qualified to receive DI if they developed a disability. And in fact the number of men receiving DI in Kentucky grew 41 percent between 2000 and 2016, but women with DI benefits nearly doubled, at 95 percent.

Some point to Kentucky’s high number of DI beneficiaries compared to other states as a reason for concern. However, most of the variation among states can be largely explained by four factors: a less educated workforce, an older workforce, fewer immigrants (as most immigrants do not qualify for DI) and an industry-based economy (including mining) that involves more physical wear and tear. Kentucky ranks high in these categories compared to other states:

Disability Insurance is hard to get, and not guaranteed for life

Concerns that DI in Kentucky is being overused reflect a fundamental misunderstanding about the program. It is actually very difficult to be approved for DI — in Kentucky as well as nationally. People without a history of work certainly do not qualify, and the benefit ends either when beneficiaries are well enough to return to work or when they reach full retirement age. Here are some important facts to keep in mind:

DI benefits are modest – Benefits for the small portion of disabled Kentucky workers who are approved for DI are modest, which is another aspect of DI that is commonly misunderstood. The median monthly benefit for a DI recipient in Kentucky was $1,055 per month in 2016. When annualized, this median benefit was $12,660 – which is barely above the poverty line.

Kentuckians who apply for DI are among the most vulnerable –  Medical conditions that qualify for DI include cancer, kidney failure, congestive heart failure, crippling injuries and severe mental disorders. These are massively disruptive to everyday life, let alone a career. In fact, before being approved for disability, the percent of applicants performing meaningful work activity declines for years and few disabled workers are able to go back to work whether or not they were approved for benefits.

DI helps people to live longer – One criticism recently leveled at DI is that DI beneficiaries are more likely to die than other people, suggesting that increased mortality risk was somehow because of DI. While it is true that DI beneficiaries are at a higher risk of mortality than the general population, that is in large part due to the fact that they have a severe medical condition. It is the disabling medical condition that drove people to seek help through DI that increases their risk of dying relative to everyone else, not the benefit. In fact, a study by researchers from the National Bureau of Economic Research and the Social Security Administration found that DI beneficiaries live longer than similar people who did not receive DI benefits. On average, they found that for every $1,000 in DI benefits, the risk of death among lower-income beneficiaries decreased 0.1-0.2 percentage points.