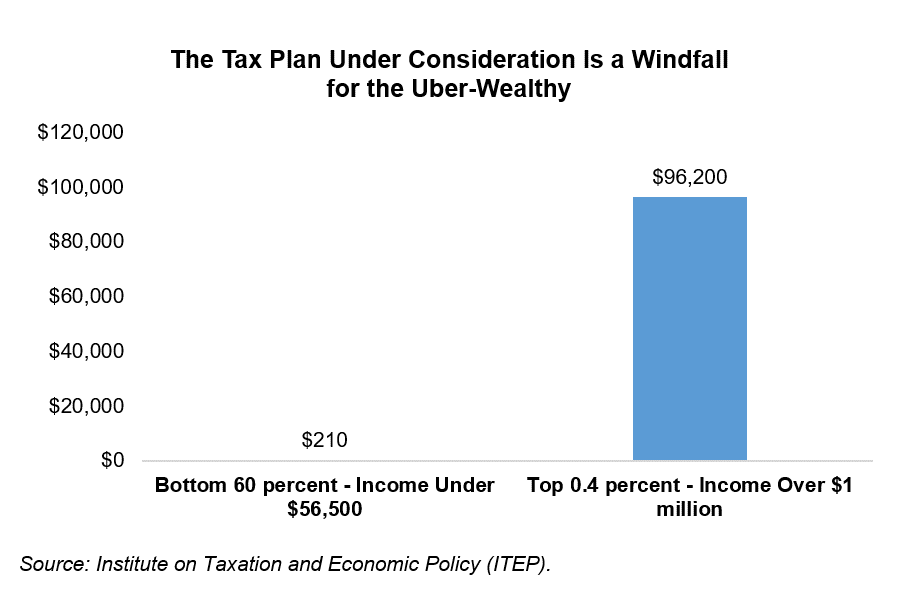 Under the tax framework released last week by the Trump administration and Congressional leaders, the wealthiest 1 percent of Kentuckians would get 49.5 percent of the total tax cut received by people in the state, according to a new report by the Institute on Taxation and Economic Policy (ITEP). Though the proposed framework has been hailed as a tax break for the middle class, the report finds it would redistribute massive amounts of wealth upward, while raising taxes for some and worsening income inequality nationwide.

The plan’s cuts are extremely top-heavy

It isn’t just low and middle income Kentuckians and Americans who lose out in the plan – it is anyone who is not ultra-wealthy. In Kentucky, those making less than $460,800 would see an average tax cut between 0.6 and 0.8 percent as a share of their income in 2018, while people making more (those in the top 1 percent) would see their income increase by 3.2 percent on average. The graph below puts the dollar size of the impact of these tax cuts into perspective. 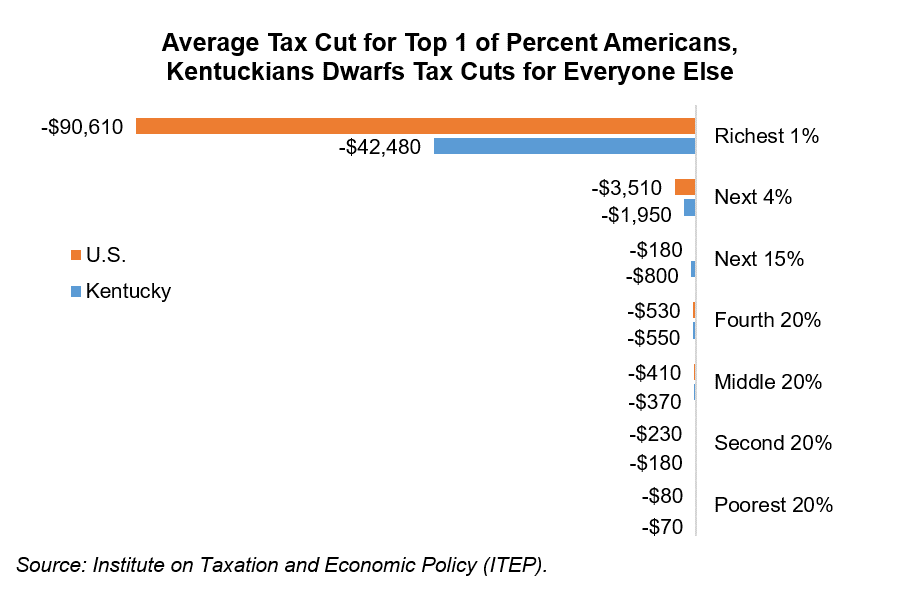 As is also illustrated in the graph, because Kentucky has fewer wealthy people and they aren’t as rich as wealthy people nationwide, their average tax cut and the total tax cut Kentucky receives are smaller. Though Kentucky tax returns comprise 1.3 percent of total U.S. tax returns in ITEP’s analysis, the commonwealth will receive only 0.9 percent of the benefit from the net tax cut.

The plan will become more top-heavy over time because of a slower-growing inflation index than what is currently used and the fact that the plan’s boost in the Child Tax Credit is not indexed to inflation. The Tax Policy Center estimates that by 2027, 80 percent of the benefit of tax cuts would go to the richest 1 percent of Americans. Income inequality is already too high and growing in Kentucky and the nation, and the plan will only exacerbate the trend.

The Devil is in the details

Although the plan slightly expands the Child Tax Credit and creates a new credit for non-child dependents, a larger, more fully refundable Child Tax Credit for an expanded group of low- to middle-income families and an expanded Earned Income Tax Credit – paid for by cleaning up tax breaks for corporations and the ultra-wealthy – could do more to grow and lift America’s middle class. But the plan doesn’t propose these types of changes. Rather, it slashes taxes for the wealthy and mostly neglects everyone else. The plan would:

The plan would also repeal the estate tax on large estates/wealthy heirs, the domestic production deduction and other unspecified tax breaks for businesses, and would allow businesses to deduct or “expense” the value of their capital expenditures rather than depreciate those expenditures over time.  The framework also eliminates corporate taxes on offshore profits (this final component is not included in ITEP’s analysis but would overwhelmingly benefit those at the top).

This “Robin-Hood-in-reverse” approach to tax reform would cut federal revenue by $233.8 billion in 2018 and by $2.4 trillion over the next decade. This week, the U.S. Senate is marking up their budget resolution, which incorporates provisions to ease the way for the tax cuts. Specifically, these provisions would fast-track the cuts, allow an increase the national deficit by $1.5 trillion over 10 years and cover the rest through deep budget cuts to programs like Medicaid, Medicare and Social Security which help millions of low and middle-income Americans meet basic needs.

Despite the insistence that tax cuts for the wealthy and corporations improve economic growth and trickle down to everyone else, the evidence suggests the opposite would occur: by forcing budget cuts in programs that provide key supports for low- and middle-income people, tax cuts like these will deepen poverty and inequality in Kentucky and America.