Medicaid provides health care coverage to over 1.4 million Kentuckians. For over 50 years it has helped pregnant women, children, people with disabilities and seniors and in the past 3 years it has allowed all low-income Kentuckians under 138 percent of poverty to get care when they need it. This critical health program has been at risk in 2017 for severe cuts under healthcare repeal efforts in Congress, and will face continued threats for more cuts through the federal budget process and the changes to Kentucky’s Medicaid program proposed to the federal government.

Medicaid covers 1 in 3 Kentuckians. Over 475,000 of those are people newly covered thanks to the 2014 expansion of eligibility for Kentuckians with incomes up to roughly $16,670 for an individual. Medicaid works well as a program that responds to poverty – the parts of the state with the deepest poverty have the highest rates of Medicaid coverage.

Medicaid covers 537,736 Kentucky children – or 42 percent of all children across the commonwealth. Over half of children with disabilities and 81 percent of children from families at or near the poverty line are covered by Medicaid. Children receive a comprehensive set of health services through Medicaid known as Early Periodic Screening Diagnostic and Treatment that ensures children have routine screening for various disabilities and health issues and coverage for subsequent treatment when needed.

Children who are covered by Medicaid have been shown to do better later in life in a number of ways. Research has shown Medicaid-covered kids have more success in school, become healthier adults and are more financially successful as adults than similar kids who didn’t get Medicaid.

Women comprise 55 percent of Medicaid enrollees in Kentucky, and receive important health care services like gynecological care and mammography through the program. Medicaid also pays for prenatal services and 44 percent of all births in the commonwealth. Even before Kentucky expanded Medicaid in 2014, low-income pregnant women were covered by Medicaid through birth and for a short period of time post-partum. This was especially important prior to the passage of the Affordable Care Act when commercial insurance carriers who sold policies directly to people (rather than through an employer) were not required to offer maternity care as a benefit.

Roughly 1 in 6 Kentucky seniors (people 65 years old and older) receive Medicaid, according to 2015 Census data. Contrary to what many people assume, Medicare is not comprehensive: it does not cover many health care services for seniors, including long-term care. Medicaid picks up much of the cost for seniors who cannot afford to cover gaps in Medicare coverage. In fact, Medicaid pays for 54.7 percent of nursing home care. It also covers over 39,000 Kentuckians using Home and Community Based Services through Medicaid, which includes both seniors and people with disabilities. These services allow dependent adults and children with significant medical needs to stay with their families and in their communities rather than receive care in an institutional setting like a nursing home. These services cost roughly a third of what they would in a nursing home setting.

There are over 770,000 Kentuckians with a disability that interferes with their everyday lives. These disabilities often require medical attention that far exceeds average health care costs for people without disabilities.  For all but the most wealthy individuals, the extra costs associated with that care are difficult or impossible to manage. Medicaid is a crucial program for people in this situation. In addition to providing coverage for costly residential long-term care for those who need but cannot afford it, in Kentucky Medicaid pays for six special programs (known as waivers) for individuals who wish to remain in the community, but cannot afford to do so on their own. 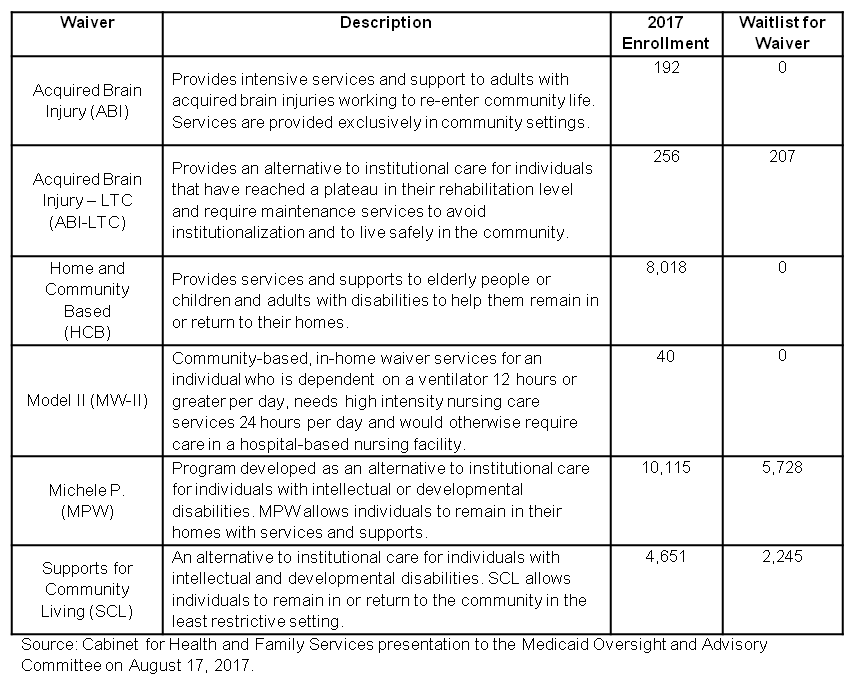 Many more Kentuckians receive Medicaid due to a disability but are not waiver recipients because their disabilities don’t require nursing facility level care or wraparound community-based services. Medicaid also pays for $34.5 million in in-school health care services for children, primarily those requiring medical assistance under the Individuals with Disabilities in Education Act.

What does Medicaid Coverage Mean for Kentuckians?

With the recent expansion of Medicaid came a dramatic increase in health care coverage. Because of that, more Kentuckians are able to get health care services and have started down the long path toward better health. And according to a study from the Harvard School of Public Health, Medicaid expansion-eligible adults in Kentucky and Arkansas, where Medicaid eligibility was expanded, have seen more improvement in health access and outcomes than in Texas, which did not expand Medicaid.

After the expansion of Medicaid, more Kentuckians began using primary care, getting screenings for potentially dangerous conditions, taking prescribed medicines rather than skipping them due to cost, and receiving routine care for chronic conditions. One particularly astounding increase in care is the 500 percent increase in Medicaid-funded substance abuse treatment between 2014 and 2016. And because more Kentuckians are using care in the doctor’s office, fewer are seeking care in the more expensive emergency room as their usual source of treatment.

Kentuckians are getting healthier

Receiving more screenings and regular health services in a primary care setting is putting many Kentuckians on the path to better health, which is starting to show up in the numbers. Preventable hospitalizations for ailments like asthma and hypertension have fallen since before expansion. Breast cancer deaths and infant deaths have both fallen in Kentucky. And along with an increase in smoking cessation counseling, fewer Medicaid-expansion-eligible Kentuckians are smoking, which is important as Kentucky leads the nation in lung cancer deaths. There has even been a five percentage point increase in Medicaid expansion-eligible adults reporting excellent health.

How Does Medicaid Impact Kentucky’s Economy?

Medicaid spending is an investment in our state and local economies: funding is disbursed to hospitals, clinics, pharmacies, long-term care facilities, and many other kinds of healthcare providers who use portions of that money to hire more people and build new facilities. The resulting salaries circulate through local businesses and generate more tax revenue to be reinvested back into the community. Furthermore, better health improves Kentuckians’ ability to earn income and pay taxes.

Kentucky invested nearly $5.8 billion in care for Medicaid enrollees in 2012; by 2016 that amount had risen to $10 billion. The majority of these resources were from the federal government, including all of the funding increase for the Medicaid expansion in 2014-2016. This is a windfall not only for patients and health care providers, but also for local economies. Estimates for the level of increased economic activity generated by investment in health care vary, but they range from $1.50 to $2.00 for every dollar invested.

Since December 2013, the month before Kentucky expanded Medicaid, Kentucky has added over 15,000 health care and social service sector jobs and added them at a faster pace than the preceding years, according to BLS data. Half of those added jobs were in hospitals even though hospital jobs only make up a third of that sector overall.

Less Uncompensated Care for Providers and Debt for Individuals

The influx in funding associated with the expansion has made a huge difference for providers who otherwise might not have been paid for the care they offered. Uncompensated or charity care has dropped 67 percent since 2012 according to a study on the implementation of ACA in Kentucky. 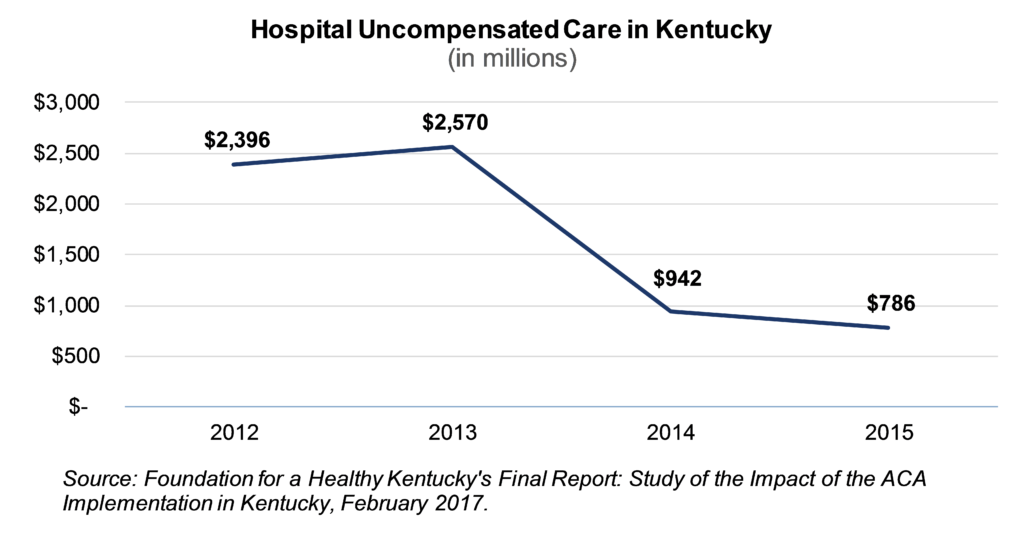 The growth in Medicaid coverage has also helped reduce unpayable medical bills among patients. According to the Urban Institute, past-due medical debt dropped from 42.1 percent of adults aged 18-64 in 2012 to 30.9 in 2015, nearly a 27 percent decline. This is an important development as health care related debt is a major contributor to personal bankruptcy.