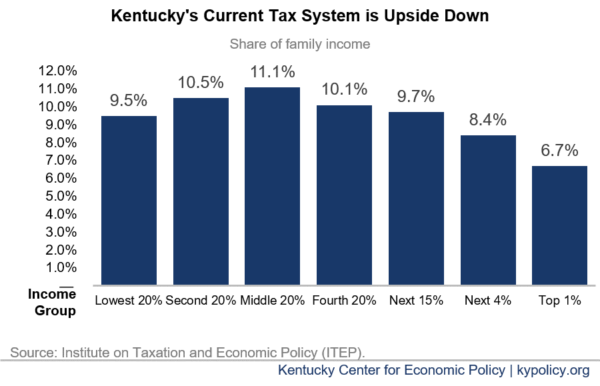 A new bill would generate substantial new revenue for Kentucky’s budget by asking those at the top and corporations to chip in a portion of the enormous federal and state tax cuts they have received in recent years for the investments that benefit all Kentuckians.

HB 416, sponsored by Representative Lisa Willner, would take a big step toward cleaning up the tax code and addressing our upside-down system — which currently requires low and middle-income Kentuckians to contribute a higher share of their income in taxes than the wealthy. The additional resources generated by the proposal will provide what is needed for Kentucky to truly address its budget crisis — allowing the reinvestment of substantial dollars in public education, human services, health, infrastructure and other needs — while responsibly paying down pension liabilities and providing much needed raises for public employees and teachers. The proposal also creates a tax system that will grow with the economy and be sustainable over time, allowing Kentucky to make needed public investments far into the future.

Kentucky’s current tax system lets those with the greatest ability to pay taxes contribute the least as a share of their income. A study by the Institute on Taxation and Economic Policy shows that low- and middle-income people pay between 9.5% and 11.1% of their income in total state and local taxes, while the top 1% pay only 6.7%, as shown below.

That problem was made worse in 2018, when the legislature got rid of the graduated income tax rates the state had for nearly 100 years, which ranged from 2% to 6%, and shifted to a flat income tax of 5%. The bill also lowered the top corporate income tax rate, raised sales taxes on services and made other changes. Under that law, the bottom 95% of Kentuckians on average paid more in taxes, while the top 5% got tax cuts — especially the top 1%, who received an average tax cut that now equals $6,605 (see below). The General Assembly followed that up in 2019 with legislation that cut taxes for banks and corporations. 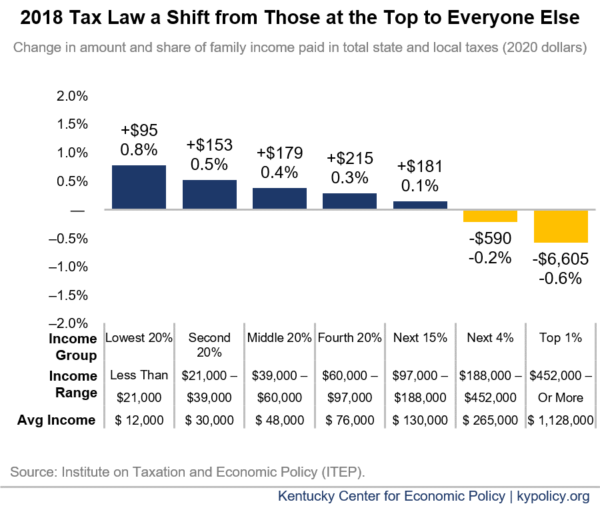 HB 416 helps address those problems. Its most important components are changes to the individual income tax, in particular a return to graduated rates based on ability to pay as exists in the majority of states. Other changes protect everyday Kentuckians and ask more of those with greater resources, including an increase in the standard deduction to $4,000, an increase in the retirement income exclusion back to $41,110 but with a phase-out at higher incomes, and a cap and phase out of itemized deductions for those with higher incomes (with the exception of charitable contributions), along with a few other changes.

Under the plan, the bottom 80% of Kentuckians by income would see either modest tax reductions or practically no change on average in what they pay, as shown in the graph below. Those on the upper end would pay more, with greater increases for people who make more than $188,000 a year. 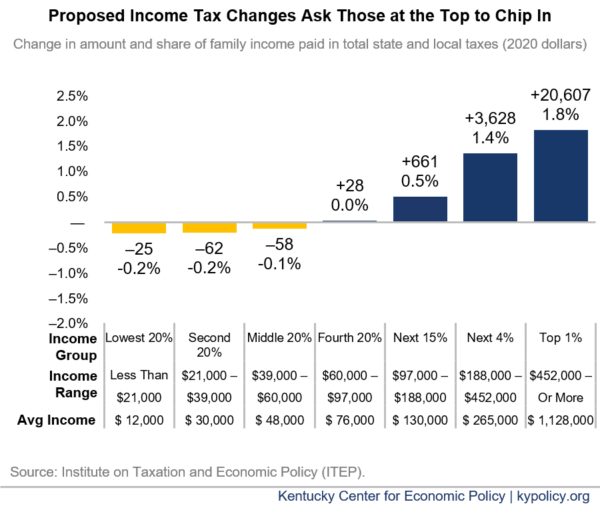 Importantly, those who would chip in more under this proposal are the same people who received huge tax reductions from federal tax cuts passed by Congress and the Trump administration in 2017 and the 2018 state tax cuts. The table below illustrates that after the income tax increases proposed by HB 416, those at the top would still pay less in overall state and federal taxes than they did just three years ago. A portion of the tax cuts they received would simply be reinvested into growing the economy for all Kentuckians. 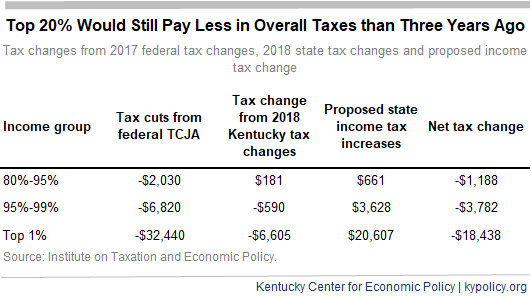 At the same time HB 416 creates more balance in Kentucky’s tax system, its income tax changes would raise approximately $900 million in revenue for important investments in our state budget, according to an estimate by the Institute on Taxation and Economic Policy.

With HB 416, Kentucky would rejoin the 32 states with graduated income tax rates and would reap the economic benefits of a tax system that allows sustained investment in schools, health, infrastructure and other areas necessary for a strong economy. Research supports the strategy of asking more from those at the top:

Neither academic literature nor the experience of states that have moved away from income taxes support the claims that reducing them improves economic growth. In fact, states that have shifted their reliance from income taxes towards consumption taxes in recent years have faced significant budget challenges, and states like Tennessee that do not have individual income taxes struggle to fund core services like education. In states like Kansas, Maine, North Carolina, Ohio and Wisconsin that have cut income taxes in the last decade, economic growth has been relatively poor and remains comparatively weak. Kansas famously had to roll back its income tax cuts after the promised “trickle-down” benefits never materialized. And based on Kentucky’s own revenue estimates for the upcoming biennium — which are the worst in the 25 years the state has had a consensus forecasting process — our own state has become another example of how regressive tax shifts slow revenue growth.

The theory underlying a shift away from income taxes — that doing so attracts businesses and people to a state — is not supported by evidence. Most all job growth comes from businesses already in a state despite its tax structure, or from new start-ups that don’t benefit from lower income taxes because they typically lack tax liability. Those few out-of-state corporations choosing a new state do so primarily because of the skills of the workforce, quality of the infrastructure and proximity to suppliers and markets. Also, relatively few individuals move between states, and those that relocate do so primarily for family considerations, job opportunities, housing costs or the weather, not taxes.

The bill makes other commonsense tax changes to raise additional revenue, including the following:

HB 416 makes possible investments that will create a thriving Kentucky

With the more than $1 billion in new revenue from HB 416 — an approximate 10% increase in General Fund resources — Kentucky could make important and needed investments in many areas, including some of the following (cost estimates included where available):

Unlike other revenue ideas, HB 416 is not simply a short-term band-aid for the budget. Instead, it provides long-term, sustainable revenue that will expand opportunity and grow with the economy. The centerpiece of the plan relies on the individual income tax, which has and will be Kentucky’s most robust revenue source over the long-term. Fixing the state’s flawed income tax structure will also ensure revenues remain adequate over time, since most income growth in Kentucky and the nation continues to flow to those at the top.

Failure to enact revenue policies that move us forward in a significant, sustainable way will lead to the continued erosion of the investments that keep us educated, healthy and safe. HB 416 represents true reform of the tax code that will provide what Kentucky needs now and in the future to shore up our ailing, chronically underfunded systems and programs. It makes possible investments necessary for Kentucky to truly thrive.