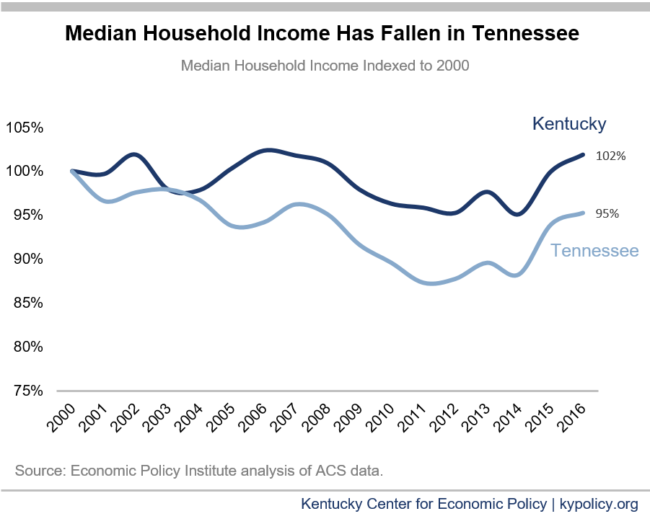 Proponents of shifting away from income taxes often point to Tennessee’s heavy reliance on sales taxes as a formula for economic growth in Kentucky. But research does not support the idea that cutting income taxes, a huge tax break for the wealthy, and shifting to a consumption-based system that asks more of those with less will help a state’s economy. Furthermore, a closer look at the consequences of Tennessee’s tax policies – for example, a deeply upside down tax system at odds with the economy, the need for regular sales tax rate increases and one of the worst school funding levels in the country – reinforces that Tennessee does not have tax policy Kentucky needs.

Kentuckians are familiar with the claim we can improve our economic standing relative to other states by reducing certain taxes, especially income taxes. In 2008, economists at the Center on Business and Economic Research (CBER) at the University of Kentucky explored this suggestion by examining the impact of various factors on Kentucky’s and our neighbor states’ economic growth. They found individual and corporate income taxes as a share of the economy do not have a statistically significant impact on states’ economic growth.1 Rather, the variables they found most significantly related to growth have to do with a state’s “stock of knowledge” – educational attainment, the average number of patents per resident and research and development spending.2 Those factors depend in significant part on the investments made with state tax revenue.

CBER’s findings are in line with a growing body of research showing that reducing state income taxes is unlikely to speed economic growth.3 The reasons why include:

Despite the evidence, many states have experimented with cutting income taxes in recent years under the misguided promise that doing so would be an effective way to improve job and economic growth. Kansas’s disastrous (and recently partially reversed) attempt to “march” income taxes “to zero” is a chief example.6 Instead of states’ economies leaping ahead, income tax reductions often have been followed by ballooning structural deficits and harmful budget cuts to education and other essential investments. For instance, 7 out of the 12 states that have cut their core K-12 education funding the most since the recession (2008-2018) have also cut income taxes since 2008.7 North Carolina, among that group of 7, started phasing in corporate and individual income tax cuts in 2013 estimated to cost $3.5 billion annually on full implementation in 2019.8 And despite being championed as an exemplar of income tax cutting, North Carolina has economically underperformed two out of four neighbor states in total private employment growth and three out of four neighbor states in real GDP growth since the tax cuts were implemented.9

Tennessee’s Economy is Leaving Families Behind

Simple comparisons between Kentucky and Tennessee that make broad claims based on any single policy or factor are misleading and erroneous. There are many differences between the two states shaped by their unique histories – the size of their tourism industries, the number of large cities and the presence of institutions like Tennessee’s Oak Ridge National Laboratory, Vanderbilt University and Tennessee Valley Authority to name a few – that necessarily complicate comparisons.

That being said, it is not clear Tennessee is heading in a stronger direction than Kentucky. Both rank low on many indicators of overall well-being including families’ economic security. While Tennessee’s current median household income is slightly better than Kentucky’s – $48,547 compared to $46,659 in 2016 – the trajectory since 2000 favors Kentucky with median income having grown (1.9 percent) but having fallen in Tennessee (-4.7 percent).

Compared to wealthy households, low- to moderate-income families pay more in sales taxes because they have to spend a larger share of their income to meet their basic needs (rather than saving or investing), meaning a larger portion is subject to taxation. On the other hand, an income tax with graduated rates that rise as one’s income increases is based on taxpayers’ ability to pay. Shifting from income taxes to sales taxes would make Kentucky’s tax system more steeply “regressive” – that is, carried more heavily by middle- and low-income families – like Tennessee’s.11 For example, replacing 100 percent of Kentucky’s income tax revenue with revenue from an expanded sales tax would be a tax cut of $32,000 a year for the wealthiest 1 percent of Kentuckians, and a tax hike on the bottom 60 percent of Kentuckians.12

As a result of its heavy reliance on sales taxes and lack of a broad-based income tax, Tennessee has the seventh most regressive revenue system in the country.13 As the graph below shows, the wealthiest 1 percent of households in Tennessee pay only 3 percent of income in state and local taxes, while the poorest 20 percent pay 10.9 percent. Kentucky’s tax system is also regressive, but less so, ranking 33rd most regressive overall: the wealthiest 1 percent of families pay 6 percent of their income in state and local taxes, while families at the bottom pay 9 percent. 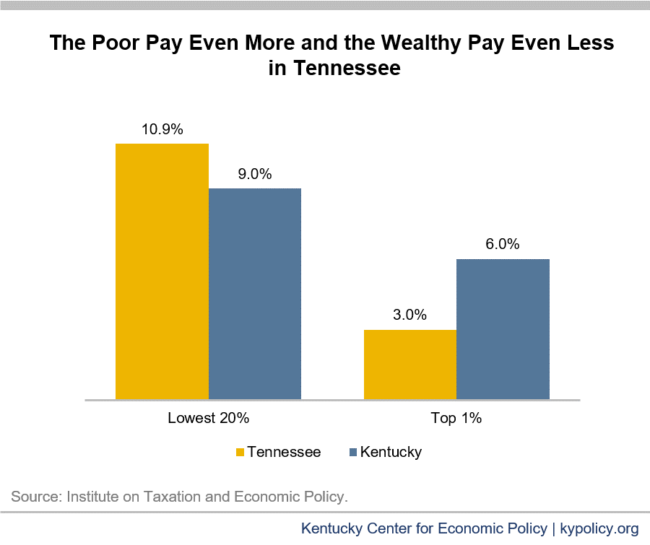 An upside-down tax system also undermines revenue growth in an economy where such a large share of all economic growth is being captured by the very wealthy. According to analysis by the Economic Policy Institute, in Kentucky between 1979 and 2013, real income for the top 1 percent grew 60 percent but fell for everyone else by 3 percent.14 Cutting income taxes to become more like Tennessee would be a huge tax break for the wealthy that would make our revenue system even less able to keep up with economic growth than it already is.15 In other words, a consumption-based tax system would make it harder to reliably invest in education and other core building blocks of widespread prosperity. Research from Standard and Poor’s credit rating agency finds that sales tax reliant states have an especially hard time maintaining revenue for investments at a time of growing income inequality.16

The graph below compares annual sales tax revenue growth rates in both Tennessee and Kentucky to annual income tax growth in each state (Tennessee’s very limited Hall Tax on investment income comprises two percent of state revenue and is being phased out). In Tennessee, even with a broader sales tax base that includes groceries and more services (67) than Kentucky’s (28, no groceries), sales tax growth lags behind income tax growth.17 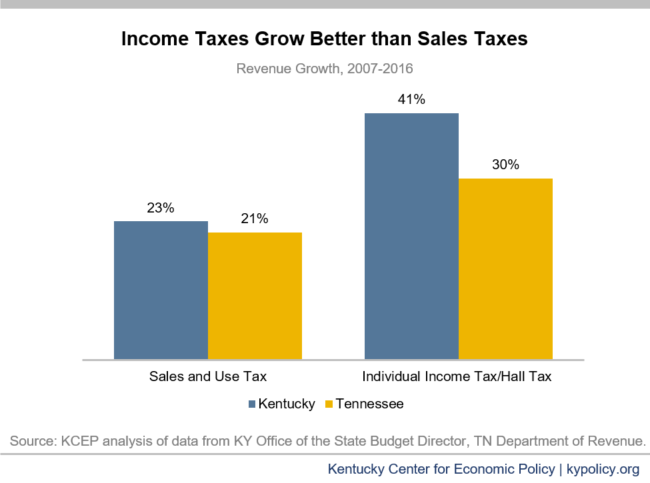 This slower growth translates to fewer dollars for investments over time. If Kentucky’s individual income tax had grown between 2007 and 2016 at the overall rate of the sales tax (23 percent) instead of its own more robust rate (41 percent) – a proxy for what might have happened if we shifted completely from income to sales taxes in 2007 – we would have had $544 million less in revenue in 2016. That’s about the total budgeted amount that year for child care, preschool, family services (child protection, home safety, preventive services), school-based Family Resource and Youth Service Centers (FRYSCs), career and technical education and Community Mental Health Centers combined.18

With a full 60 percent of Tennessee’s General Fund revenue coming from the sales tax (see pie chart below), its slower growth fundamentally shapes decisions the state makes about taxation and investments. As Tennessee’s comptroller explained last year, “Since the 1960’s Tennessee’s primary source of revenue has been the sales tax. As the cost of government operations increases, the General Assembly has raised the sales tax rate every 6 to 8 years to continue providing the same services.”19 As noted previously, these sales tax hikes hit low-income families the hardest and ask the least of those with the most wealth. 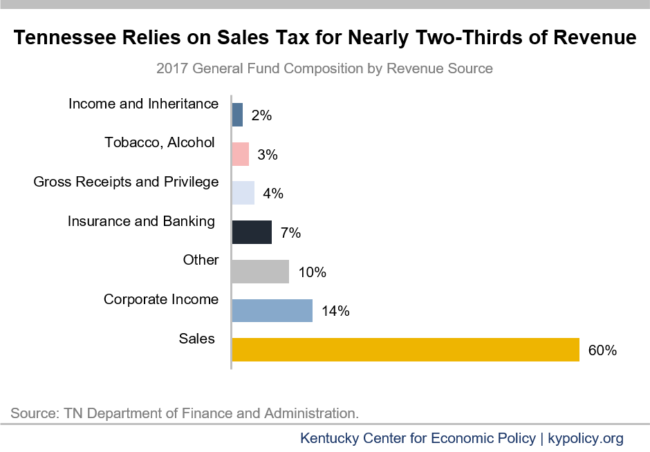 Kentucky’s revenue system – though certainly in need of reforms that help revenue better track the economy – has a more balanced and reliable mix of revenue sources.20 Our main source of General Fund revenue is the individual income tax, comprising 42 percent of the General Fund in 2017, with sales and use taxes comprising 33 percent. 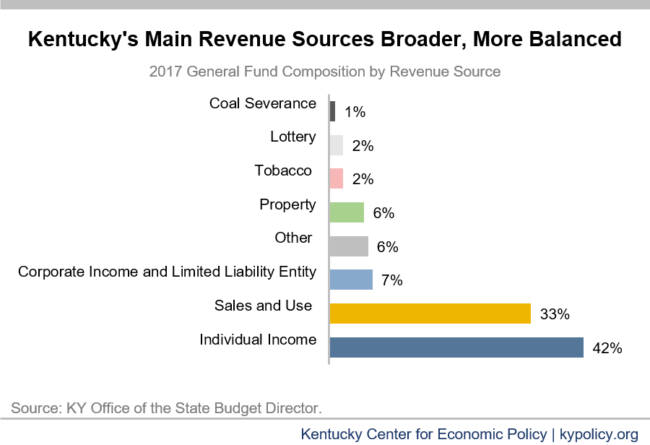 Tennessee is Underinvesting in Its Kids

Both Tennessee and Kentucky spend around half of their state revenue on education – 53 percent and 48 percent, respectively – making it the top priority public investment in both states.22 However, the amount we spend per student vastly differs: in 2016, Tennessee ranked 42 out of 51 states and the District of Columbia for the level of public school revenue per student ($10,210) based on average daily attendance. Kentucky, in contrast, ranked 26th at $13,128 per student.23 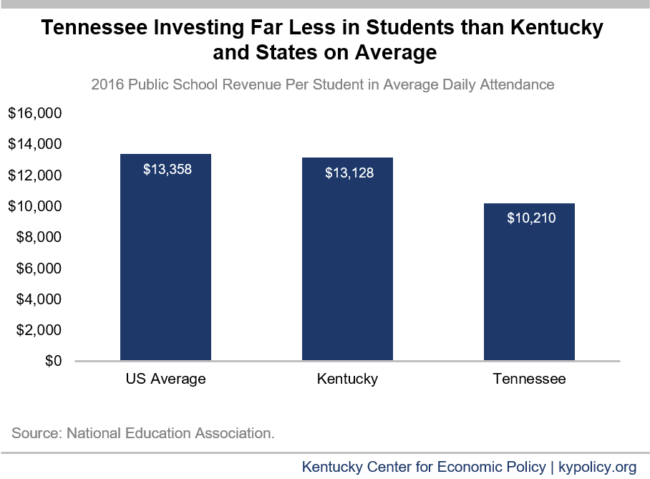 The University of Kentucky’s Center for Business and Economic Research finds that, once obstacles to desirable education outcomes like poverty, poor health and limited English proficiency are accounted for, Kentucky is 1 of just 11 states where the return on investment for education spending is higher than would be expected.24 In other words, Kentucky invests in its students efficiently and effectively.

Tennessee’s education funding challenges have come close to a breaking point in recent years. A number of school districts have filed lawsuits against the state for unconstitutionally inadequate funding.25 And in 2013, in order to cut costs, the state moved teachers onto a hybrid pension plan instead of the previous defined benefit program – a move that will lower teachers’ overall compensation and make it more difficult to attract and retain the best teachers.

Transitioning to a Tennessee-like tax system would put Kentucky’s education gains at greater risk than they already are – including by causing school districts to compensate for slower state revenue growth with a heavier reliance on local revenue. In Kentucky, local public school revenue in 2016 comprised 32 percent of total state and local revenue, while in Tennessee, it was 44 percent.26 Due to the disparities based on property wealth in what Kentucky’s school districts can generate from local taxes, shifting more public school funding to the local level would worsen the already growing gap between poor and wealthy districts.27 A lack of equity in funding is what led to the Kentucky Educational Reform Act in 1990 which raised significant new revenue, primarily from strengthening the income tax.28

Cleaning up tax breaks, not adding more for people with the most money and influence, will put Kentucky on the path to stronger investments in education, infrastructure and other building blocks of thriving communities. Shifting to a Tennessee-like sales tax based system would add more tax breaks for the wealthiest people, undermine the investments in our communities and our future that benefit us all, and necessitate ongoing tax hikes which are likely to fall heaviest on low income-families.