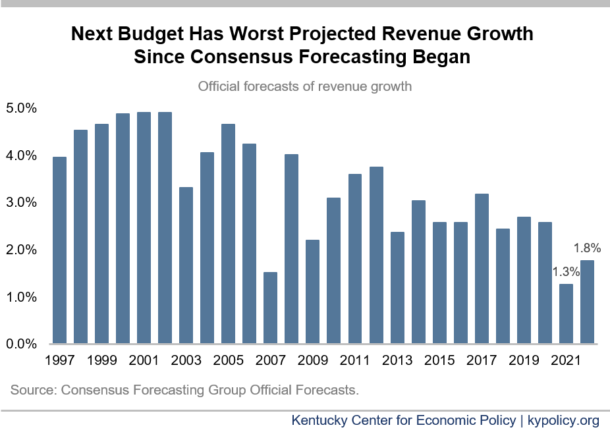 Next week, Governor Beshear will present his state budget proposal to the General Assembly and the legislature will begin crafting a new budget for the next two years. Due in large part to recent tax cuts, they will do so with the worst projected revenue growth since the state established the modern consensus forecasting process.

By law since 1996, the legislature creates Kentucky’s two-year budget based on official revenue projections made by an independent body of experts known as the Consensus Forecasting Group (CFG). That group’s official projections must be certified by the 15th legislative day of a budget session.

The graph below shows the official CFG growth projections that were the basis of each budget going back to 1997. The estimate for 2021-2022 of 1.3% growth in the first year and 1.8% in the second year is the weakest projected biennium of revenue growth Kentucky has had since the CFG was established.

There is one main reason these projections are especially poor: tax cuts for banks, corporations and wealthy individuals passed in the 2018 and 2019 legislative sessions. Those tax cuts reduced the individual and corporate income tax rate down to a flat 5%, eliminated the bank franchise tax, provided an expensive tax credit for business inventories and gave away a wide variety of other corporate tax breaks and exemptions. The legislature attempted to offset the 2018 cuts with taxes on services, limits on income tax deductions and a higher cigarette tax, but that revenue bump will fade over time compared to faster-growing revenue losses from the tax cuts.

In addition, the graph shows a clear a downward trend in revenue projections over time. This trend is happening in part because 2018 and 2019 were not the first years in which the General Assembly enacted a significant number of tax giveaways; they are just the latest. Because of year after year of new tax breaks and a continuing failure to close loopholes and end tax exemptions, Kentucky has experienced the erosion of revenue over time, as described in our recent budget preview report.

What does the weakest revenue forecast in recent history mean? It means less money for the upcoming budget to support schools, higher education, human services, health and more. When we provide tax giveaways to special interests, we have less available for the investments that benefit us all.