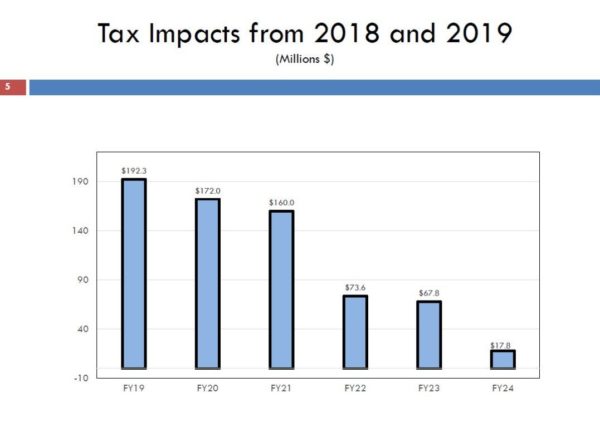 Last week, the Consensus Forecasting Group (CFG), the official body charged with forecasting revenue for the commonwealth, met to determine planning revenue estimates for the current and next four fiscal years. As part of this process, the Office of State Budget Director (OSBD) provided the CFG with information about the cumulative fiscal impact of the tax changes enacted by the General Assembly in 2018 and 2019, and that information is troubling.

The General Assembly passed a significant tax law in 2018 – a large cut in taxes for the top 5% and an increase for everyone else that would provide a short-term revenue bump, but lead to long-term erosion. In 2019, the legislature followed up with two bills originally described as addressing unintended consequences of the 2018 bill, but which morphed at the last minute into significant tax giveaways for a multitude of special interests. The 2019 bills were introduced and passed in one day each with no public hearing or input and no official fiscal impact statements. Information presented last week was the first opportunity to see just how costly the 2019 tax breaks are expected to be when fully phased in.

As illustrated by the OSBD graph and table below, the net positive new revenue from the 2018 and 2019 tax changes combined is $192.3 million in 2019 but projected to fall to only $17.8 million by 2024.  What this means is that in 2019, the General Assembly spent almost all of the new revenues it generated through the tax shift in 2018 – changes that the bottom 95% of Kentuckians, especially low-income families, are paying for – to provide even more tax breaks for special interests. This pattern of spending money on new tax cuts – session after session – instead of plowing those resources into public needs is why Kentucky is unable to adequately invest in schools, child and family services and other important budget priorities. 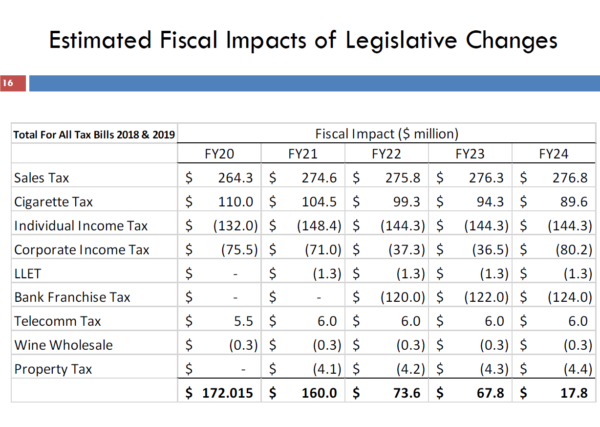 Three of the most expensive new tax breaks enacted in 2019 did not go into effect immediately. They can and should be reconsidered by the 2020 General Assembly in light of the substantial negative fiscal impact they are projected to have.

In addition to these large tax breaks, cigarette tax revenues will decline from the significant bump received in 2018 because of the $0.50 rate increase. Decreasing smoking rates means $20 million less will be collected in 2024 than in 2020.

The planning estimates established by the CFG for the 2020-2022 biennium, which do not include the full negative impacts of the tax cuts described above, project revenue growth in each year of only about 2% – short of what is needed to simply maintain services at the current level. Without making tax changes that truly generate added resources, the next General Assembly will likely not have new funds to address inadequacies in the current budget ranging from money for new textbooks to outdated water systems.