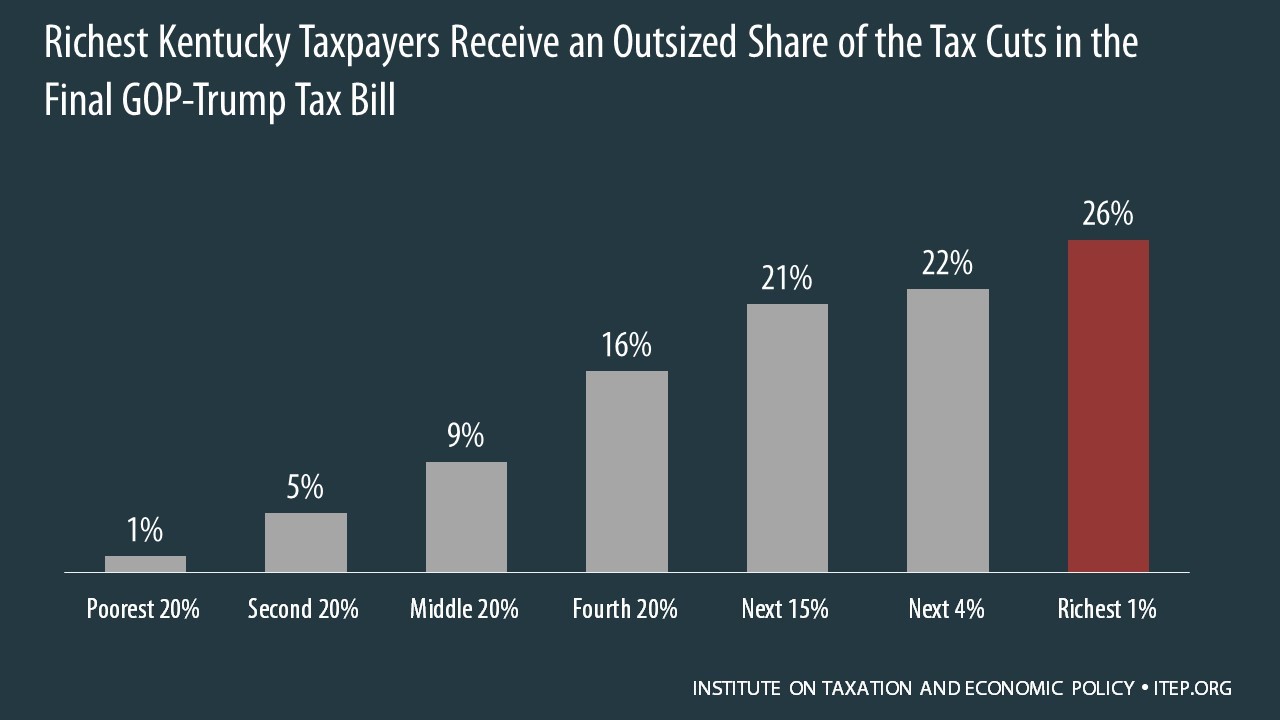 The tax bill Congress passed yesterday was the first in a two-step plan to cut taxes for the wealthy and corporations and pay for them later through cuts to critical investments that help everyday Kentuckians. The final tax bill will increase taxes for middle- and low-income families, end health care for millions and increase federal deficits. Step two of the plan is slated for next year, when lawmakers indicate the increased deficits may be used to justify dangerous cuts to everything from food assistance for families and education to Medicare, Medicaid and infrastructure.

Step One – Tax Cuts for the Wealthy and Corporations

The tax bill Congress sent to President Trump yesterday is grossly regressive and targeted to benefit the ultra wealthy and large corporations, not everyday Kentuckians. In fact, foreign investors will benefit more from the tax bill in 2019 than the bottom 60 percent of Americans combined. Looking at just Kentucky taxpayers in 2019, a hugely disproportionate share of the benefit will go to those at the top: while the wealthiest 1 percent get 26 percent of the total benefit, the bottom 60 percent of Kentuckians cumulatively receive only 15 percent of the total tax cut (see graph below).

By 2027, when most individual tax changes expire except the bill’s slower-growing inflation rate for tax brackets, the bottom 60 percent of Kentuckians will face a tax increase on average while the top 1 percent still receive a tax cut averaging $4,700, thanks to permanent corporate income tax cuts and other changes that primarily benefit the wealthy. 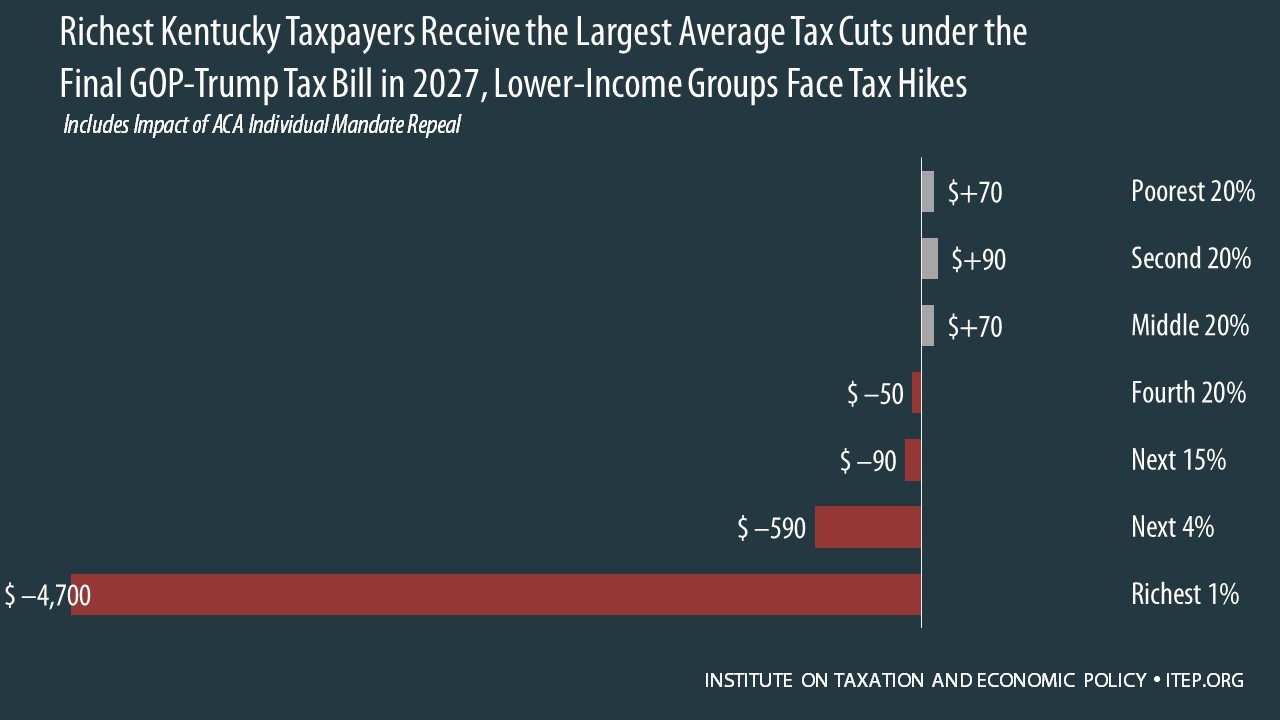 The tax cut package will worsen income inequality in the U.S. economy. The bill also ends the individual mandate in the Affordable Care Act, which will lead to 13 million fewer Americans with health coverage, including an estimated 181,000 Kentuckians, and raise premiums for the rest by 10 percent. A separate analysis estimates that, in Kentucky, individual market premiums for a family of four will increase $1,690.

Members of Congress are already talking about cutting programs that assist Kentucky families and communities. As mentioned, this two-step plan is to drive up deficits by $1.5 trillion with tax cuts for the wealthy and corporations and then use higher deficits to justify program cuts mainly affecting low- and middle-income families. A number of Republican leaders have even specifically said that once the tax bill is passed, they will turn to “welfare reform” — or cuts to programs that help families with limited resources afford food, housing, health care and other basic needs. The theory that tax cuts will eventually trickle down and benefit these families is false, and the fact remains that cuts to vital federal investments could cause direct harm to hundreds of thousands of Kentuckians.

Medicaid is a cornerstone of our system of health care coverage, providing access to important preventative services, substance abuse treatment and care for chronic conditions, among other programs. A total of 1.4 million Kentuckians are covered by Medicaid — including seniors, people with disabilities, children and low-income workers. Medicaid also injects millions of federal dollars into every Kentucky community, resulting in jobs for nurses and other care providers among other benefits.

SSI provides income support for individuals who are disabled or elderly and have little income and few assets. It is a lifeline for very low-income families caring for children with severe disabilities — including Down syndrome, cerebral palsy, autism, intellectual disability and blindness. SSI provides financial support to these families that, due to the demands of caring for a child with a disability, face higher costs and more demands on their time. Without SSI, many more Kentuckians with disabilities would be in poverty; the program has been shown to lift half of otherwise poor child beneficiaries out of poverty and reduce deep poverty. As of December 2016, there were 180,613 Kentuckians receiving Supplemental Security Income (SSI) benefits.

The Pell Grant program provides financial assistance for low-income individuals to attend and complete college. By increasing access to education and training for those who would otherwise not be able to afford it, Pell also helps to address poverty. Pell Grant awards are already modest in comparison to the rising costs of college, and cuts would make higher education out of reach for more Kentuckians. In 2017, 102,360 students in Kentucky received a Pell Grant and the state’s postsecondary institutions received $372,576,000 from Pell.

Federal Non-Defense Discretionary (NDD) grants are investments in critical programs that support Kentuckians, and are currently funded at historically low levels. NDD funds in our state go to education programs such as Head Start, assistance for low-income kids and families such as the Child Care and Development Block Grant and provide a wide range of other services to Kentuckians that make our communities safer and healthier and develop the workforce and economy

Here are KCEP’s fact sheets by Congressional District that show how important these federal funds are to individuals and families across the state.