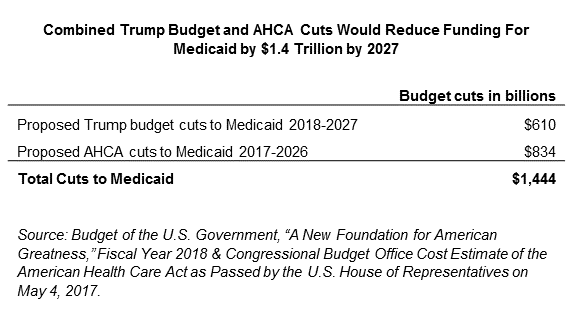 Kentucky’s Medicaid program is potentially facing enormous cuts to federal funding through the American Health Care Act (AHCA) and President Trump’s proposed budget. Nationwide, Medicaid as a whole would undergo a $1.4 trillion combined cut over the next ten years, a 45 percent reduction in funding by 2026 compared to current law. This cut would have the devastating effect of making coverage for low-income Kentuckians much harder to get and use — including children, pregnant women, people with disabilities and seniors.

The Cuts Would Be Made in Different Ways, All Ending Medicaid as We Know It

The proposed cuts in President Trump’s budget would be implemented through giving states the option to receive federal Medicaid funds through either a per capita cap or a block grant. Under a per capita cap, the amount states receive in federal Medicaid funding would be based on the average amount the state spends per enrollee. A block grant is similar, but would pay states an allotment fixed to a base-year’s total spending. In each of these cases, the amount would be incrementally increased each year, but more slowly than inflation in the cost of medical care, squeezing states’ ability to cover medical bills over time.

The AHCA cuts Medicaid in two ways. The first is by effectively ending Medicaid expansion by freezing enrollment and significantly increasing the share of cost that states would be responsible for paying. The second way is through a per capita cap, as explained above. Combined, the cuts laid out in the AHCA would shift $16 billion in Medicaid spending over ten years to Kentucky, an amount the state would be unable to make up through its own budget.

These two funding reductions would be an especially difficult setback for Kentucky because it is one of the 31 states that have expanded Medicaid (and more successfully than most any other state) and because the federal government pays a larger share of Kentucky’s Medicaid program than all but five states. The federal government pays for over 77 percent of Kentucky’s traditional and expanded Medicaid bills combined. 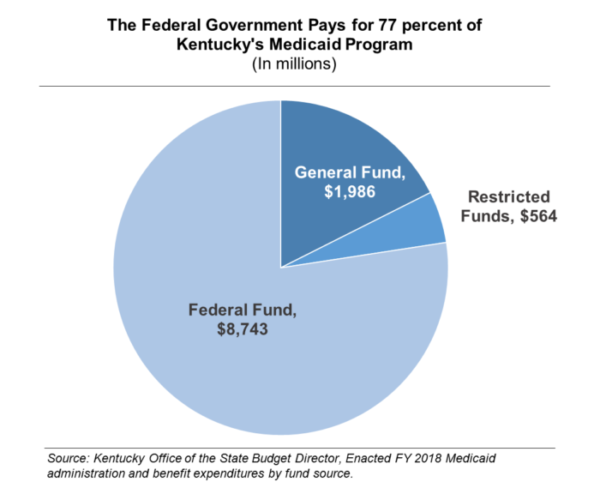 Kentucky has 1.4 million people enrolled in Medicaid, including 472,800 through the Medicaid expansion. If these cuts were signed into law, within just a few years, most if not all of the Medicaid expansion enrollees would lose coverage. Those losing coverage did not qualify under traditional Medicaid’s very narrow criteria in Kentucky and include low-wage workers and the 36,000 veterans who struggle to make ends meet.

For the remaining 939,200 children, pregnant women, people with disabilities and seniors receiving traditional Medicaid, the state would have to roll back the program in one or more of the following ways in order to adjust to such a drastic cut:

Kentucky could be forced to scale back coverage for in-home services for seniors and people with disabilities or services to help fight drug addiction. At real risk are Kentuckians living in rural parts of the commonwealth, women (especially mothers), and the hundreds of thousands of Kentuckians who have been able to get needed care and are on the path toward better health.

The dramatic cuts that result would reverberate throughout Kentucky’s economy. According to one estimate, Kentucky would lose nearly 86,000 jobs, or 2.2 percent of the state’s workforce, from the cuts in the American Health Care Act alone. Over 20,000 of those would occur in eastern Kentucky, a part of the state that continues to lag behind an otherwise recovering economy. The 5th district would see a larger loss of jobs than any other congressional district in the country from the AHCA.

These proposed cuts combine to paint an alarming picture for 3 in 10 Kentuckians who are covered by Medicaid, as well as our economy and state budget. As the Senate now considers how to proceed with the budget proposal and the AHCA, this life-saving program must be protected. Kentucky’s senators should use their considerable influence to do just that.