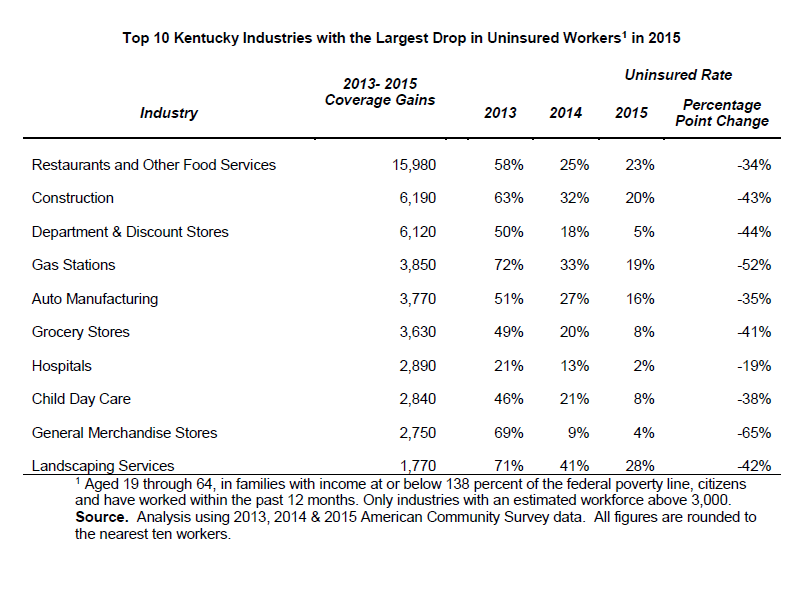 Thousands of Kentuckians who work low wage jobs at restaurants, on construction sites and at retail stores are among those who have gained health insurance because of Kentucky’s decision to expand Medicaid under the Affordable Care Act (ACA), newly-available Census data show. These workers’ access to care is now at risk if the ACA is repealed or Kentucky takes steps backward on the expansion, harming our economy and the health of our state.

Over half of all Medicaid eligible Kentuckians who gained health insurance between 2013 and 2015 held a job, according to American Community Survey data. When you factor in the same low-income Kentuckians who held a job at some point in the past five years that proportion grows to nearly 4 in 5.

The biggest industries where workers have gained coverage are as follows:

Kentucky is a national leader in health coverage gains under the Affordable Care Act. 2 While most of those who are gaining insurance are working, they are in jobs that do not offer them coverage. The share of Kentucky workers who had access to health insurance through their employer has gradually fallen from 70 percent in 1980-1982 to only 53.7 percent in 2011-2013. 3 Medicaid, as well as access to private insurance with the help of tax credits, are helping fill the gaps left by an eroding employer-based insurance system.

Kentucky ranks near the bottom on many health measures, making our decision to expand Medicaid that much more important. Recent studies from the Chan School of Public Health at Harvard show progress: Kentuckians are getting more preventative screenings and care, more care for chronic conditions that otherwise worsen more severely over time and even report having better health.4 Their ability to go to the doctor for regular checkups and when sick means the rest of the state can stay healthier.

Those gains are seriously threatened with the newly-elected president and Congress promising to repeal the Affordable Care Act, which provided for Medicaid to be expanded in the first place. Doing so would result in an estimated 29.8 million fewer Americans having health insurance, and millions more being vulnerable to many of the harmful practices insurers are currently barred from using.5 Also, the recent request to make changes to Kentucky’s Medicaid program puts the state’s gains at risk. With barriers to coverage, reduced benefits and administrative complexity that both adds unnecessary cost and confusion for beneficiaries, much of the progress we’ve seen would start to move backward under such a plan. 6

It’s important that federal and state lawmakers protect the advances we are making in health care for the sake of workers and the entire economy.