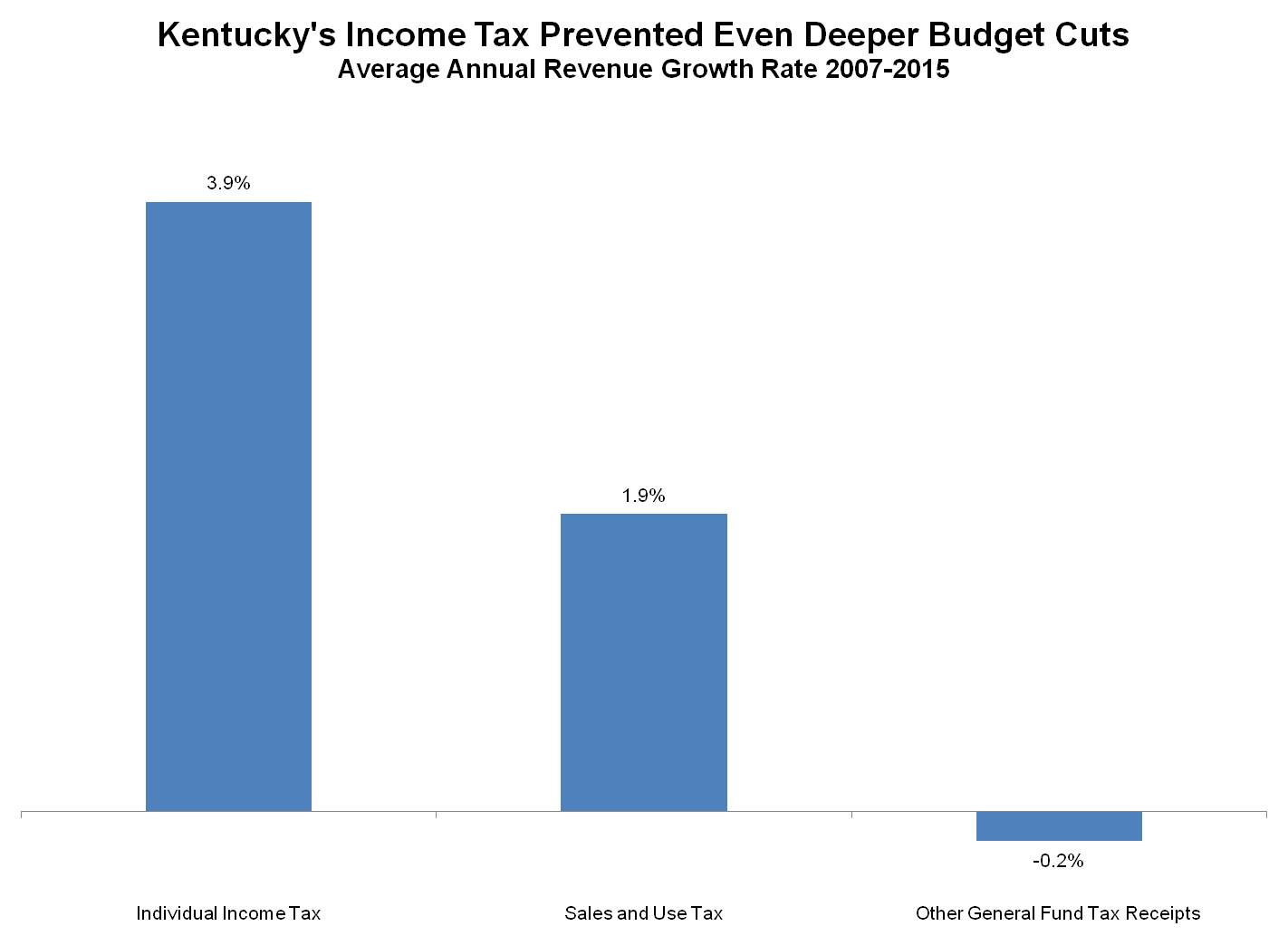 Kentucky ended its budget year with General Fund revenues $165.4 million more than anticipated, equaling growth of 5.3 percent from the year before. The individual income tax is the main source of this bit of good news because of its ability to generate revenue from wealthier individuals whose incomes have soared in recent years.

For the year, individual income tax receipts grew 8.5 percent compared to 2014, meaning all other revenue grew by only 3.2 percent. Sixty-three percent of total net new revenue for the year was from the individual income tax. Income tax receipts were particularly high in April, when the state collected $535 million, or 39.5 percent more, in income taxes than it had the year before. This “April surprise” wasn’t unique to Kentucky, as almost all states with income taxes saw huge growth that month.

In addition to encouraging growth in the Kentucky economy overall, a central explanation for the extra income tax revenues is likely a surge in capital gains taxes, or income taxes paid on growth in the value of assets, like stocks, when they are sold. The stock market was particularly strong during tax year 2014 (which benefits this year’s state budget), with average annual growth in the S&P 500 of 17.5 percent. Also, capital gains taxes were weak last year because of a federal tax law change that encouraged people to sell capital gains at the end of the prior year rather than hold them longer. Weak growth last year made for a lower bar to hop over this year.

Capital gains taxes are disproportionately paid by wealthy people—in Kentucky about two-thirds of capital gains are claimed by those with more than half a million dollars in income. And those same wealthy individuals have seen their incomes rise rapidly in recent years, while others’ wages have sagged. The highest-earning 1 percent of Kentuckians captured 38 percent of state income growth in the first 3 years of recovery from the Great Recession.

This year’s receipts are a reminder of the importance of income taxes in an era of rapidly climbing inequality. In fact, Kentucky should be doing even more to ensure wealthy individuals pay their fair share of taxes. The richest one percent in Kentucky pay only six percent of their income in state and local taxes, compared to nearly 11 percent of income for Kentuckians in the middle.

One of the many reasons for that inequity is that we never tax capital gains made on assets that are held by an individual until death, meaning a loss of about $78 million a year in revenue. And we allow unlimited deductions against individual income taxes no matter how high a person’s income, even while a growing number of states limit deductions and some don’t allow them at all.

If Kentucky was less reliant on income taxes, we would’ve faced more of a budget challenge in this year and previous years. Since 2007, individual income tax revenue has grown by 3.9 percent on average each year compared to 1.9 percent growth in the sales tax and a decrease of 0.2 percent in all other sources (see graph below). Cutting income taxes and moving to a so-called consumption based tax system based more on sales taxes would mean big tax cuts for the rich and less revenue to pay pension liabilities and invest in education, health and other needs. Just ask Kansas. 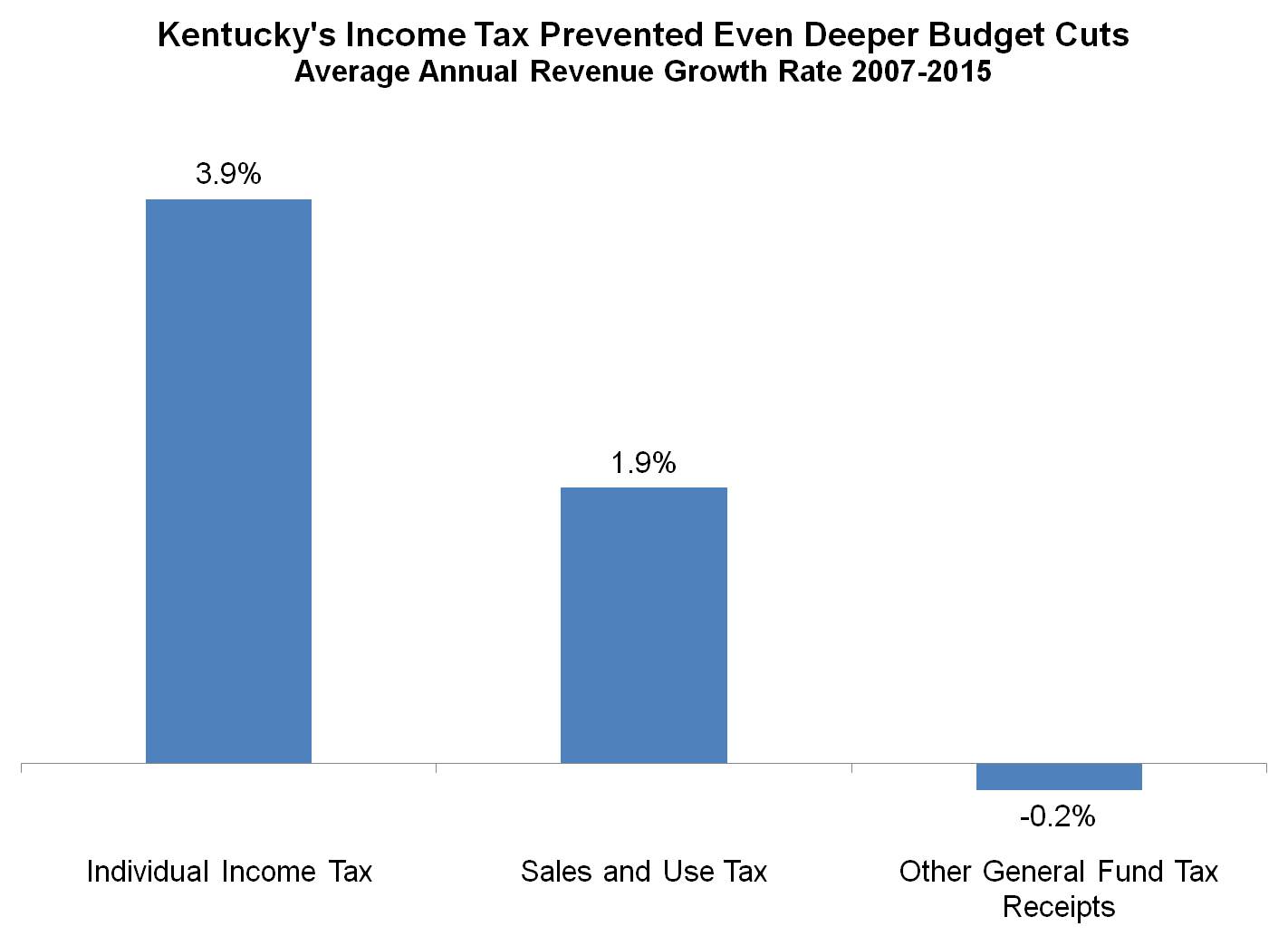 The extra revenue this year is helpful, especially after last year’s $91 million shortfall. But while we dodged another shortfall this year, the fiscal outlook is still bleak. Although the economy is picking up, income taxes aren’t likely to continue growing at such a rapid pace and the stock market is flat so far in 2015. Extra revenues this year will go first toward payments to the SEEK education formula and drug treatment that were added to the budget this session, necessary governmental expenses like natural disasters and the state’s rainy day fund, which contains an amount equal to only 1.4 percent of the budget—far less than the 15 percent that many experts say is needed.

The latest interim forecast projects revenue growth in the first two quarters of next year to be only around 2.7 percent. And the state faces major funding needs, including the necessity of putting more money into its underfunded pension systems and filling funding gaps all across the budget.

Today is a moment of relief in an otherwise troubling picture that will improve only through tax reform that ends exemptions and loopholes to raise more revenue.