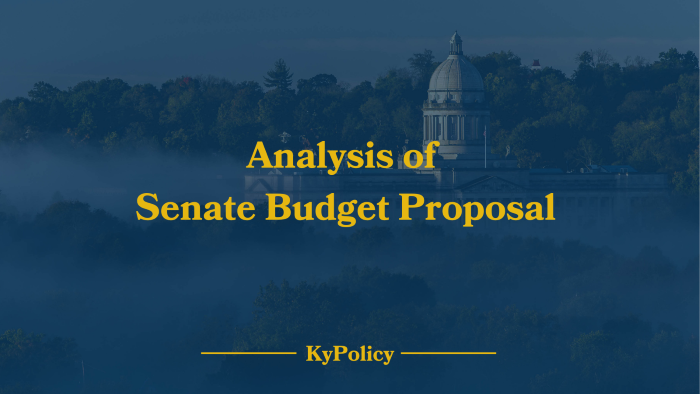 Despite a once-in-a-generation budget surplus, the Senate budget includes $1.3 billion less in spending over the biennium than the already-modest House plan (and $2.8 billion less than the governor had proposed). It contains $311 million less for P-12 education, including not providing funding for full-day Kindergarten and fewer dollars for school transportation costs, and shifts from cash to debt to fund education-related capital construction projects. The Senate does provide larger state employee raises than the House budget, but by putting less money in education makes it even harder than the House budget to provide teacher and school employee raises.

No monies for full-day Kindergarten, and less money for P-12 schools

The Senate budget spends a total of $311 million less on P-12 education over the biennium than the House proposed. While their budget maintains the same SEEK base per-pupil spending of $4,100 per student in 2023 and $4,200 in 2024 as the House, it cuts base funding substantially by not including funding for full-day Kindergarten in the calculation, which began in last year’s budget and is continued in the House proposal. Base SEEK funding is only $1.947 billion in 2024 in the Senate plan compared to $2.098 billion 16 years earlier. That’s a 19% decline in base SEEK funding since 2008 once inflation is taken into account.

The Senate budget also continues to underfund school transportation, which the state is responsible for fully funding under law. The Senate provides only $215 million of the $390 million transportation cost the first year of the budget and $274 million the second, whereas the House put in $274 million in both years. The Senate uses the existing formula to distribute the money based on transportation costs whereas the House allocates a flat amount to each school district, meaning smaller districts are helped more than larger ones.

The Senate budget also has no specific money set aside for badly-needed raises for teachers and school personnel (who are not included in the state employee raise). With even less money for P-12 than in the House budget, adequate raises will be very difficult.

The budget freezes base funding for higher education institutions but puts $80 million more per year into the performance funding pool compared to $50 million more per year in the House proposal. The performance funding model tends to provide little or no money to institutions with more low-income students and students of color. Supported by an increase in lottery revenues, both the Senate and House budgets do include the full statutory funding for college financial aid, a 42% increase in funding for College Access Program need-based scholarships compared to the prior budget. The Senate does not include $20 million for a healthcare workforce initiative and $6.7 million for the workforce development trust fund that were included in the House budget, and includes $5 million for the Center for Applied Energy Research at the University of Kentucky that was not in the House budget.

The Senate spends $1.2 billion less in General Fund monies for capital construction, shifting from using cash for projects to using debt through borrowing. Most of this funding is for state university and community college asset preservation pools as well as top priority construction projects at each institution. The Senate budget also leaves out $156 million for a vocational education center construction pool that was in the House budget. In total, the Senate bonds (borrows) $1.7 billion more than the House had proposed over the biennium, including $140 million more to renovate the state Capitol. By using bonds rather than cash for construction, the Senate shifts more costs to the future.

The budget includes a $4,500 per state employee raise in 2023, or an average raise of 10% compared to the House’s proposed raise of 6%. It is also designed better than the House raise because structuring it as a flat dollar amount makes it a larger percentage raise for lower-paid employees, which are the positions the state is having most difficulty retaining. The budget requires a study of the current salary schedule and indicates that it is the intent of the General Assembly to provide a similarly-sized raise in the 2023 session based on the study, though that raise is not funded at this time. The budget also includes a social worker increment of $4,800 and an intent to give social workers a 10% raise next year based on the above-mentioned study, though dollars are not yet appropriated for that purpose. The Senate did not include $7 million in each year in public defender salary increases that were in the House budget.

More slots for people with disabilities, but less funding in many human services

The Senate budget includes 500 new Michelle P and 200 new Supports for Community Living waiver slots for people with disabilities, compared to 100 each in the House. However, the Senate budget spends $28.8 million less on social workers across the biennium, funding 100 fewer social workers related to prevention services.

The Senate includes increased reimbursements for nursing homes, residential and therapeutic foster care homes, but none for personal care homes. Fewer funds are included for mobile crisis units and the 988 hotline for mental health needs than the House proposed. It also provides $17.7 million less for staffing at local health departments in 2023 than the House plan, and $24 million less for an electronic health record system in the Department for Public Health. The Senate does include $10 million combined in support for child advocacy centers, domestic violence centers and rape crisis centers, while the House includes half that amount.

The Senate, like the House, pays the full actuarially determined pension contributions for state employees and teachers, and both plans include $215 million in extra contributions to the State Police Retirement System. The House had included extra monies beyond those contributions that are not in the Senate plan, including $200 million to the Kentucky Employees Retirement System non-hazardous fund and $142 million more to the Teachers’ Retirement System. The Senate budget includes $22 million less than the House toward the pensions of quasi-governmental organizations like health departments and community mental health centers, which the state is beginning to phase down support of under House Bill (HB) 8 that passed in 2021.

The state has $1.1 billion of ARPA State Fiscal Recovery Fund monies remaining that it can use to respond to the pandemic and negative health and economic impacts, provide bonus pay to essential workers, prevent cuts to public services and/or invest in water, sewer and broadband infrastructure. The Senate plan appropriates $714 million of the remaining funds as follows. Most all of the remaining ARPA monies are spent by the Senate in their version of HB 144, which appropriates $242 million toward the unemployment insurance trust fund to lower business taxes.

Because of the stimulus provided by federal aid, Kentucky goes into this budget with a rainy day fund of $1.5 billion, or 12.4% of annual spending — a larger amount than the state has had in the fund since it was created. The Senate budget adds another $250 million to the rainy day fund.

The muted additional investments in education, human services and other areas described above mean the Senate budget leaves $2.3 billion unspent — even more left on the table than the $1.1 billion the House budget set aside. On top of the amount in the rainy day fund, that means approximately $4 billion will still be left unspent in the Senate budget despite the state’s many needs.

The Senate has already passed Senate Bill (SB) 194, which gives away $1.1 billion of those monies in income tax refunds while leaving out low-income Kentuckians and seniors. It is unclear what the Senate intends to do with the remaining $1.2 billion. Using those monies for permanent tax cuts like the House has proposed would leave a massive hole in the budget moving forward.