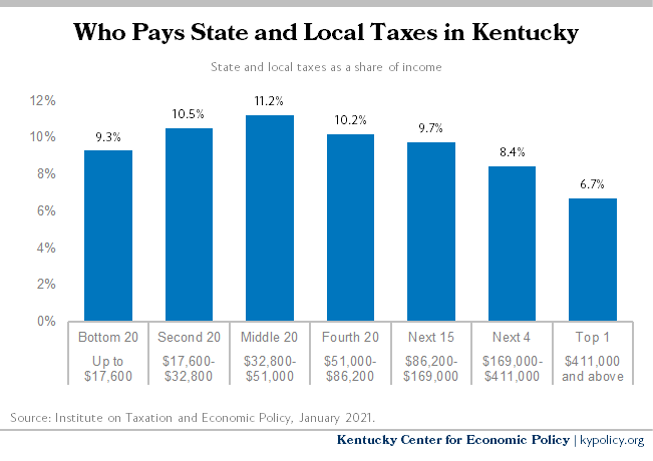 Today the Senate Appropriations and Revenue Committee moved forward a $1.15 billion income tax rebate that will give away a huge portion of the revenue surplus that could otherwise be reinvested in Kentucky’s schools, health, infrastructure and other needs. This rebate is structured in a way that intentionally leaves out low-income workers and most all elderly Kentuckians, and could result in some paying the money back next year.

The Committee Substitute to Senate Bill 194 would provide a rebate of income taxes paid for the 2020 tax year of up to $500 for single people and $1,000 for married couples. Those who paid less than that amount of income taxes or no income taxes at all would receive a smaller rebate or no rebate, respectively.

Because of Kentucky’s tax code, this rebate would thus leave out many low-income working Kentuckians. Starting in 2005, the state eliminated the income tax for people who live below the poverty line based on family size through a tax credit, with the credit phasing out fully for people with incomes up to 133% of the poverty line (an additional temporary tax credit was provided for 2019 and 2020 to people between 100% and 133% of poverty). As shown below, that means a family of four with incomes of up to $26,200 do not pay income taxes, while those with incomes up to $34,846 pay less than the full amount of income taxes owed.

Low-income people are therefore left out entirely or partially from the rebate in SB 194 despite working. For context, a parent of one child who worked full-time, year round at the minimum wage would, at $15,080 in wages, receive no tax rebate at all under the bill. According to the most recent data, approximately 705,000 Kentuckians live below the poverty line and wouldn’t be helped at all by SB 194, and 970,000 Kentuckians live at or below 133% of poverty. SB 194 would especially leave out Black Kentuckians, 24.4% of whom lived below the poverty line compared to 15% of white Kentuckians.

The impact of the sales tax on low-income families is the reason overall taxes for low-income people are higher than for those at the top. Sales taxes take a much bigger share of the family budgets of those struggling to make ends meet, while the sales tax is less significant for high-income people who are able to save much of their income, as shown below.

SB 194 will make worse existing tax inequities for low-income Kentuckians compared to everyone else. The bill was described as a measure to help address inflation, but it leaves out the people harmed by inflation the most — the Kentuckians especially burdened by higher rents, utility bills, food costs and used car prices.

SB 194 also leaves out most all retirees, who do not pay the income tax. Kentucky does not tax Social Security income and exempts the first $31,110 in non-Social Security retirement income. Of Kentucky’s 547,000 retirees, the median non-Social Security income in 2019 was only $12,000, the average income was $20,147 and the income at the 75th percentile was $26,000. These retirees are also hurt by inflation, pay sales and property taxes, and contributed income tax while they were working, but receive nothing from this rebate. Many struggle on a fixed income: Public employee retirees have received no cost of living adjustment (COLA) for years, and teacher retirees do not get Social Security and receive only a 1.5% annual COLA despite high inflation.

Lastly, because of the way the rebate is structured, it may force some low-income Kentuckians to owe taxes next year. SB 194 is designed as an advance tax credit against 2022 taxes based on 2020 taxes paid. Taxable incomes for some laid-off workers were somewhat elevated in 2020 because of supplemental pandemic unemployment payments. If workers make less in 2022 through employment, they will receive the tax rebate this year but may owe that rebate back when they file their 2022 taxes early next year. Some people who retired since 2020 may also owe the rebate back, as will those Kentuckians who had income in 2020 but who are currently facing barriers to work like limited access to child and elder care, or long COVID.

SB 194 is not as big a giveaway to the wealthy as an income tax rate cut. But it is inequitable as it leaves out the poorest Kentuckians and most elderly people, and it is a poor use of $1.15 billion that is needed to reinvest in our schools and other budgetary needs.