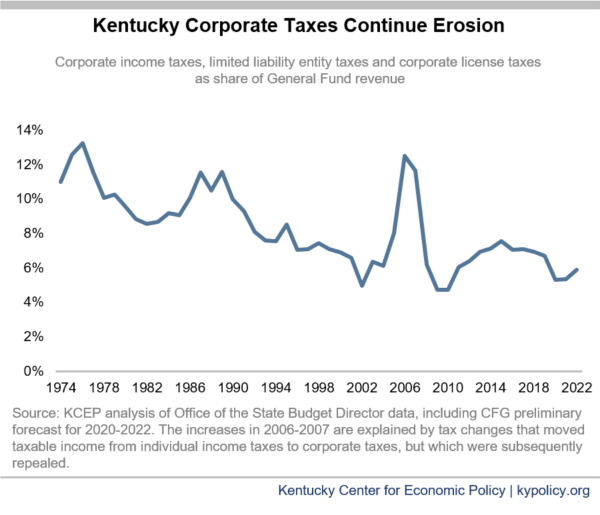 When the General Assembly meets to craft a new state budget starting in January, they will do so with less revenue available from corporations. The reduction in corporate tax revenues expected over the next biennium continues a decades-long trend resulting from growing tax breaks provided by the General Assembly and a failure to close corporate loopholes.

The preliminary estimate from the state’s Consensus Forecasting Group says revenue from the corporate income tax and the related limited liability entity tax will fall to between 5% and 6% of the state’s total General Fund receipts (see graph below). In contrast, corporate tax revenues were routinely more than 10% of what was collected during the 1970s and 1980s.

That decline over the decades means $500 million less a year for Kentucky’s schools, healthcare and other needs. That’s twice as much lost revenue as the entire annual state appropriation to the University of Kentucky ($250 million). And that estimate doesn’t even include other business taxes the state has cut, including the tax on banks eliminated in the 2019 session.

Corporate profits play a role in how much Kentucky collects in corporate taxes from year to year, one cause of the “noisy” ups and downs in the graph above. But the long-term downward trend is explained by state policy decisions. Kentucky raised its top corporate income tax rate to 8.25% in 1990 to help pay for school improvements in the Kentucky Education Reform Act. But it has since lowered the top rate with the most recent reduction coming in 2018, when a graduated structure with a top rate of 6% was reduced to a flat rate of 5%.

The state has expanded its business tax break programs over the years, many of which completely exempt companies from corporate income taxes. Kentucky also eliminated its corporate license tax in 2005. And the state has not taken adequate action to close loopholes that allow large corporations to hide income in tax havens. Corporate taxes were cut further by legislation passed in the 2019 General Assembly: see here, here and here.

Corporate tax cuts are a poor strategy to create jobs. State corporate income taxes are typically less than one quarter of one percent of the cost of doing business, and so play a very minor role in decision making. Location and expansion decisions are driven most often by factors like access to a skilled workforce, proximity to suppliers and markets and quality of infrastructure. More than 80% of job creation is from homegrown firms already in a state or from start-ups (who don’t pay income taxes anyway because they have no profits yet), and only 1-4% from companies re-locating from elsewhere.

Kentucky would be much better off rolling back ineffective business tax incentives, closing loopholes and ensuring corporations pay their fair share, and then plowing that money back into investments in our people and communities that we know pay off.