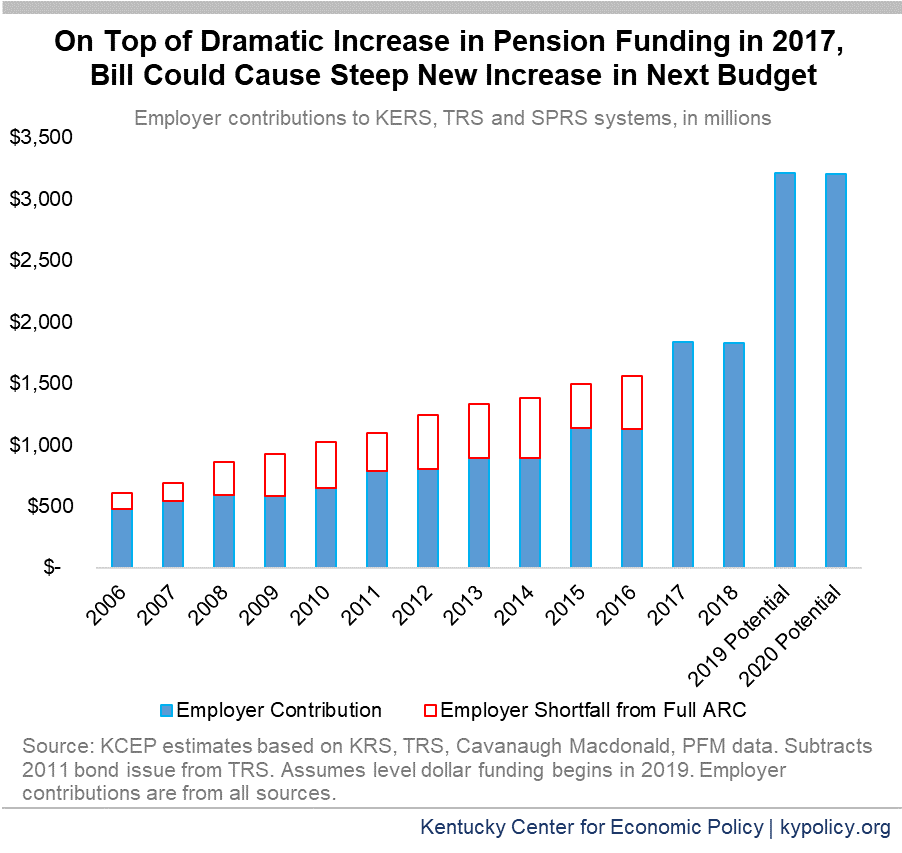 The pension framework under consideration would require Kentucky to make excessive increased payments for pension liabilities in the next state budget — even beyond the huge new contributions the state just made in the current budget. If included in a revised pension bill, this overreaction to past underfunding would set up unprecedented budget cuts a few short months from now — especially if there is no new revenue on the table to make those payments possible.

The additional contributions come largely from shifting to what is called the level dollar method of paying down liabilities, which we describe more here and here. The level dollar approach requires liabilities be paid off with the same dollar contribution each year for 30 years, ignoring how revenue and therefore ability to pay grows on average about 3 percent each year. In combination with a big reduction in investment return assumptions for most of the plans, Kentucky would have by far the most austere approach to funding pension liabilities in the country. The plan will massively front-load the costs of paying down liabilities while asking relatively little of the budget two and three decades from now.

This steep increase in funding comes after Kentucky only just made huge additional contributions to the plans in the current budget that approximately met (or exceeded in some cases) the actuarially required contribution (ARC). As shown in the graph below, plan payments in 2017 were 63 percent higher than they were in 2016. Despite that recent jump, this approach would call for contributions that are approximately 75 percent higher in 2019 than in 2018 — or  185 percent above what we put in just a few years ago.

While it is always better to pay down debt more quickly if monies are available, the state has put forward no plan to generate the needed extra cash beyond legally questionable benefit cuts and an apparently now-abandoned three percent cut to employee wages. Fortunately, these are long-term liabilities owed many decades in the future, for which there is no requirement they be paid down faster, only that they be paid down responsibly.  And all these additional monies aren’t necessary in the short term — the majority of new dollars wouldn’t even go to the poorly-funded Kentucky Employees Retirement System (KERS) non-hazardous plan, but to the teacher’s plan which is now on much stronger footing. The new actuarial valuation for the Teachers’ Retirement System shows its funded ratio climbed from 54.6 percent to 56.4 percent this year thanks to the added contributions in the current budget.

The effect of overly ramping up payments in the next budget will be to increase the funded ratios of the plans several extra percentage points beyond what they would otherwise be. Yet that will come at a cost to other public services which will have to be cut by huge amounts to make room for increased pension funding. While there is a compounding negative effect over time of not contributing extra money to pay down pension liabilities, there is also a large compounding negative effect for our economy and communities of not investing in things like education and health.

Kentucky needs a balanced and measured plan to address the challenge — one that puts targeted extra dollars where they are truly needed in the pension plans, generates new tax revenues to make the payments possible and protects investments in the building blocks of a strong and safe commonwealth.