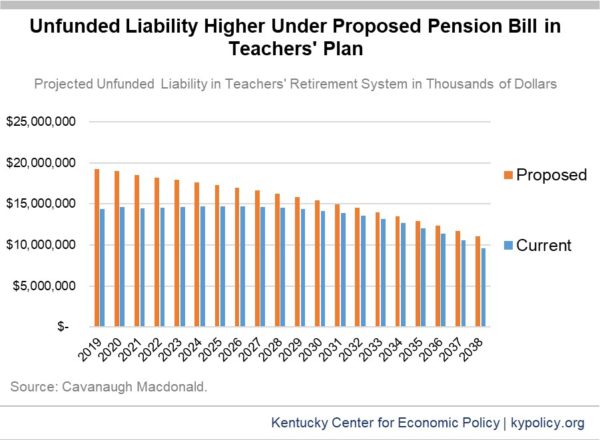 A new analysis of the proposed pension bill by the actuary for the Teachers’ Retirement System (TRS) shows huge new costs to the state from the legislation, including higher costs to pay down the existing unfunded liabilities. In total, the bill adds $4.4 billion in state costs for TRS over the next 20 years, including $645 million in costs in 2020.

There are several reasons for the added costs. First is the switch to the “level dollar” method of paying down pension liabilities, which massively shifts contributions to earlier in the 30-year schedule.

Second, the actuary says the closed defined benefit (DB) plan’s investments will only earn a 6 percent rate of return over time, as opposed to the 7.5 percent the plan would earn if it remained open. The actuary explains “since the DB plan would be closed and retirement patterns altered, leading to a change in cash flow requirements, TRS will need to alter its asset allocation and invest in more conservative options.” That drop in rate of return will require substantially higher employer contributions in the coming decades. The problem of lower returns in closed plans is described in more detail here.

Third, the actuary expects an increase in earlier teacher retirements because of benefit cuts made in the bill.

These big additional state costs are after taking into account any cost reduction from cuts to benefits in the legislation. That includes freezing cost of living adjustments for five years, a change that is of highly questionable legality.

The report also shows if Kentucky simply stays on its current funding path without more benefit cuts, the funded ratio of the plan will climb from 58.1 percent in 2019 to a healthy 80.6 percent in 2038. If the plan is closed, it will have a funded ratio of a smaller 71.3 percent in 2038. In that year, liabilities will be $9.6 billion with an open DB plan but $11 billion if the plan is closed in favor of a defined contribution (DC) plan. See the graph below on how unfunded liabilities are higher under the proposed pension bill than if Kentucky kept its current plan.

After the fifteenth year, the bill would result in lower annual costs, but that is because costs are shifted to earlier years through the level dollar method. Although the actuarial analysis did not look farther ahead, it is important to note that after the thirtieth year, unfunded liabilities are completely paid off under both the current scenario and the proposed bill. Annual costs will then drop steeply. The regular contributions will be the entire cost, and are no cheaper for employers under the new DC plan than the existing DB plan — though the DC plan will lower retirement security and make it much harder to attract and retain a skilled teaching workforce. The employer contribution in the DC plan is 6 percent of teachers’ pay, whereas the employer contribution in the current DB plan (known as the normal cost) is 5.8 percent of pay.