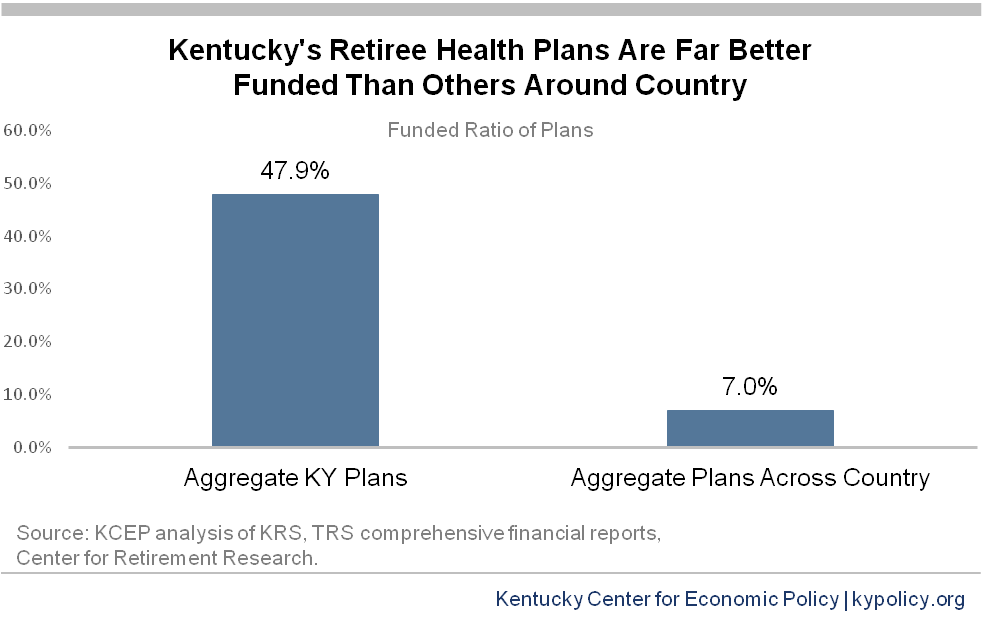 The state’s proposed framework for pension legislation would require public employees to pay three percent more of their salaries toward retiree health benefits, the effect of which is the same as a three percent cut in wages. However, Kentucky’s retiree health plans are much better funded than most similar plans around the country, and the resources available for the plans are growing rapidly without the need for extra contributions from public employees who are already undercompensated.

The new contribution will cut wages by approximately $158 million annually for state workers (including teachers) and another $85 million for local workers — and many of these employees have not received raises for much of the last decade. For a teacher who spends 27 years in the classroom at present-day salaries, the 3 percent contribution would mean the loss of about $40,000 in lifetime income.

In contrast, the Center for Retirement Research reports state and local retiree health plans across the U.S. are only 7 percent funded in the aggregate. And as the state’s consultant PFM noted, Standard and Poor’s recently reported that the median funded ratio for state retiree health plans in 2015 is actually zero percent, because most states have not been pre-funding this obligation. Kentucky has been far more aggressive than most other states in putting monies into its retiree health plans.

Historically, most state and local governments funded retiree health benefits on a pay-as-you-go basis. Kentucky began more deliberately pre-funding its retiree health plans in the last decade, after new accounting rules went into effect that put the unfunded liabilities for these plans on states’ balance sheets. Both the KRS and TRS retiree health plans have experienced rapid growth in their funded ratios since then, as shown in the examples below, and are well on their way to full funding. 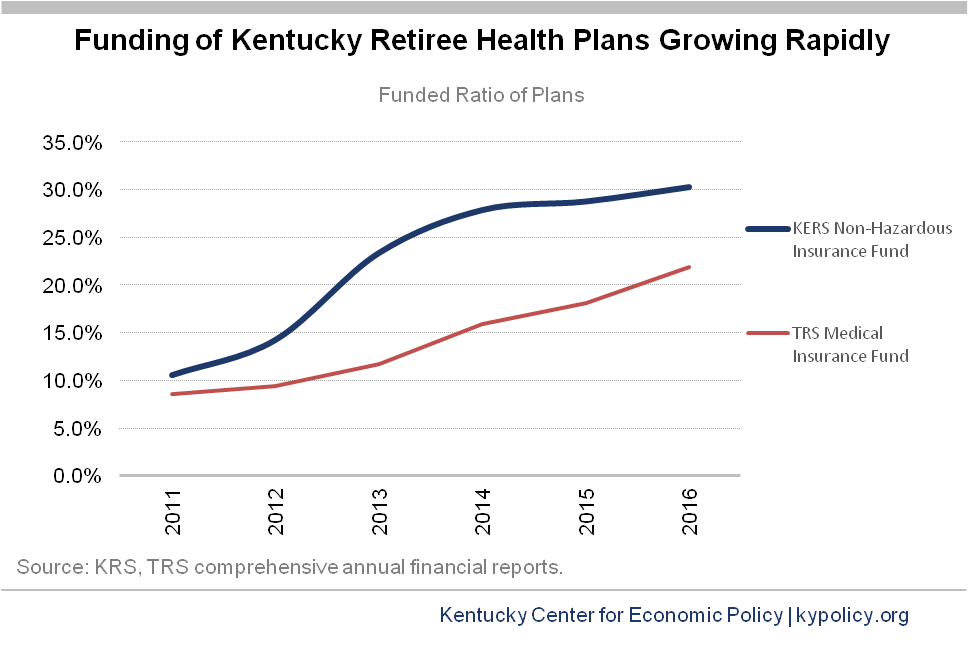 Most states are continuing to operate their retiree health plans on a pay-as-you-go basis, even with the new accounting rules, for a few reasons. First, states are often able to modify these benefits if needed without significant legal barriers as typically exist for pensions. Second, the future of health care is very uncertain, making projections about how much to pre-fund benefits a guessing game. The assumptions actuaries make about the rate of future health care cost growth are unsustainably high for the country’s economy, making it likely big steps will have to be taken to change the nation’s health care system at some point. And there is controversy about whether the current generation should pay for the transition to fully funding past retiree health benefits given states’ other priorities. Kentucky has taken the more conservative route by aggressively pre-funding retiree health benefits; the proposal to further increase funding for these plans by asking employees to chip in three percent more is even more questionable in this context.

Actions taken to strengthen the plans include a law passed by the General Assembly in 2010 requiring teachers to contribute 3.75 percent of their pay toward retiree health benefits with local school boards kicking in an additional 3 percent. The law also required under-65 teacher retirees to pay an amount toward their premium equal to the Medicare Part B premium (currently $134 a month) in addition to paying the same premium current employees pay toward their health coverage.

The state also cut health benefits for KRS retirees hired after 2003. For those retirees, the system only provides a set subsidy to help them pay for premiums rather than a guaranteed payment of the full amount of the premium. The subsidy is $12.99 per month for each year of service for non-hazardous employees, and it grows by just 1.5 percent a year — or substantially below the usual health cost inflation rate. KRS employees hired after 2008 are also required to contribute one percent of their pay toward an account for health benefits in the pension fund.

In addition, the state has increased other out of pocket costs for public retirees’ health care and then extracted the surplus dollars for budgetary needs. The subsidies for teachers and other public retirees are used to purchase insurance for those under the age of 65 through the Kentucky Employees Health Plan, the same plan available to current workers. The state has raided that plan of resources in recent years, including a transfer of $500 million from the Kentucky State Employee’s Health Insurance Trust Fund to the state’s General Fund to help shore up the current two-year budget and put money in a so-called pension permanent fund. The surplus monies accumulated in the health fund because the state shifted more costs to workers and retirees, including through higher deductibles and co-insurance.

Why is a substantial wage cut to pay for benefits that are already on solid footing part of this plan? In the language of the proposed bill we find these additional monies will not go to improving the retiree health funds at all. The bill uses the additional contributions to reduce what the state will need to contribute for pensions in the case of TRS and what the employer will have to contribute for retiree healthcare in the case of KRS.

Here’s how that works. With TRS, the school boards will no longer contribute their current three percent of teachers’ pay for retiree health care, and will instead be required to send that money to the pension plan. That will then reduce what the state would have to otherwise contribute for pensions. And the additional employee contributions for KRS retiree health will reduce what the employer would otherwise have to put into insurance funds, as calculated each year by the system’s actuary.

The proposed three percent employee contribution is another way in which workers are being asked to bear the burden of the state’s obligations without consideration of other options — like cleaning up Kentucky’s plentiful tax breaks to generate the revenues to meet them.