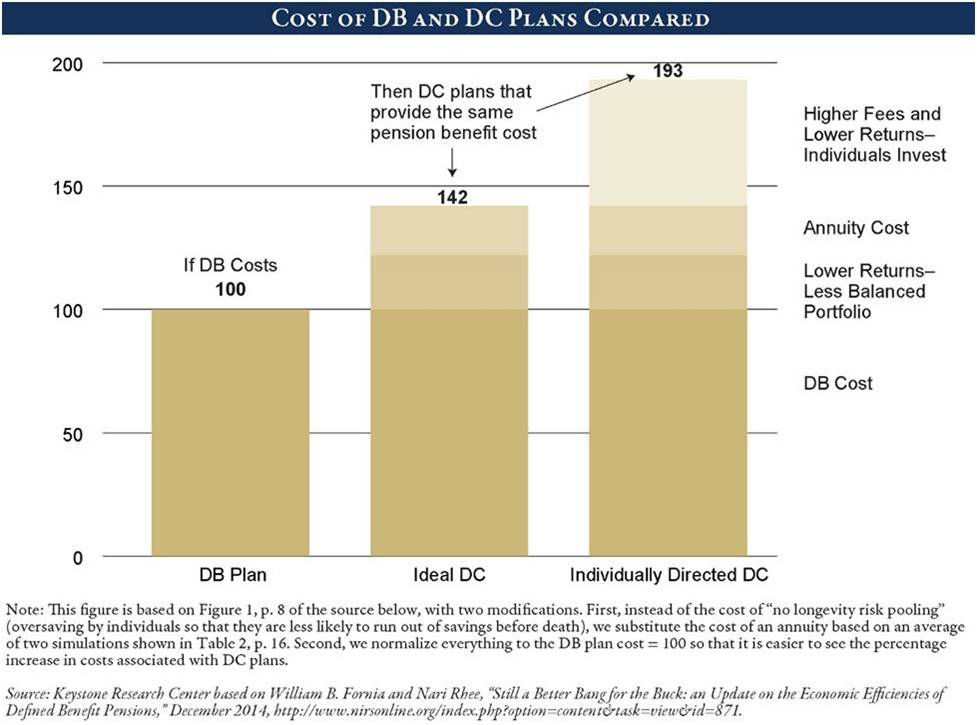 The governor and legislative leaders released a framework today that makes substantial cuts to pension benefits for current workers, new employees and even retired teachers. It includes a shift to a 401k-type defined contribution (DC) system for future employees that is no cheaper than the current pension plan but will reduce retirement security and make it harder to attract and retain a skilled workforce. In addition, the framework calls for big new contributions to the plans without any new tax revenue to make that possible.

Major aspects of the proposal include the following:

Framework cuts benefits for current employees and all teachers

The plan reduces benefits for current non-hazardous workers and teachers by ending their participation in the defined benefit (DB) plan after they reach the years of service for full retirement, or 27 years in most plans. After that point, a still-employed worker would move to a DC plan. This change means a significant cut in benefits for long-serving employees. Among current retirees in the KERS non-hazardous plan, 19 percent put in more than 30 years and 27 percent of teachers retiring in the last decade put in more than 30 years. A DC plan started after an employee’s 27th year would be of little value by the time he or she retired, since there would not be enough time for investment earnings to compound.

For current teachers, the framework would eliminate rules after 2023 for calculating benefits based on final 3 years of salary rather than 5 for those working more than 30 years and that allow use of accumulated sick leave toward the final salary computation.

Although today’s press conference indicated that retirees are protected from cuts, in fact the plan suspends cost of living adjustments (COLAs) for retired teacher pension benefits for 5 years (teachers receive a COLA of 1.5 percent per year in recognition that they are not in Social Security, which has a COLA). That amounts to a 7.2 percent cumulative cut in pension checks from what retirees would otherwise receive. Also, teachers in the future will not receive COLAs until they are retired for five years.

In addition, all current and future employees (including teachers) would be required to contribute three percent more of their salary toward retiree health benefits, amounting to a three percent wage cut.

The framework also moves new state and local employees and teachers (with the exception of hazardous duty employees) into DC plans. It converts non-hazardous employees hired since 2013 to DC.

The shift of new teachers into a DC plan will happen without also moving them into Social Security. Under the proposal, teachers would increase their pension contribution from 9.105 percent of pay currently to as much as 12 percent (9 percent required) toward their DC plan. The state would reduce its contribution from 5.84 percent under the current DB plan to only 4 percent toward the DC plan, and would require school districts to pick up 2 percent of pay.

For roughly the same amount of upfront cost from the employer, teachers would receive a significantly inferior benefit. As the graph below shows, it costs between 42 and 93 percent more to provide the same benefit through a DC plan as through a DB plan. DC plans earn lower investment returns and do not provide workers protection against running out of money before they die. Future Kentucky teachers will be among the few Americans without the security of any kind of DB benefit (since Social Security is a type of DB plan). The framework does not provide details on the DC plan for non-hazardous employees, but the current cash balance plan for those workers is slightly less expensive than the DC design the consultant PFM proposed.

The framework also includes shifting to a so-called level dollar method of funding pension liabilities. This change will massively front-load costs of paying down benefits, adding substantial new burdens to budgets over the next 10 years or so while asking relatively little of budgets further down the road. PFM put the state General Fund price tag for that change at $1 billion in 2019. The framework makes no mention of lessening that burden on the next budget. The governor described a possible four-year phase-in of level dollar contributions in the press conference, but that may be only for local governments.

Regardless of when that new contribution kicks in, the state does not have the extra resources to make the additional payment. There is no actuarial analysis yet of any immediate cost reductions from the proposed framework, but they can only come from the cuts to retirees and current employees mentioned above (since the proposed benefit for new employees is no cheaper than their current plan). Those changes to current workers and retirees break promises and are of highly questionable legality.

There will also be added costs in the future associated with shutting down the DB plans. Closed plans are no longer balanced by workers of different ages, and so must invest more conservatively. That will lead to lower returns over the many decades it will take until the last check in the closed DB plan goes out.

And the framework includes nothing that generates new tax revenue, meaning any new contributions to the systems now and in the future will have to come from cuts to the rest of the budget. The governor has already called for contingency plans of 17.4 percent cuts to many agencies and programs in 2018, and we are likely to see major new cuts in the next 2-year budget if a framework like this moves forward without new resources on the table.