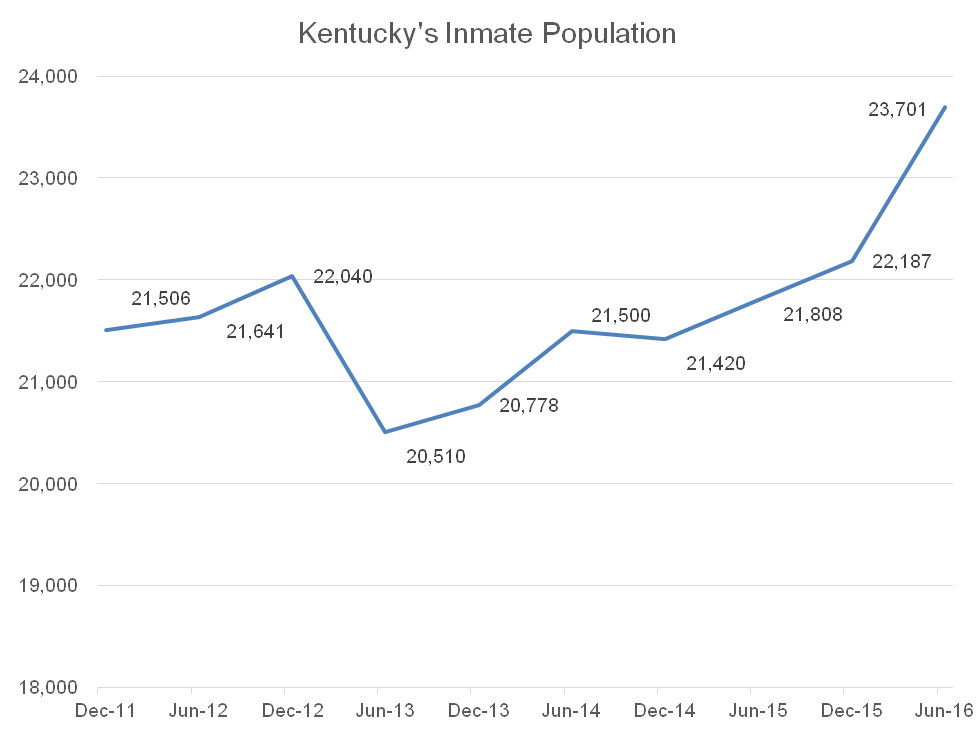 The impact of Kentucky’s 2011 criminal justice reforms on the state’s inmate population and budget have been much less than what was projected when Kentucky enacted HB 463, or the “Public Safety and Offender Accountability Act.” In fact, the state’s inmate population is now higher than it was in 2011, and the rate of inmates returning to prison after release — “recidivism” — is on the rise. However, new Department of Corrections (DOC) data shows that there have been some successes with HB 463, which should be built on with additional criminal justice reforms in 2017.

According to the DOC’s presentation at the most recent Criminal Justice Policy Assessment Council (CJPAC) meeting, HB 463 has resulted in fewer inmates than would otherwise be the case, some savings to the state and better access to substance abuse treatment and programs that help reduce recidivism.

HB 463 instituted a Mandatory Reentry Supervision policy requiring every inmate to undergo a period of supervision by probation and parole staff after release. This component was included in HB 463 based on research showing the period immediately after release from prison is critical in reducing recidivism. Inmates not granted parole are either released under supervision six months prior to the end of their sentences or serve an additional year of supervision after the end of their prison term. According to the DOC, as of June 2016 Mandatory Reentry Supervision has resulted in cost savings of more than $81 million because of the shortened length of sentences resulting from the policy.

As a result, as seen in the graph below, a smaller share of drug convictions are tagged with Persistent Felony Offender (PFO) sentence enhancement, which increases the charge and associated sentence for those who have previously been in the criminal justice system; for instance, with a PFO 2nd Degree sentence enhancement for a Class D felony (a 1 to 5 year sentence) the charge becomes a Class C felony (5 to 10 year sentence). 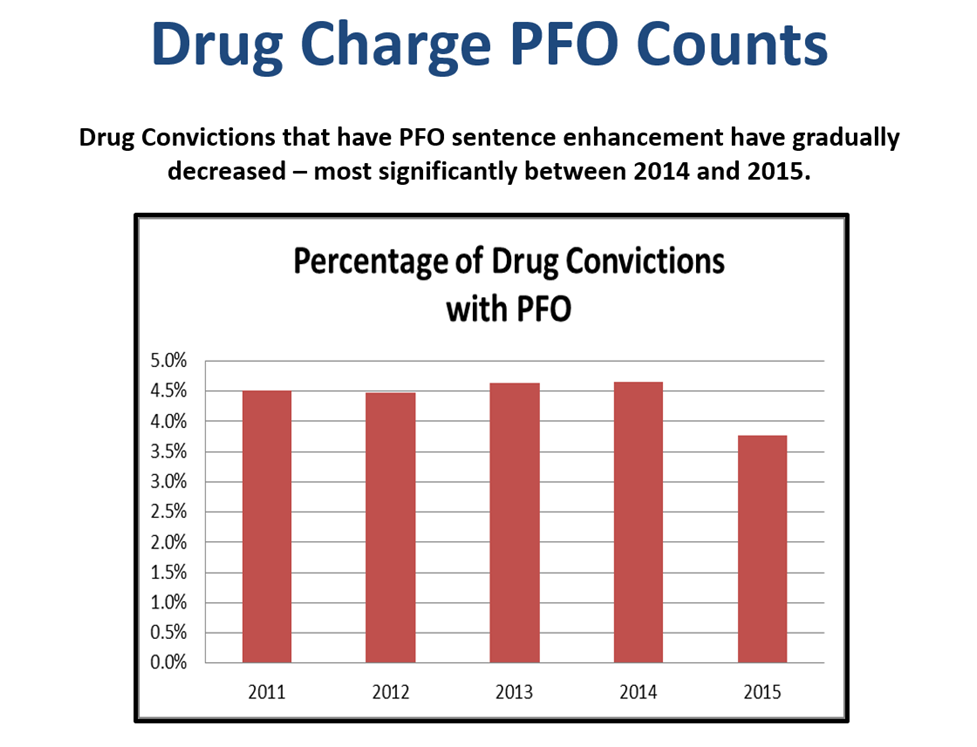 According to the DOC, the overall sentence length of drug convictions has decreased an average of about 400 days since before HB 463, as seen in the graph below. 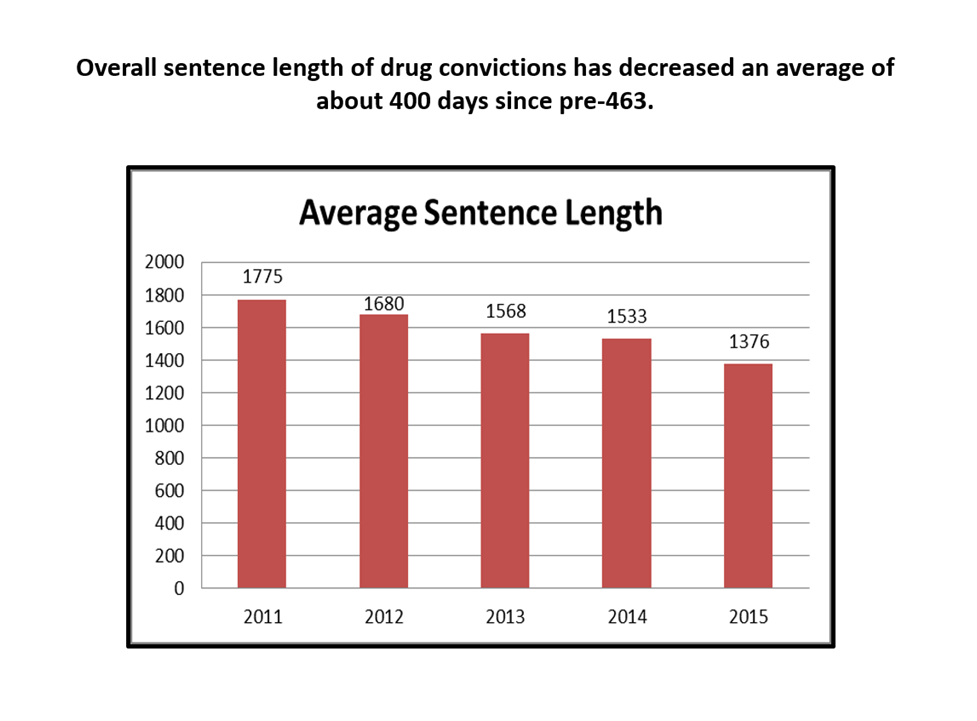 2011’s reforms also made changes so that fewer Kentuckians on probation or parole would be sent to jail or back to prison for minor, technical violations such as missing an appointment with a probation/parole officer or missing curfew. A system of accountability measures, corrective actions and programs is in place prior to probation or parole being revoked — such as more intensive supervision, community service, random drug testing or a short amount of time in jail. HB 463 has increased the use of such graduated sanctions, but much more is needed.

While HB 463 required the DOC to put in place a system of graduated sanctions, it did not require that this system be followed. As noted by the Department of Public Advocacy, “A court that does not agree with graduated sanctions could revoke at the first opportunity despite the recommendation of a lesser sanction by a probation officer.” And these graduated sanctions are often not being followed. According to a presentation by Pew Charitable Trusts at the CJPAC meeting, two-thirds of prison admissions are the result of supervision violations, as seen in a slide from this presentation shown below. 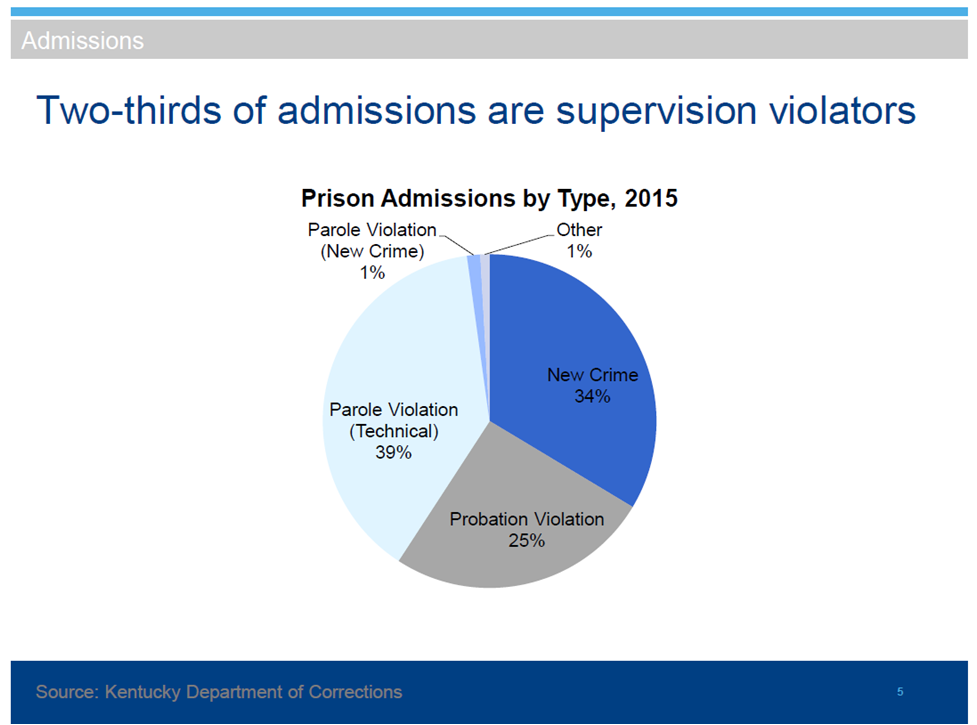 Another important change made by HB 463 was expanded access to substance abuse treatment during and after incarceration. The 2015 Kentucky Treatment Outcomes Study (CJKTOS) reports that the number of corrections-based substance abuse treatment slots (in jails, prisons and in the community) went from 2,289 in 2011 to 3,563 in 2015. According to the DOC’s presentation at the most recent CJPAC meeting, HB 463 has established 1,400 Community Substance Abuse Program beds, enabling treatment to be completed out of jail or prison.

With HB 463, the focus of DOC programming shifted to treatment and intervention approaches that have been shown to be effective in reducing recidivism. Kentucky DOC data shows that inmates participating in these “evidence-based programs” such as adult education, vocational training, substance abuse treatment and behavioral change programs — and particularly those that completed them — are indeed less likely to recidivate.

The new DOC data on the impact of HB 463 shows it resulted in some improvements in the state’s criminal justice system, without which the inmate population would be even higher. However, the data on the prison population and recidivism rates point to the need for additional reforms — for instance, Representative Yonts’s proposed legislation that would address the state’s low parole rates and also make it more difficult for probation and parole  to be revoked, among other changes. Additional important reform options can be found here.