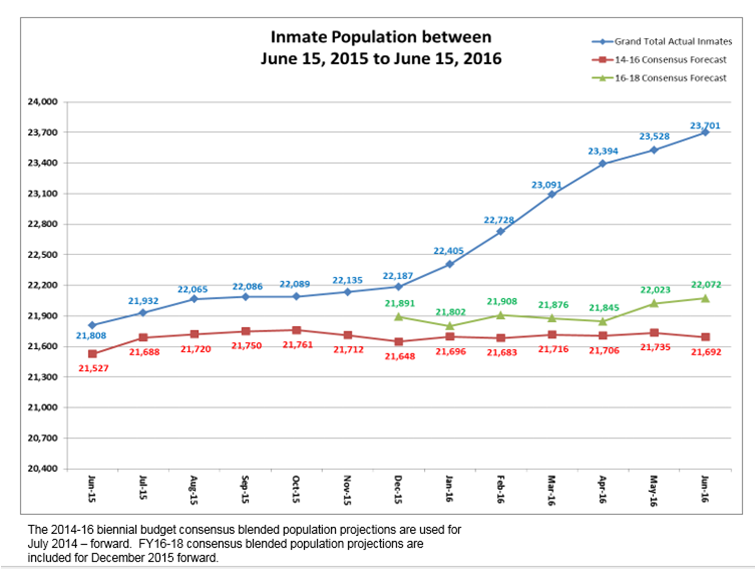 The governor’s announcement today about the formation of a Criminal Justice Policy Assessment Council to work toward needed reforms is an important step in addressing a serious problem in our state. The latest data from the Department of Corrections (DOC) shows Kentucky’s inmate population has been rising rapidly, far above the state’s projections. Without additional criminal justice reforms, the number of incarcerated Kentuckians will likely continue to increase, costing the state money needed for other vital public investments and harming Kentucky families without improving public safety.

Among the major factors contributing to Kentucky’s persistently high inmate population are low parole rates and long sentences resulting from the state’s mandatory minimum laws — for instance, from the state’s Persistent Felony Offender (PFO) law, which significantly increases the sentence of someone who commits any felony (including writing a bad check, failure to pay child support for a period of time, theft over $500) who already has at least one prior felony.

The sharp increase between December 2015 and June 2016 shown in the graph above is mostly due to a decrease in parole rates. According to the Department of Public Advocacy, from July 2015 to April 2016, the average parole rate dropped from around 60 percent to around 40 percent of those eligible. A 20 percentage point drop means around 2,400 inmates that would have been paroled in a year remain in prison.

Many of those individuals who are denied parole are low risk offenders. For instance, in April 2016, 63 percent of inmates deemed “low risk” were denied parole and 60 percent of those considered to be “low moderate risk” were denied. Among other reforms, HB 412 in the 2016 General Assembly (which did not pass) would have made parole automatic for non-violent offenders serving sentences for the lowest level felony (Class D) after serving 15 percent or 2 months of the original sentence — whichever is longer.

The need for criminal justice reform is felt at the state, individual and family levels. Kentucky’s state corrections spending went from $140 million in 1990 to $440 million in 2010 — an increase of 214 percent — making it one of the nation’s fastest growing prison populations during this decade. The state’s corrections budget is now over $500 million, despite the passage of 2011’s Public Safety and Offender Accountability Act (HB 463). There are of course significant costs to peoples’ lives as well, with Kentuckians serving time in prison who could safely return to their families and communities. Around 135,000 Kentucky children (or 13 percent) have had a parent incarcerated, the largest share among states.

The creation of a new council will mean much-needed further discussion of this issue. Hopefully that will lead to positive criminal justice reform in 2017 that will reduce the state’s inmate population and create savings in the budget while maintaining public safety. HB 412 proposed some important reforms — including establishing presumptive parole for some non-violent Class D felonies, creating a gross misdemeanor level of offense to reclassify some low-level felonies, and allowing discretionary rather than mandatory sentence enhancements for some repeat offenders — and there are other reforms that could help to make an even greater impact. Penal code reform in 2017 could include additional methods for low and moderate risk inmates to earn parole and further reforms to the PFO law, among other proposals.