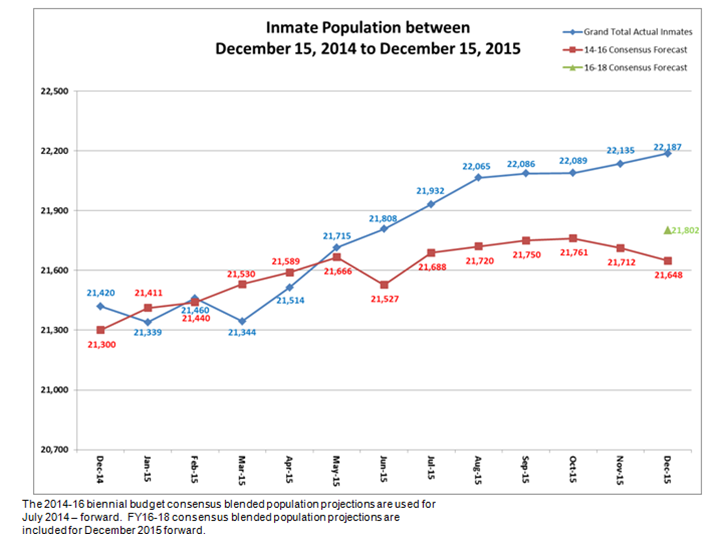 While our state has taken some important steps in passing criminal justice reform legislation in 2011, additional reforms are needed. HB 412, a bill sponsored by Representative Yonts, would further the legacy of 2011’s Public Safety and Offender Accountability Act (HB 463) by reducing time spent in jail/prison for certain non-violent offenses, increasing economic opportunities for some offenders and saving the state money. Kentucky is in particular need of additional reform measures given the increases in the inmate population, as shown in the graph below, and associated spending that has been above what was projected.

A January 2014 estimate said that HB 463 had resulted in a total savings of $34.3 million; however, the state’s inmate population has been increasing fairly steadily since mid-2013 and is now back to 2011 levels. The additional cost to the state in necessary governmental expenses for the inmate population being above projections was $72.8 million between 2012 and 2015.

HB 412 would save the state money and help more Kentuckians who have made mistakes in the past get their lives back on track by reducing time in jail/prison. The bill would do that by:

Several bills this session are proposing increased penalties for drug offenses — including one to reverse sentencing reforms from 2011 that created a new definition of heroin trafficking in order to differentiate true trafficking from addicts who may share drugs and undo measures from comprehensive anti-heroin legislation passed just last year. Such legislation would send Kentucky in the wrong direction, eroding the state’s prior criminal justice reform efforts and increasing state corrections costs. In addition, harsher sentences for drug offenses have been shown not to be effective in addressing illegal drug problems or increasing public safety.

HB 412, however, would help make progress toward the goals of HB 463 — reducing the state’s inmate population and creating savings in the budget.