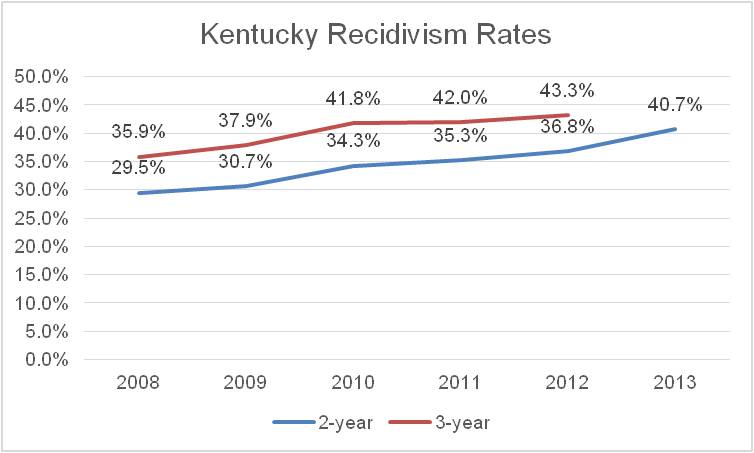 Policy discussions around the need for criminal justice reform like those happening in our state right now often feature the term “recidivism.” While the concept is central to this topic, it’s a somewhat wonky term that may be useful to unpack. So what is recidivism? And what can be done to reduce it in Kentucky?

What can be done to reduce recidivism?

Kentucky’s high recidivism rates contribute to its growing inmate population. Although the state has made some important steps toward reducing inmates’ likelihood of returning to prison there is more that can be done.

2011’s HB 463 – or the Public Safety and Offender Accountability Act — included some important provisions such as requiring the state’s criminal justice system to implement treatment and intervention programs as well as supervision policies and procedures shown to help reduce recidivism. In addition, the passage of felony expungement legislation during the 2016 General Assembly provided some Kentuckians who were previously convicted of a nonviolent felony offense with a better chance of getting a job, decreasing their likelihood of recidivism as a felony conviction can be a significant barrier to employment.

There are many policies and actions that can help reduce recidivism. Here are a handful of ideas, some of which are being discussed at meetings of the state’s recently formed Criminal Justice Policy Assessment Council (CJPAC):

Improving job options: A key way to keep former inmates from returning to prison is to improve their chances of getting a good job that will enable them to support themselves and their families.

Increasing educational attainment is often an important step toward greater employability and is associated with a decreased likelihood of recidivating. While access to adult education in prison is now better than what was described in our previous report, there are challenges with a new, more rigorous GED exam. There are certain aspects of GED credential attainment that are now especially difficult for those who are incarcerated — for instance, having to do with the computer-based aspect of the test. In addition, state budget cuts to adult education also can make it hard for the state to increase or even maintain access to adult education outside of prison, including for those who were formerly incarcerated. Access to postsecondary education for inmates and those in the reentry process also continues to be limited due to declining college affordability in our state. Greater investments in these areas could help to reduce recidivism.

Job training is another way to promote employment during reentry. As discussed in the July CJPAC meeting, Kentucky’s Labor Cabinet is relaunching an apprenticeship program in the state’s prisons.

Ensuring that those released on probation don’t return for minor technical violations: HB 463 included graduated sanctions for those who commit technical, non-violent violations of parole — rather than automatically reincarcerating a parolee for a minor violation. However, these graduated sanctions are frequently not being followed, and too many people are being sent back to prison for relatively minor infractions. The state could require courts to first consider graduated sanctions when considering revoking parole and to have clear and convincing evidence for revocation.

Reforming some sentencing policies: As emphasized in a presentation at the first CJPAC meeting in June, time in prison can actually result in an increased likelihood to commit crimes when released. There is evidence that imprisonment does not reduce the likelihood of reoffending more than other alternative sanctions, is likely “crime generating,” and low-risk offenders are most likely to experience the increase in recidivism associated with the negative impact of incarceration. Some common sense sentencing reforms are described here.

Increasing access to felony expungement: The passage of felony expungement legislation this year is an important policy change in Kentucky that can help those who commit crimes to get their lives back on track. At the same time, there are a few revisions to the law that could greatly increase the number of Kentuckians who are able to apply. Currently the fee required to complete the felony expungement process is $500, which is higher than all but one other state’s; reducing the fee would make expungement possible for more Kentuckians. In addition, the list of eligible felonies could be expanded to include several common charges — including bail jumping, fraudulent use of a credit card and low level drug trafficking charges. Making a felony eligible for expungement does not mean expungement would necessarily be granted as a court ultimately reviews each case and determines if expungement is appropriate or whether the felon’s record should stand.