The Bevin administration has submitted the revised version of its request to make changes to Kentucky’s Medicaid program and continues to tout the plan’s savings. However, projected state savings are only from covering fewer people, and those savings are small and don’t primarily come from the Medicaid expansion population, which is the portion of Medicaid the administration says we cannot afford. What’s more, savings diminish once the costs of a less-healthy population, the economic losses from fewer federal dollars into the state and higher administrative costs to operate the new program are taken into account.

According to the waiver document, savings would come from people failing to comply with work requirements, the removal of benefits (like transportation and retroactive coverage), moving people onto employer sponsored insurance, the introduction of premiums and other changes. But state savings are only a small fraction of total savings because the costs of Medicaid are primarily paid by the federal government. Here is a summary of the waiver’s fiscal projections:

The projected state savings average $66.3 million annually over the 5 years of the demonstration waiver. To put the savings in context, in 2018 the state will pay nearly $2 billion in General Fund monies on Medicaid administration and benefits, making the waiver’s projected savings for that year only 1.8 percent of costs. Over the five year period, the savings are only about 0.6 percent of the entire state General Fund budget.

The waiver proposal lays out how many people it expects to cover over the course of the five years. By the 5th year, 87,639 fewer expansion and non-expansion eligible adults will be covered through Medicaid under the waiver compared to without it (document uses member months, and estimates below translates that to number of members by dividing by 12).

Even though a larger number of people lose coverage in the expansion population, more of the projected state savings come from the traditionally eligible Medicaid enrollees, or “non-expansion adults,” as the plan puts it (see below). Kentucky is projected to save a greater amount from the decrease in traditionally-eligible enrollees because the state pays a higher portion of their coverage, nearly 30 percent as opposed to 7.6 percent on average for the expansion population during the 5-year waiver period.

So although the administration says we must make the changes in the waiver because we cannot afford Medicaid expansion, more of the projected savings come from covering fewer people in the traditional population, who are even poorer than the expansion group (some savings are also projected in coverage for children). 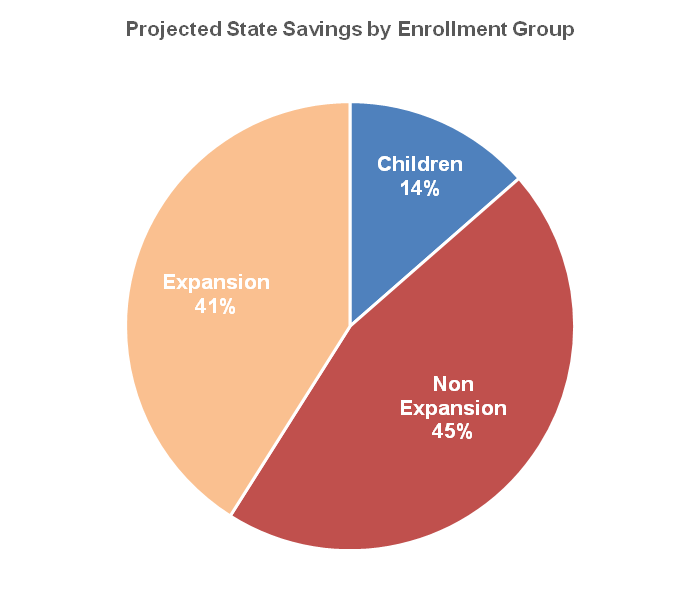 As we’ve pointed out before, many new elements of the waiver will require the state to create complex and costly administrative systems. These include:

The waiver document’s projected savings make no mention of added administrative costs these elements will create. In other states like Virginia and Arizona the costs associated with collecting premiums were higher than the revenue premiums would create, leading both states to abandon that measure. Some of the projected average savings of $66.3 million per year would be eaten up in paying for staff, infrastructure and contractors relating to these new requirements.

When the original decision around whether or not to expand Medicaid coverage was being made, research was done on its possible effects on employment, economic activity and state revenue. No such study was done on the proposed new changes to Medicaid in the waiver. However, evidence shows that these changes would hurt Kentucky in several ways:

In terms of the Kentucky budget’s current bottom line, Medicaid expansion is a good deal. According to projections from Kentucky’s Cabinet for Health and Family Services, we will save more from the current program than we spend the first year of the new two-year budget, and in the second year we will spend very little in net new costs. 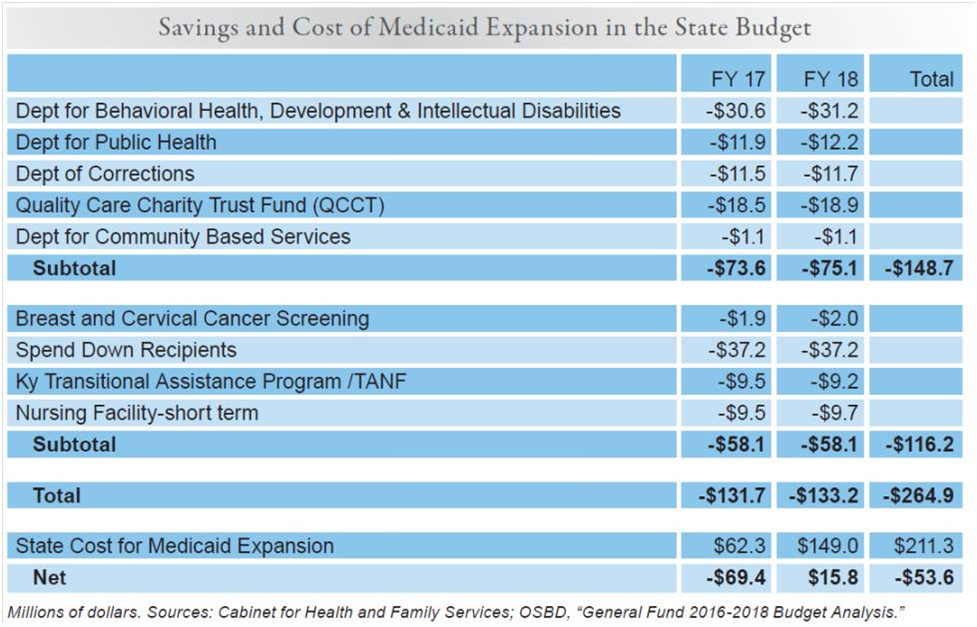 Before expansion, the state was spending General Fund dollars on the public health, mental health, substance abuse, indigent care and other programs in the table above but because of expansion more of these services are covered by Medicaid with the federal government picking up most or all of the costs. With the waiver plan resulting in drops in enrollment, some of these financial benefits will decline with more of the burden shifting back to the state.