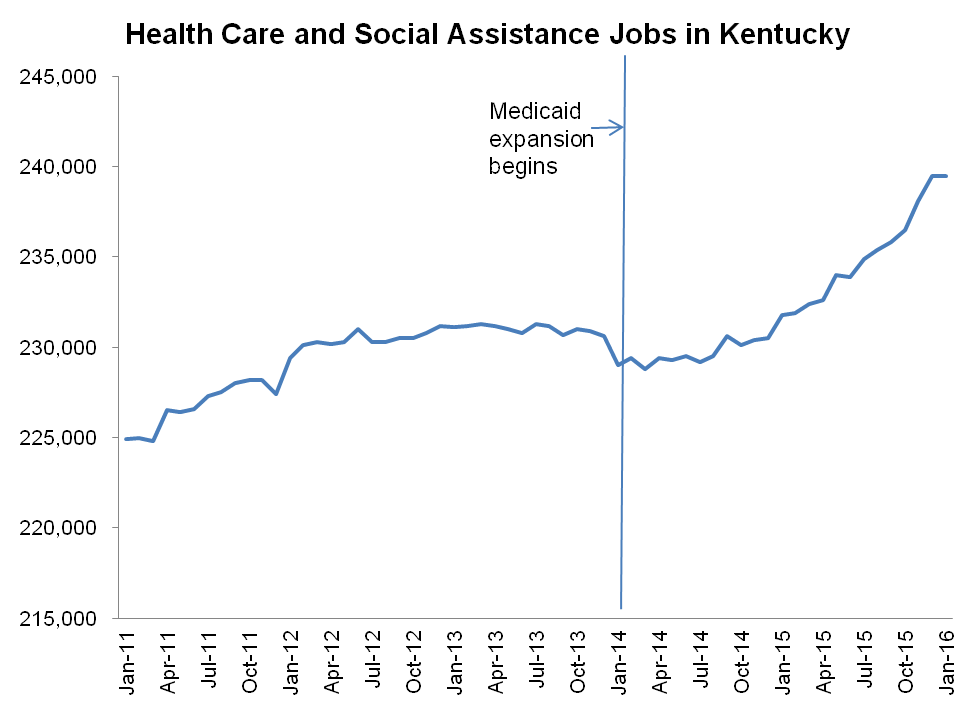 After modest growth in health care and social assistance jobs during the first year of Medicaid expansion, growth picked up at a rapid pace in 2015, according to newly-revised Bureau of Labor Statistics data. The billions of additional federal dollars coming in to the state to provide care for the newly insured likely played a role.

As shown in the graph below, jobs in the sector were tapering off before the state began signing people up for Medicaid expansion. Hospital employment declined (in Kentucky and nationally) as that industry reorganized and was impacted by cuts in reimbursement rates and other factors.

However, by Fall 2014 job growth in Kentucky’s health care and social assistance sector began improving and jobs increased dramatically in 2015. A total of 10,500 more people work in the industry in January 2016 than in January 2014, when Medicaid expansion began. Growth in ambulatory health care services (doctors’ offices and other outpatient care) continues and hospital employment has rebounded adding 2,300 jobs over the last year.

There are other factors influencing job growth in this sector, both positively and negatively, besides Medicaid expansion, and these numbers are subject to further revision. But there’s no question the $2.9 billion that has flowed to providers as of October 2015 is an economic boost. Uncompensated care costs are way down and more people are utilizing preventive health services.

The Medicaid expansion has meant health insurance for 428,000 Kentuckians, making Kentucky a national leader in health coverage gains. The expansion saves money in the state budget previously spent on indigent care, public health, mental health and substance abuse. An added bonus is the much-needed jobs in Kentucky communities from the injection of federal dollars — and the resulting tax revenue — that help make expansion an even better deal.