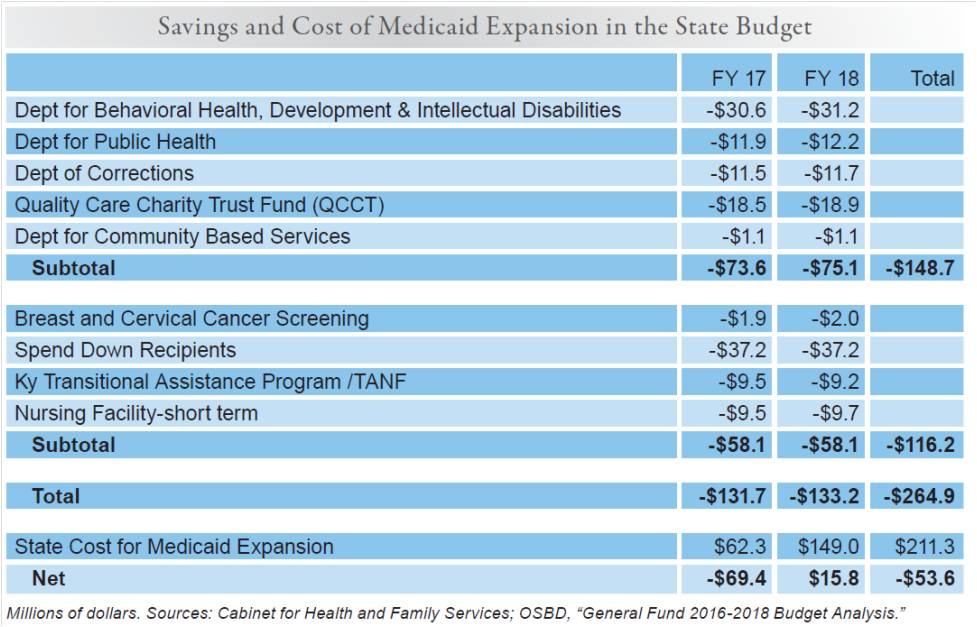 While the administration claims that Kentucky’s Medicaid program is “unsustainable,” in fact Medicaid is a big benefit to Kentucky as it fills critical coverage gaps, improves health, injects dollars into communities and saves money in the budget previously spent on the uninsured.

Medicaid Is Helping Kentucky Cope with Economic Changes
Medicaid costs aren’t up because of any flaw in the program, but because of the impact of more people qualifying for Medicaid in a challenging economy.

The bottom fell out in the Great Recession, with 119,000 Kentuckians losing their jobs. Even though Kentucky’s unemployment rate has since dropped to 5.8 percent, the real employment situation remains depressed and some sectors like coal continue to decline. As a result, there were 137,380 more Kentuckians receiving traditional (non-expansion) Medicaid in 2015 on average than there was before the recession in 2007 (797,035 vs. 659,655), which is a 21 percent increase over that time period.

Even before the Great Recession, the number receiving Medicaid was elevated in part from the recession of the early 2000s. In the year 2000, when the economy was particularly strong, only 556,701 Kentuckians were covered by Medicaid.

Medicaid has helped cushion the economic blow. Because of Kentucky’s successful implementation of Medicaid expansion, the state led the nation in 2014 for its decline in the share of people that are uninsured.

It’s not just people who are out of work because of the downturn who are helped by Medicaid. The majority of those who’ve gotten coverage because of Medicaid expansion are workers. They’re employed in low wage jobs in industries like restaurants, construction, temp agencies and department stores, and either aren’t offered or can’t afford coverage through their employer.

It’s been the trend over the last few decades for fewer employers to offer health coverage. At the same time, wage growth has been stagnant, making it hard for workers to afford employer-based care even when it’s available. The share of Kentucky workers with employer-based coverage dropped from 70 percent in 1980 to 56 percent today, according to Bureau of Labor Statistics data.

Lack of coverage is one of the factors that contribute to Kentucky’s poor health indicators, which are a barrier to workforce participation and economic growth. By providing the coverage necessary for care, Medicaid can help address that challenge.

Medicaid Expansion is a Good Deal for the State
Factors contributing to Medicaid cost growth other than these economic trends aren’t crises for the state budget — especially when the whole picture of those costs is understood.

Besides the economy, another reason traditional Medicaid enrollment has gone up recently is the so-called “woodwork effect,” in which some of the uninsured who in previous years would have been eligible for Medicaid but not enrolled have signed up for coverage, in large part because of the publicity around health reform and the success of Kynect outreach. This effect is happening to some extent in all states, whether or not they have expanded Medicaid. It’s a one-time bump in costs for services people were already eligible to receive, and those costs won’t keep growing at the same pace.

State costs will go up in future years as the match increases (growing from 5 percent of costs in 2017 to 10 percent in 2020). But there are also other benefits to the budget as the state improves its health status through expanded access to care and as jobs are created to meet the increased demand for care. Over $2.9 billion has flowed to health care providers because of Medicaid expansion and many thousands more people are getting preventive treatment, and it’s showing up in job growth in the health sector. Also, everyone saves when fewer people let health problems go untreated only to use expensive emergency room care later.

Far from being a burden, Medicaid plays a key role in the overall system of health coverage. The program and its expansion are a good deal for Kentucky. It’s bringing federal dollars into local economies throughout the state at a time they are desperately needed, securing more Kentuckians from the financial calamity that comes with serious illness or injury and providing care that will contribute to better health over time.