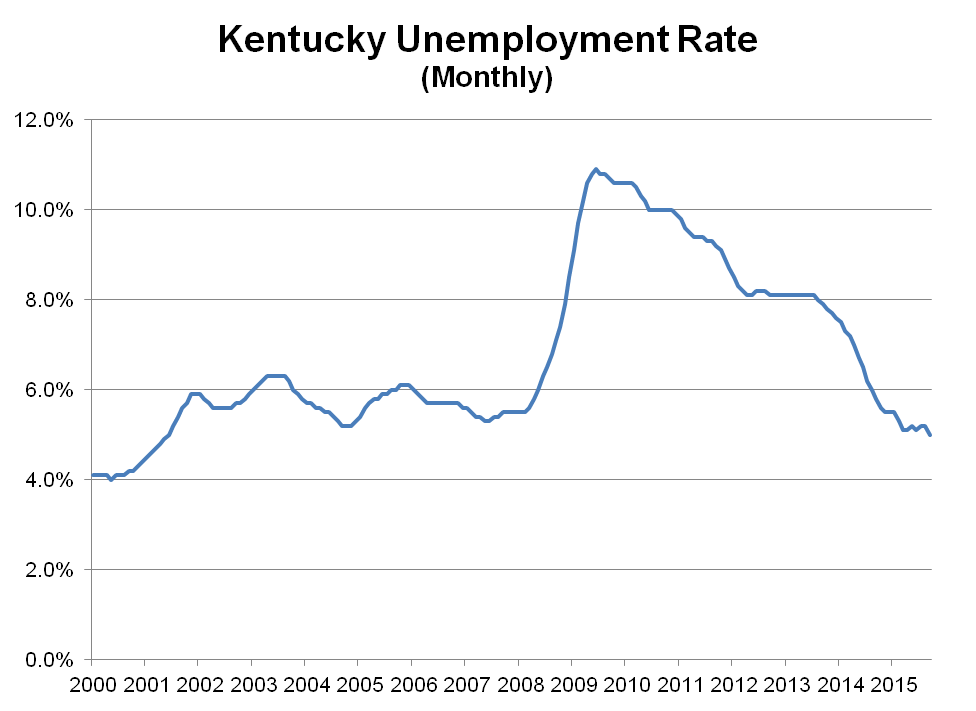 There’s a big inconsistency between Kentucky’s declining unemployment rate — now at five percent, the lowest level since 2001 — and the fact we still have many fewer people employed as a share of the population than before the Great Recession hit in 2007. This issue came up in the election and can be seen in the stark difference between the two graphs below — the unemployment rate shows full recovery from the recession, while according to the employment to population ratio things are still getting worse.

Those defending the unemployment rate as better reflecting the strength of the economy will say the difference between the two graphs can be explained by demographics. The baby boomer population is beginning to retire and that’s shrinking the labor force, which is not accounted for in the employment to population ratio (which counts people whether they are looking for a job or not). And the trend of aging baby boomers is undeniable.

But a close look at the numbers shows many working age people still missing from the labor force. 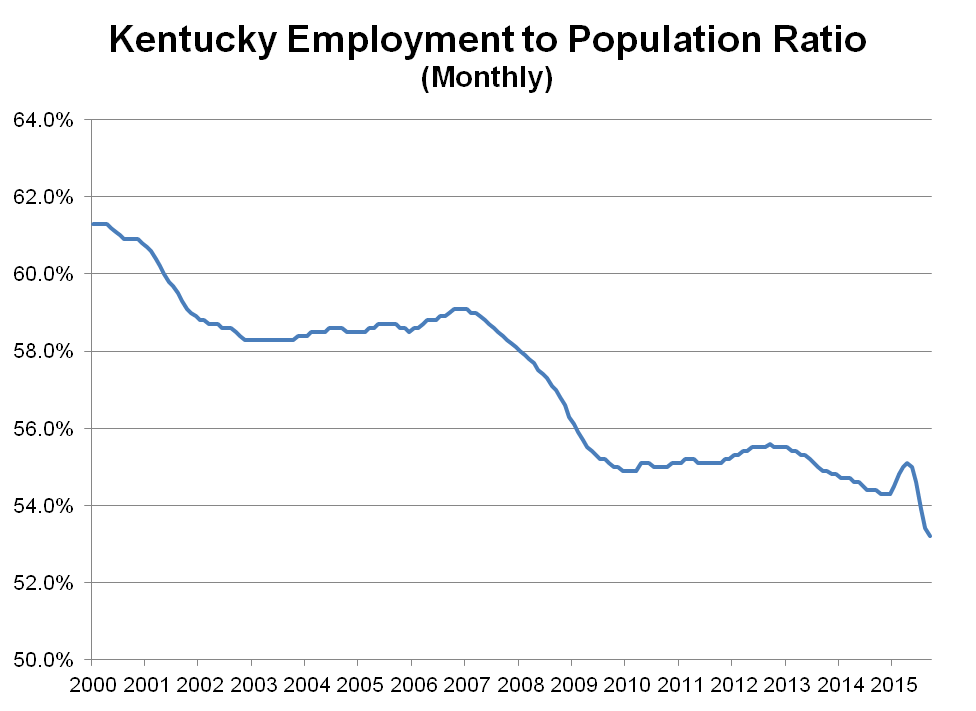 That can be seen by looking at the employment to population ratio of prime age workers — those ages 25 to 54. One economist calls that measure the “desert island” statistic (the one you want to take with you to a desert island), because in many ways it’s the best indicator of the strength of the employment situation currently. An aging baby boomer population is factored out.

By that measure, Kentucky is still far from full recovery and substantially behind where we were before the recession, as seen in the graph below. In the third quarter of 2007, 75.9 percent of Kentucky prime age workers were employed compared to 69.6 percent in the same quarter of 2015. That difference of 6.4 percentage points is equal to about 110,000 fewer people with jobs (for comparison: Kentucky lost about 120,000 jobs in the Great Recession). 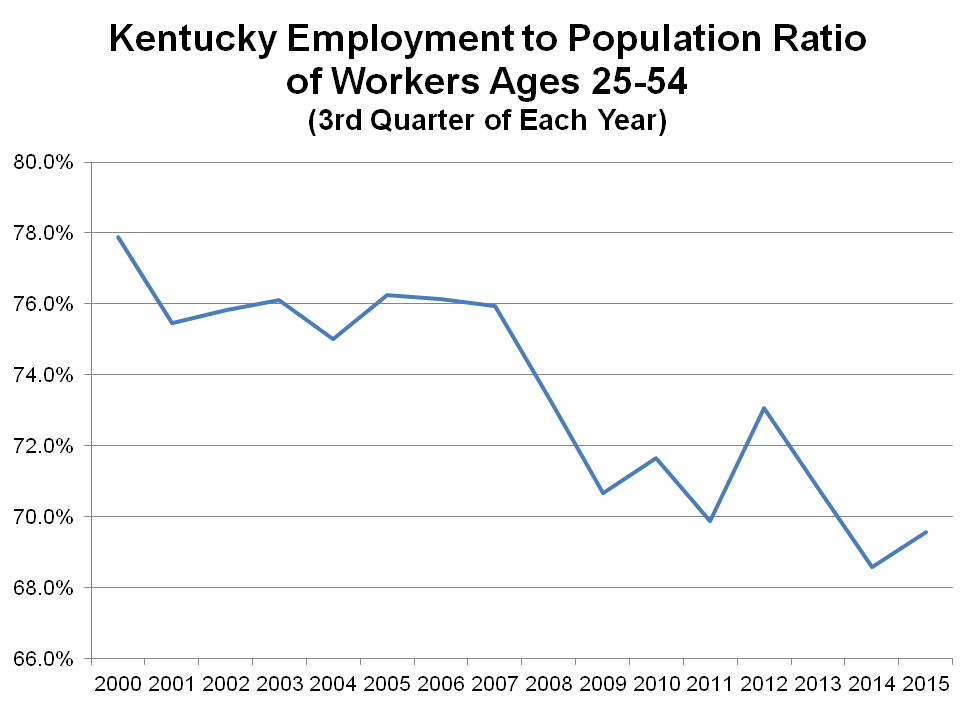 In fact, Kentucky has the second-worst prime age employment-to-population ratio in the country, lower than every other state but West Virginia. 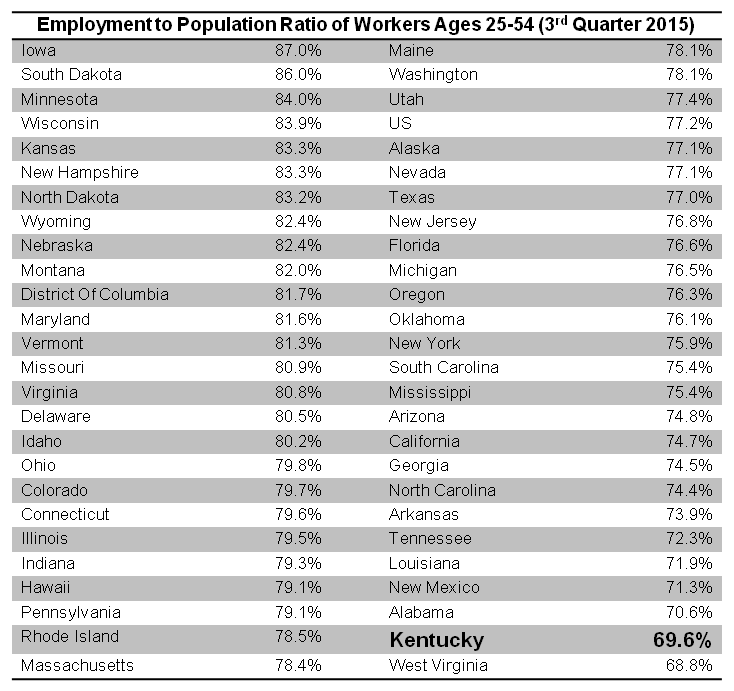 So an aging baby boomer population can’t fully explain why a smaller share of people have jobs than before the recession despite our low unemployment rate. There are a variety of reasons workers between 25 and 54 might not be working or seeking work — they could be in school, caring for children or dealing with health problems. They could face significant barriers to work, like lack of access to affordable child care, family leave or transportation, or a criminal record that makes many employers unwilling to consider them.

But in the current context, there’s also the simple challenge that there still aren’t enough jobs available, especially in certain parts of the state. Kentucky as a whole has only two percent more jobs than it had before the recession hit eight years ago with an adult population that is five percent larger. An extended shortage of jobs has led some workers to become discouraged. Many would likely be willing to re-enter the labor market if more jobs were available, just as they did in much bigger numbers in the early part of last decade.

The talk about jobs in Kentucky shouldn’t be too quick to celebrate victory on the recovery. The lack of jobs persists and more must be done to increase those numbers. If the conversation was in touch with reality, we would be talking about expanding public investment — especially at the federal level — in infrastructure, land remediation, human services and more as part of a strategy to drive our economy back to truly full employment.