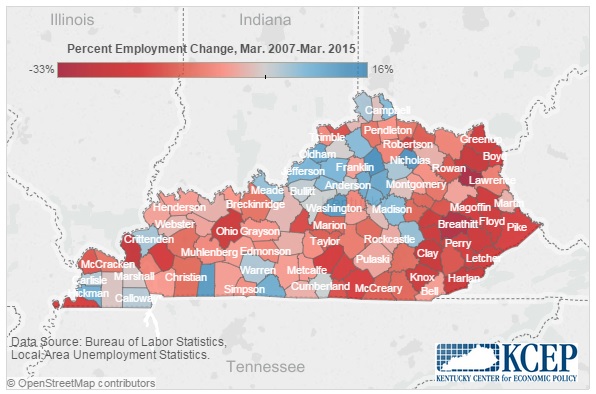 Job growth in Kentucky has picked up over the last year, and every county saw a decline in its unemployment rate from March 2014 to March 2015. However, a closer look shows that the economic recovery is not spread evenly across the state, but is concentrated in a minority of counties in more prosperous parts of Kentucky.

Only 28 of the state’s 120 counties have more people employed in March 2015 than in March 2007, before the recession hit. As the map below shows, those counties where the growth in residents employed has been strongest are mostly clustered in central and northern Kentucky. Big job gains (in both percentage growth and raw job numbers) are in counties like Scott, Oldham, Woodford, Jessamine and Campbell, along with the large counties Fayette and Jefferson.

To view a larger version of the map, click here.

While Kentucky’s overall economy is showing improvement, the recovery is not being felt equally by different regions of the state. The more-populated areas close to major transportation networks have seen job growth in sectors like health care and education, a rebound in the auto industry and resurgence in industries like transportation and logistics. Rural Kentucky, meanwhile, falls farther behind as traditional industries like coal and marginal branch plant manufacturing have declined and not been replaced.

We need continued growth in the overall economy to pull those counties further up. And we need to invest in targeted strategies to create new jobs in rural areas—through SOAR and other efforts and by embracing ideas like the Power+ Plan—or Kentucky’s geographic divides will continue to widen.