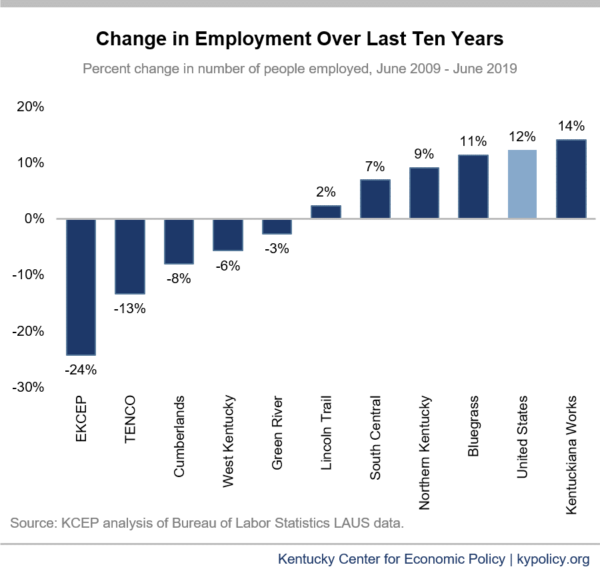 A recovering economy since the Great Recession has bypassed much of rural Kentucky and especially the eastern and northeastern regions of the state. Those conditions magnify the harm from current and proposed cuts to safety net programs like nutrition assistance and Medicaid, and make critical the need for new policies that effectively create jobs.

The graph below shows the percent change in the number of people employed compared to 10 years ago in each of the state’s workforce development areas (map of those areas here) and the United States as a whole. While central and northern Kentucky are performing above or near the U. S. average, rural districts have lagged behind. That is especially the case for the 23 counties of the Eastern Kentucky Concentrated Employment Program (EKCEP) workforce area and the 10 counties in northeastern Kentucky (TENCO).

In addition to the economic harm caused by the recession, southeastern Kentucky has seen remaining coal employment collapse due to competition from cheaper natural gas and other alternatives. The northeastern region has lost manufacturing jobs due primarily to trade pressures and policies. Budget cuts at the state and federal levels have also forced cuts in local public sector employment. The drop in spending from paychecks has had a ripple effect in job loss at businesses serving the local economy. Thousands of people have fallen out of the labor force as a result and therefore are not counted in the unemployment rate, or have moved away.

There is no recent improvement in these numbers, either. From June 2018 to June 2019, employment in the EKCEP region fell 2.5% and in the TENCO region 1.4%. And the region may not have hit rock bottom yet, as suggested by the recent, high-profile coal company bankruptcies. The state has touted several announcements of new manufacturing projects in east Kentucky, but they have largely failed to materialize or are of questionable viability.

Despite this evidence of economic hardship in big swaths of the state, Kentucky is moving forward with new requirements that for the first time mandate adults without dependents in every county report work in order to continue receiving SNAP benefits. As a result, over 21,000 people have already lost food assistance. The administration is seeking similar barriers to Medicaid that will lead to loss of health coverage and a reduction in regional health care spending. There are also legislative proposals to severely restrict access to unemployment insurance and other aspects of the safety net. By taking dollars out of communities, these policies further weaken local economic conditions.

Instead, the region needs policies that support local job creation. While the broader U. S. economy benefited greatly from the coal and manufacturing produced by eastern and northeastern Kentucky, their decline has been met with too little in the way of governmental transition assistance. Initiatives like the POWER grants through the Appalachian Regional Commission have helped support new ideas, but the scale of public investment so far is a fraction of the disinvestment the region has been facing.