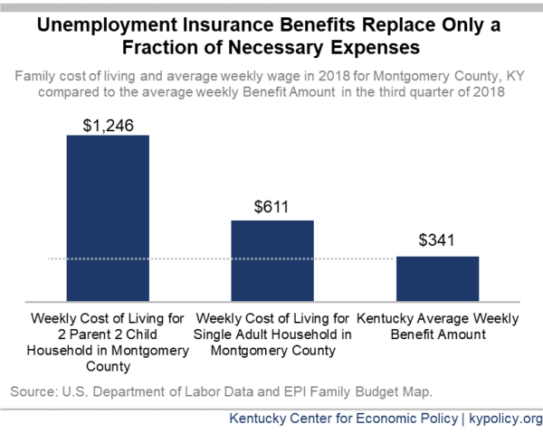 New bills filed in both the Kentucky House and Senate would severely cut unemployment insurance for Kentuckians who lose their jobs, reducing benefits by 20 percent for the average unemployed worker. Unemployment insurance helps workers get by while looking for another job by replacing a portion of lost wages. While Kentucky’s benefit is not very generous, replacing less than half of wages on average, it provides critical support that keeps local economies afloat and helps workers continue building a career.

Unemployment insurance (UI) is a modest benefit. Currently, only one in five unemployed Kentuckians receive UI, and they can draw on those benefits for up to 26 weeks — but only a third of claimants are unemployed for that long. The benefit is based on a percentage of the wages earned over the previous year, and only replaces roughly 45 percent of what the average claimant earned prior to being laid off.

Having this income support helps workers get by while looking for a job within their career field. It is not enough, however, to serve as a disincentive to claimants seeking a new job. Using the Economic Policy Institute’s Family Budget Map, a 2 parent, 2 child household in Montgomery County needs a weekly income of $1,245 to have a modest but secure standard of living. Using the state-wide average weekly benefit amount ($340.66), UI would only meet 27 percent of that family’s need. It covers only 56 percent of the cost of living for one adult with no children.

These bills, which are identical, would cut the allowable benefit weeks from 26 to 20.

By reducing the total number of weeks available to an unemployed Kentuckian alone, the legislation would effectively create a 23 percent cut to total potential benefits. That would place Kentucky among the handful of states with the harshest limit on the duration of benefits: all but 7 states in the country offer 26 weeks of benefits or more.

They would cut benefit amounts by 25 percent every five weeks.

The bill would steeply phase down benefits every five weeks, initially starting at 125 percent of the calculated benefit amount, then dropping to 100 percent at 5 weeks, 75 percent at 10 weeks, and just 50 percent at 15 weeks.

They would cut the weekly benefit rate by another 11.5 percent.

By reducing the weekly benefit rate from 1.1923 percent of the base period wage (the most recent four quarters prior to filing a claim) to 1.0555 percent, the state would be slashing benefit amounts for laid-off Kentuckians at every income level.

For the typical claimant, the cumulative result of these three changes would add up to a cut of 20.4 percent, or $1,318. The total potential benefit amount would be slashed by 40.5 percent, or $3,581 under the average weekly benefit. 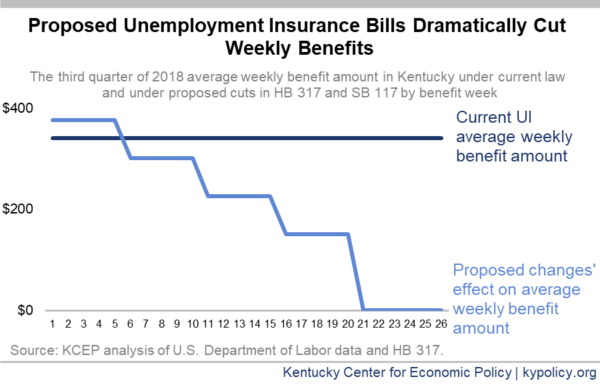 They would slow the growth of the maximum benefit amount.

In addition to cutting benefits in the immediate term, the bills also slow the rate at which the maximum benefit amount could be increased, which would hamper the program’s ability to keep pace with cost increases in the broader economy.

Quickly finding a job in Kentucky isn’t easy, especially in rural counties and for those facing barriers to employment

While the economy and job market have been slowly improving, the recovery has not been equally distributed throughout the commonwealth. Since December of 2007 — the beginning of the Great Recession — job growth in metro counties has climbed by 8 percent, while it has dropped by 8.2 percent in rural counties. A shortage of jobs means it takes longer to find a job in rural parts of the state that have yet to catch up. In fact, the U.S. Department of Labor still designates 55 areas in Kentucky, mostly rural counties, as Labor Surplus Areas, where there are more workers than available jobs. 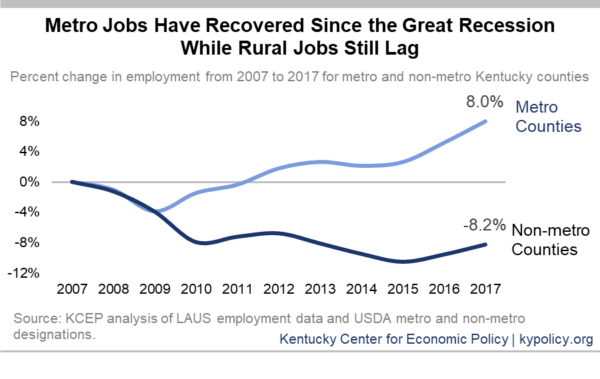 In some parts of the state, job loss is as high as 31.5 percent, and regionally, the counties hardest hit are those in eastern and northeastern Kentucky where mining and manufacturing industries have shed thousands of jobs over the past decade. In fact, manufacturing was the second highest industry with UI claimants as of December 2018 after only construction, which experiences regular, seasonally high UI claims in the winter. So the impact of the proposed cuts would be felt most strongly in the rural parts of the commonwealth.

Other Kentuckians facing barriers to employment would also be disproportionately harmed by the proposed cut to benefits, including people with a felony record, Kentuckians with a disability, those with less education and people of color facing discrimination in labor markets and other race-based barriers to employment. Black Kentuckians comprised 14.2 percent of total UI claimants in December of 2018, but represent only 8.1 percent of the population over 16 years old. A black Kentuckian was twice as likely to require unemployment insurance as a white Kentuckian that month.

Unemployment Insurance is one of the most effective tools we have to keep workers in their field of expertise, combat economic hardship and keep our economy moving forward. There is no need to make cuts or hamstring our workers now, or our ability to dig out of a downturn in the future. Lawmakers should support Kentucky workers and communities by maintaining the integrity of UI, and rejecting these radical and harmful proposals.