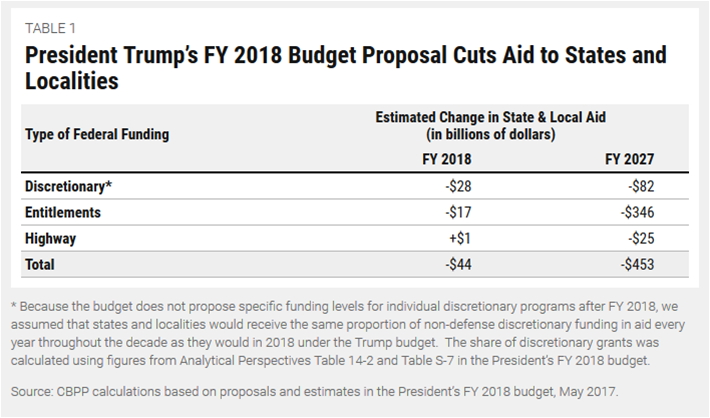 President Trump’s budget proposal dramatically shifts costs to states they will be unable to afford, as shown in reports released this week by the Center on Budget and Policy Priorities. At the national level the cuts mean states and localities would immediately need to come up with the equivalent of more than five percent of state General Fund budgets to maintain the programs the federal government is shedding. Because the proposed cuts grow over time, what states need to assume responsibility for will grow to the equivalent of 37 percent of state budgets in 2027.

Given Kentucky’s continuing budget difficulties, our state will be especially ill-equipped to make up for proposed cuts to critical federal programs in the President’s budget, programs that support low-income families with children, people with disabilities and seniors — resulting in more Kentuckians being driven into poverty.

The table below from one of the new CBPP papers shows the cumulative impact of these cost shifts at the national level, with cuts to entitlement programs (the budget proposes cuts to Medicaid, SNAP food assistance and Temporary Assistance for Needy Families and the elimination of the Social Services Block Grant) as well as non-defense discretionary programs such as workforce development funding.

Kentucky — along with more than half of states — is already struggling to close gaps between ongoing costs and flagging revenues in our own budget. We are in no position to replace the funding that would be lost in the Trump budget proposal. On top of round after round of state budget cuts since 2008, our state is currently facing a $113 million revenue shortfall and unbudgeted Department of Corrections expenses of around $35 million for this year. In addition, the state is working to increase funding for its struggling pension systems. While we expect a special session to be called in the coming months on tax reform, it is unclear whether a plan that would genuinely and sustainably raise revenue will be proposed or passed. And in addition to pensions, any new revenue is greatly needed to invest in critical areas like education and child protection that have already experienced harmful cuts in state funding. Kentucky’s state budget isn’t able to meet its existing needs, let alone take on the additional costs that would result from President Trump’s budget proposal.

To prevent cuts to SNAP food assistance, for instance, Kentucky would have to come up with an estimated $245 million for the proposed required state contribution of 25 percent in 2023 and each year beyond; the total federal cut to SNAP in Kentucky in the budget over the next 10 years is estimated to be $1.7 billion. As noted in the new CBPP paper on the cost shift in SNAP, if the state wasn’t able to come up with the required portion it would have to cut benefits. For instance, if Kentucky couldn’t come up with any of the estimated $245 million in 2023, benefits would fall by about $60 a month per person on average. Currently the average SNAP benefit per month for each household member in Kentucky is only $123.

According to the paper, the impact of these cuts include:

While SNAP food assistance cuts in the President’s budget are particularly large, low-income Kentuckians would also be hit at the same time by deep cuts to other critical poverty-reducing programs and low-income supports including Medicaid.

In President Trump’s budget proposal, state grants for workforce development activities for youth, adults and dislocated workers in Kentucky — through the Workforce Innovation and Opportunity Act (WIOA) — would be cut by 40 percent (a $16.3 million cut to Kentucky) in 2018. In addition, Employment Service (Wagner-Peyser) state grants would be cut by 38 percent ($3.2 million).

The table below details what it would cost our state to continue services funded by several federal programs completely eliminated in the Trump budget in 2018: 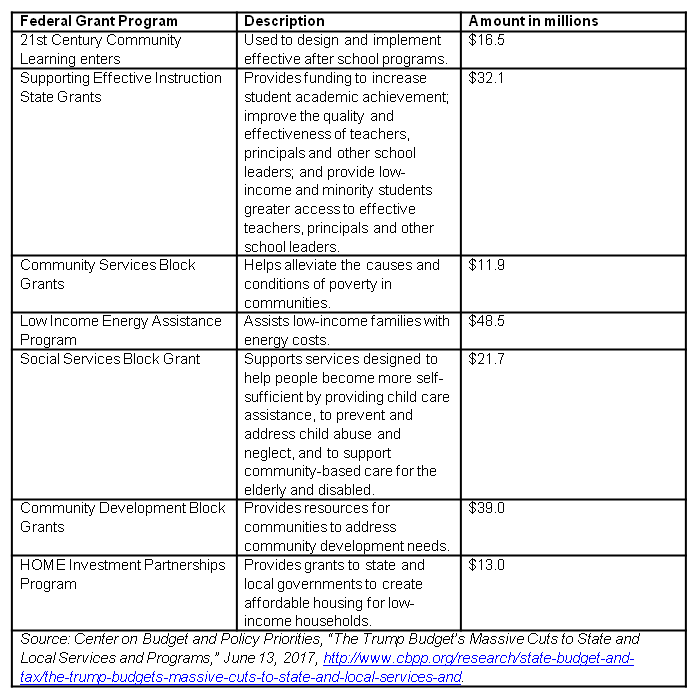 As a result of the Trump budget’s cuts and the state’s inability to take on these new costs, low-income Kentuckians would simultaneously be more likely to go hungry and less likely to have health coverage, housing and access to job training, among other services that help meet basic needs. Cuts to these federal programs, which help to alleviate poverty and enable economic mobility, would be especially costly in the long term as they could lead to declines in health, educational achievement and employment in Kentucky.